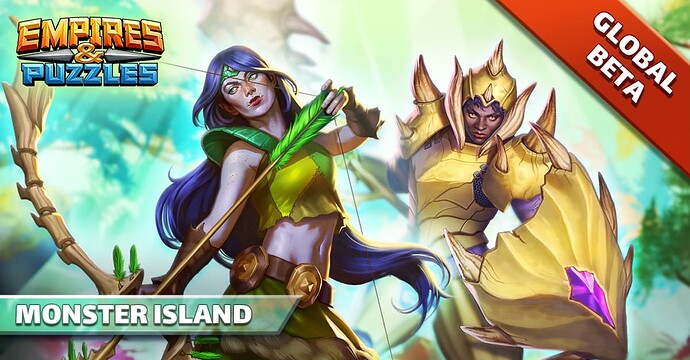 Purpose of this thread is to provide {fairly} comprehensive information regarding the new feature titled the “Monster Island”, specifically the Global Beta planned for the start in November, 2022.

Due to stability concerns, the first global beta will be conducted on a slightly limited scale, with only Alliances with an Alliance Score above 120,000 being sent to survey Monster Island.

Ending dialog after the event ends

The following is the timeline for the Global Beta:

This brand new mini game inside the Empires & Puzzles.
You can work together with your Alliance and explore Monster Island.
Your alliance can earn points by discovering new areas, defeating enemies, and opening chests
Rewards are based on global Alliance rank and event difficulty

There 3 difficulties, and alliances are assigned an event difficulty based on their Titan performance
Each difficulty has a different leaderboard, and rewards are based on difficulty.

The event uses a brand new “Monster Island Energy”, and each operation uses that energy. 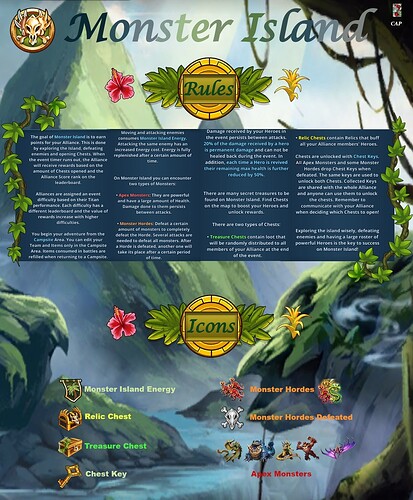 The battle takes place on the Monster Island ! 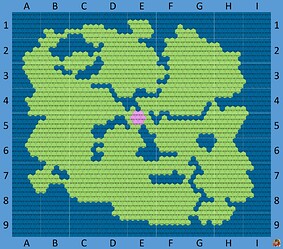 The Map consist of sectors, which are marked from A to I and from 1 to 9.
Each sector consist of Map hexagon cells (about 1200 in total), which can be any of these:

The guide by @Cap about the Map: 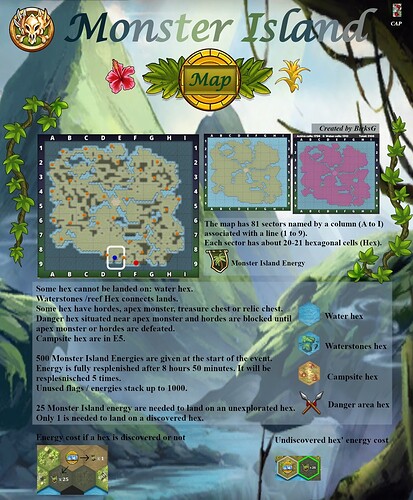 There are two kind of enemies:

The first attack of any enemy takes 10 Monster Island Energy, and each additional fight with the same enemy increases the needed energy with 15.
So energy on cost needed on consecutive fight is 25, 40, 55…
Hordes are respawn after a certain amount of time, and when they respawn the energy needed on the first attack is reset to 10.

20% of the attacks by enemy is permanent. 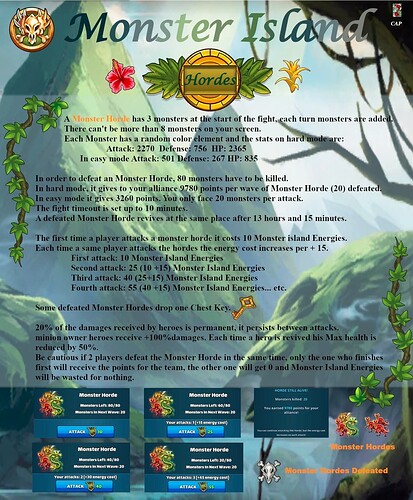 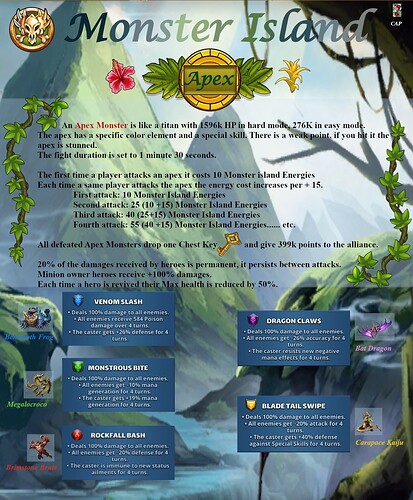 You can find two type of chests on the map:

Both of them can be opened by Keys which your alliance receives by defeating Apex Monsters and you may receive it by defeating Monster Hordes.

Any of your alliance members can use the found keys . 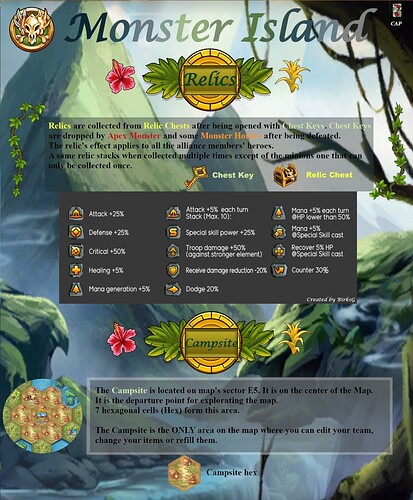 It is different for each difficulty, and rank based. 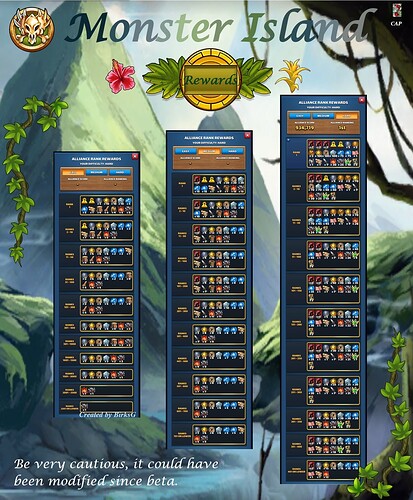 Rewards for each collected Treasure Chest

You will get these for each collected Treasure Chest on hard difficulty:

There is no portal attached to the Monster Island event.

@BlackZed shared a video about how it looks like in Puzzle Combat, and this is similar to how it is in Beta.

This is ‘monster hunter’, the puzzle game

seemingly aka “don’t get your hopes up for much more when the alleged ‘placeholders’ are swapped out, unless maybe you’re already in the top 100 alliances in the game, and if you are, the reward will definitely be insignificant compared to what you already have”

yes I am looking at you W3K

Just checking if you’re missing Malin and Kai from the Plains Hunter family?

Inspired by that actual game. Just as this game inspired other games in some way or other.

I would just try this “new” concept for the loot from the treasure chests. For what they are worth.

Fair to say, which is why I was curious on the other thread how many chests are reasonably feasible (and how they are distributed, does every player receive the reward in each chest, etc.) to have some idea what the payoff might be.

We will find out eventually. For now I am happy to share that I managed to pigue my long retired Game GF to have a go with me. Out of curiosity.

Hopefully I will get a few summon coins and tokens from this beta. Not banking on placing well at all.

Just as this game inspired other games in some way or other.

By that you mean completely rip off

That game that shall not be named in this forum 100% ripped off e&p
You played MH, what weapons do you main? Malin looks like she’s using an insect glaive

I didn’t play MH but I played other games that had events inspired by MH.

As for those clones that ripped offThis game,

The following is the timeline for the Global Beta:

Will Monster Island always be on a sign-up basis or is this only for global beta? Thank you

to all Alliance members

to ALL alliance members, or only those who signed up?

Hopefully people will like this event and live-game rewards will be “rewarding”.

Any idea on the specific criteria for assignment to each of the difficulty levels?

Will Monster Island always be on a sign-up basis or is this only for global beta? Thank you

In Beta we do not need to sign up individually.

If you are in an alilance, then you will able to participate.

to ALL alliance members, or only those who signed up?

As everyone is considered to be signed up in the alliance.

Hopefully people will like this event and live-game rewards will be “rewarding”.

In this Global Beta similar (not so good) rewards are expected as in normal Beta based on the message from Petri what I quoted in front of the Rewards section.

Any idea on the specific criteria for assignment to each of the difficulty levels?

I could just guess, but my guess is as good as anyone else.

Thx, I have added them to the OP.

Thank you, @PlayForFun! Appreciate all your hard work keeping us well informed.

Thanks for the info …

Sorry if it’s been stated, but will there no new heroes to summon during this event given there’s no portal?