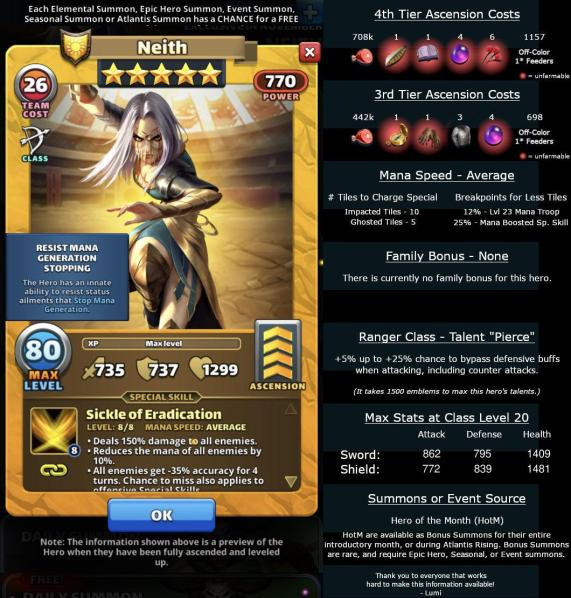 As Neith has been released for between 12 & 24 months, she can be summoned from both the Atlantis Portal (October 2020 & October 2021) and in the Tavern of Legends Portal.

She can also be “Trained” using the Hero Academy Level 10.

It’s important to remember that the Tavern of Legends Portal has the lowest odds for a specific hero of ANY portal… No amount of summoning will guarantee a Featured Hero.

You have a 0.25% chance of summoning a specific Featured Past HotM from the Tavern of Legends Portal (0.0125% for a specific Non-Featured).

Is Neith worth Summoning For?

NOTE, you can currently only get Neith from the Tavern of Legends or HA10; or in September 2021 Atlantis.

How many copies of Neith would be useful to keep & Level?

What do you think Neith’s Primary Purpose is?

What do you think of Neith compared to other Heroes?

How does Neith’s Special Skill and Intended Purpose match her Base Stats?

Is Neith worth giving Ranger Emblems to?

In Defence, where do you think Neith is best used?

How do you think Neith is best used?

I’m a longtime Neith fan here, I think she is pretty underrated myself. Her damage is mediocre but the main appeal she has for me is blinding all enemies at average speed.

She’s pretty easy to bring to 9 tiles after that thanks to her innate mana link – I use a level 15 mana troop on her, which does mean a 10 tile skill at first, but afterwards it becomes a 9 tile skill which at 4 turns is pretty easy to set up continuously.

I remember really liking her with Sif as well when I played beta since both their speed buffs stack and you can get to a +28% mana speed buff before troops, meaning your average heroes affected by both link and mana buff now charge in 8 tiles. If you’re lucky enough to have both I would recommend trying that combo out.

Another fun combo I am lucky enough to enjoy for offense is Guinevere + Neith + Leonidas. That string of skills takes out 30% mana of all enemies, and the target Leo hits goes back 70% mana. Even at average speed this sometimes feels really silly, I’ve had war matches where my opponents never fire.

Anyway I think Neith is an underrated support hero myself, and I would level another one if I had one. Blind does require luck but a miss coming in clutch can be very gamechanging.

I don’t have her, but she is one of the most difficult heroes for me to face. Maybe that is specifically because of my team config - I rely on Proteus to block mana, Grazul to block status ailments and and Lady Loki to throw them back. Neith is immune to mana block, her mana cut can’t be blocked or reversed, and while blind can be reversed it is unreliable as it is in effect at the start of the special and only seems to get cleansed at the end.

All in all I would rather avoid a defense with Neith in it, more so than any other hero I can think of including BK, Jabber, Finley, Killhare, Master Lepus (I am not including GTV here as I actively hunt out GTV)

Blind ailment is incompatible with mana controllers as Merlín or Alfrike. What’s the point of making you ennemies hit themselves if they are going to fail. So if you are used to rely on this type of controllers, Keith and lots of yellows are more of a hindrance.
Now, if your attack pattern is diferent, Neith is ok. I won’t recommend her as a first 5* yellow to ascend. But if you already have a yellow sniper and a good tank of a any color, she is quite useful as a support.
Some 5* are good no matter what’s your gaming preference. Neith isn’t that kind. If she fits in your team dynamics, she is really good with her mana reduction and blind combo.
Saying this, she is not as situational as other heroes either. So not as bad as she looked like when first released, but still not the best one.

I don’t have her but I absolutely hate to fight her. That mana down and blind combo means one turn lost at the very least unless the cleric/monk with cleanse decides to trigger the talent. She is easily neutralized by QoH or BK and she is probably not very useful on offense but I think she deserves more credit than she is given.

Ahh, my first HOTM. She’s now maxed and emblemed (attack path, really :D) and she’s a pretty solid hero, I prefer her over Onatel in my defence team. (But I take Onatel to raids more often).

her mana cut can’t be blocked or reversed

Small correction. It can be blocked by the Red Hood minions

And those protected by Poseidon buff, Seshat, and chance with clerics. Think that’s all, and a fairly small list.

On topic - have her and love using her on both offense and defense. Just to bad my ranger emblems are currently going to Seshat.

Wich emblem path would you take? Not sure myself, except that she is not fit to be a tank.
I am using her in combination with Koon and Musashi. And I love how fast they charge up after her elemental link is active.

I would probably go:

I have drake, c-Joon X2, Leo, onatel, Inari and C-vivi. My Neith is approaching decision time on the fourth chevron(3-55). In the barn is Bai, Justice more of Joons, Onatel and Leo. Drake is my yellow in my def team so Neith or Bai or whoever is more of warrior. So you Neith fans so do I pull the trigger on her or stop at 3-70 and move onto another yellow?

With so many yellows, you will find Neith elemental link very useful. Just play with her in your team before ascending her and find out if she suits your style. Once her link is active, she is closer to beeing fast that average speed.

So what Neith does:

Except for her badish damage (around Vela’s level and being average), I couldn’t see anything wrong with her. Once she fires, you couldn’t fire your mana for a while and even if you could, you might miss the target.
So, what’s bad with her to be honest? I am always impressed whenever I fight against her as a tank.

Neith is annoying as hell on defense if you don’t kill her before her special goes off, I wish I had her.

Neith is underrated, yet at the same time underwhelming. She is a major PITA in the VF format battles when she cuts your mana and blinds you every other turn. Offensively, even though she does a lot of things, she just isn’t impactful enough to use.

I don’t know anyone that thinks she is bad. A couple of us in my alliance have chased her a few times.

This whole topic will disagree with you: Neith needs a buff

Based on my overall experience with this forum, I’m guessing the logic goes something like this:

Neith is not blatantly OP compared to other heroes. Therefore, she is bad.

Because there are a lot of better heroes than her.