This thread is for discussing strategy related to Esme, as well as your thoughts on him. 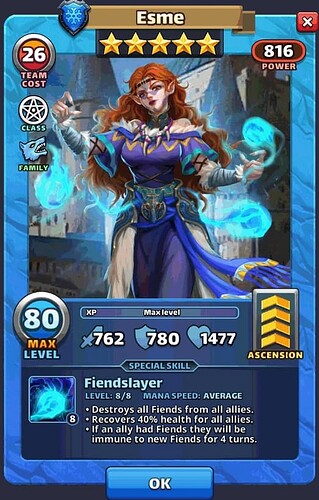 The new heroes form the “Wolf” family and have a family bonus for each unique hero in the team:

There appear to be no changes since Beta.

What do you think of Esme ?

This thread is for thoughts and discussion on Esme.

Based on preferences Forum members have expressed, please try to stick mainly to Esme and not wander off topic too much to other heroes.

*NOTE: Summon Results posted without any commentary/feedback at all should be flagged as Off Topic and removed, based on preferences expressed by the Forum community. Please include some comments about what you think of Esme when posting Summon Results. In addition to opinions about Esme, you are also encouraged to include how many Summons it took before receiving Esme (or how many Summons you’ve done without receiving Esme), so other players are presented with realistic experiences of the rarity of Legendary Event Hero.

Is Esme worth Summoning For?

How many copies of Esme would be useful to keep & Level?

What do you think Esme’s Primary Purpose is?

What do you think of Esme compared to other Heroes?

How does Esme’s Special Skill and Intended Purpose match Esme’s Base Stats?

Is Esme worth giving Sorcerer Emblems to?

In Defence, where do you think Esme is best used?

How do you think Esme is best used?

Ahh, the anti-Elizabeth is here. It was only a matter of time.

I don’t know, she just seem so underwhelming. In a fiendless battle, she’s only going to heal 40% on average speed. One of the worse healers imo, and probably the worse 5* hero of the bunch

You could be right. So guess which one I just pulled?

But it’s not all bad news. I just got a bit greedy and did another 10 and did indeed get Quenell. Funny, I thought she wasn’t all that great either, just reading the card, but my maths skills have never been that impressive…

Anyway, Esme is the anti-Elizabeth, but I didn’t say she was necessarily a good one! Alexandrine (currently 3.28) is definitely going up before her.

Okay, as I mentioned, quenell is batshit insane. So at least you got something out of your pulls. and watch me get like 3 Esme’s later

she is too situational

She’s literally a 5* vanilla Hawkmoon outside of fiends. Not good at all

I don’t know, I agree that she seems the least powerful of them all, but she is a much better healer than Alexandrine and we are in a fiends meta.

I just got her and currently I am pretty satisfied 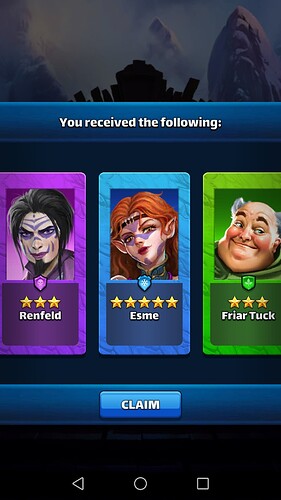 I think here is supposed to be Wolf family. @PlayForFun you are trying again to prove that supposedly only one person and possible human

Thx. I haved fixed it for all other Wolf heroes too.

I like only for fiend removal. Could care less about the heals. They could have done 15% like Grazul and the fiend removal would still be worth it. Between Elizabeth, Hannah, and Motega; the game needed something. Esme healing is on par nothing great for defense BUT offensive she will be great. Situational of course but most healers are situational at best.

She is as close to useless as you can get. 95% of the time, all she will do is heal 40% to all at average speed. If your team has fiends, then that means the opponents heroes are going off and thats a BAD thing. And on top of that, there are only a small handful of actual fiend users in the game. AND on top of THAT, if she clears fiends from an ally, she only gives fiend immunity to that ally and not the whole team, so if she clears hannahs fiends, only those 3 heroes get fiend immunity. She is wayyy too situational and absolutely needs a buff to be useable.

I think you guys are greatly underestimating how clutch Esme can be. If you force Elizabeth to fire, Esme destroys the fiends before she heals, giving you the full amount. Add to that because she just cleared all the fiends, now all your heroes are also immune to new fiends for 4 turns, allowing you to safely force an enemy Hannah to fire and losing half her special because you are immune still.

Then why don’t she just give all her allies the buff instead? On buff booster she’s just going to buff a selected amount of allies with fiends then

pullled Esme on my alt account. If I had pulled it on my main Esme wouldve been used in war teams. But my alt is not a high level account so Elizabeth or Hannah are rarely a raid or war opponent. So yeah, from the small perspective Esme seems quite a bit worse than other blue healers from this level, planning to level more Kiril costumes ahead of her. 40% heal with everything else so dependent upon fiends is of limited use if you never face fiends.

I’m sure season 5 will introduce a new defense meta that isnt fiend dependent and Esme will seem pretty lame.

Situational of course but most healers are situational at best.

Universally healers are never situational, they need to have something else to help support the team throughout the match. Ariel heals 40% health as well, but she cleanses and gives mana gen. In 95% of situations, I rather use Ariel over Esme.

The one thing that really gripes me is that she don’t even have the decency to buff all her allies with the anti fiend effect. It’s like Francine saying just because her allies don’t have ailments at that moment, she’s not going to give her allies the cleanse over turn effect.

If the meta has shifted to fiends in the future, she’ll be decent at most.
This is still an experimental hero, so there will be better healers that deal with fiends over her in the future