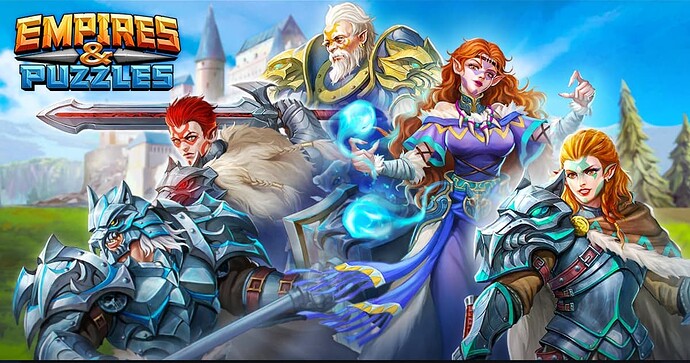 Schedule for the occurences:

A new Event Hazard added to Clash of Knights is this:

The Castle is defended with Incendiary Traps. The traps are triggered every 4 turns. Getting hit by the Incendiary Traps cause your Heroes to Burn and lowers their attack.


As in Villains & Starfall & Slayers heroes the event heroes in the current event have a bonus when they are used in the Clash of Knights Alliance Quest.

As all other challenge events, the Clash of Knights comes with it’s own Summon Portal. See below for information regarding the appearance rates. 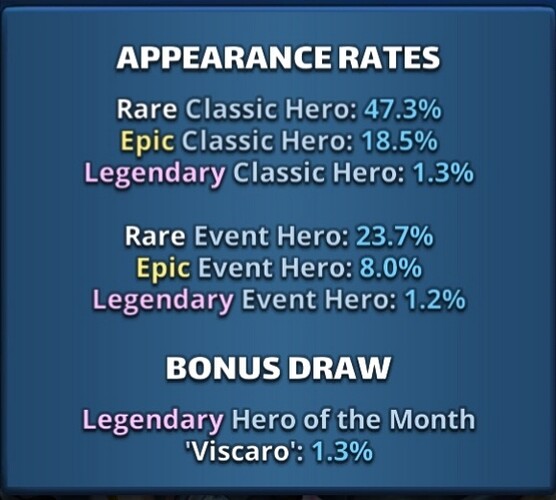 This is the same portal set-up we saw for old challange events. 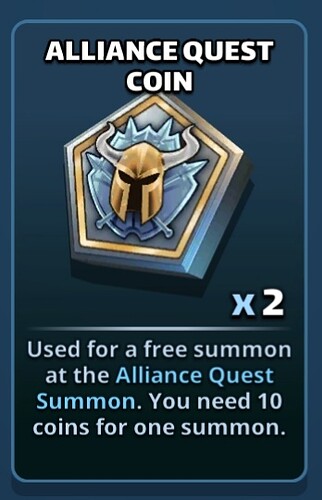 The “Clash of Knight” makes use of a new Alliance Quest Coins currency for summoning.
So far it seems to be there is no Suspicious chests in the event.

There are no Suspicious chests in the event so the only way to get coins is by completing the Quest for the first time.


The Clash of Knight follows the the usual set-up for Challenge Events with 3 difficulty tiers (Rare, Epic & Legendary); It is however, Like LoV and Starfall Circus and Slayers, using the old format of only 10 Stages for each tier.

Guide for the Quest. Credits to @cap 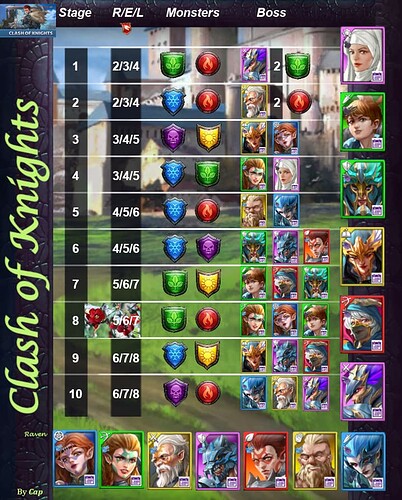 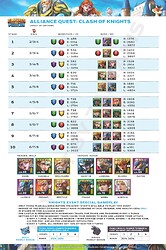 Alliance Quest Score is the combined score of all players in all stages and Difficulty Tiers. Stages can be replayed for the best possible score.

The score from each stage is defined by the enemies defeated, speed of completion and the amount of Hero health left at the end of a stage. Big combos and great matches are also taken into account. Using Continues has a negativ effect on the stagr score.

Gain additional perks in the battles by using the Heroes of this Alliance Quest !

Heroes of the Wolf and Raven families bypass the Elemental Barriers, and have increased attack, defense, an health in battles !

The Castle is defended with Incendiary Traps.
Getting hit by the Incendiary Traps causes your heroes to Burn and lowers their attack. The traps are stronger on ihigher Difficulty Tiers.

*Clash of Knight has a brand new rewarding system.
The scores for all tiers are adding up into a single number, and you receive the loot based on your individual tier and the tier where your alliance’s combined score is in.

Instead of instant Tier Completion Rewards you can open a chest after you complete a Tier.

Should we call this the limit breakers challenge event? If you value LB then this event is for you.

But as with most things top scorers don’t just do it for the loot. Let’s see how high I can rank. Top 10k should be pretty easy. We’ll see if I can push top 1k.

The game is best when you’re in a full alliance. Those who choose to be in smaller ones won’t be able to fully enjoy all aspects of the game.

I have a question: If an alliance member completes all tiers of the event, leaves afterwards to merc and returns before the event ends, does that alliance member still get all loot or does he lose some/all of the alliance/individual score loot? Also does the alliance lose his points as a result?

Is it me or are these rewards an joke?

The completion rewards are definitely underwhelming.

Completion of 30 stages = 10 alliance quest coins/1 pull. In terms of pulls only, this is the least rewarding event.

As for competing, maybe treat this one as a familiarisation run, and next time you and any like-minded teammates can look for a temporary alliance?

I know there are some players who join an alliance specifically to compete on Mythic Titan. Perhaps the same can apply for this event.

Completion of 30 stages = 10 alliance quest coins/1 pull. In terms of pulls only, this is the least rewarding event.

as i read the OP, this looks like the reward is just on opening the tier and not completion, meaning is we unlock the hard mode, we get the total 10 coins and need not complete the hard mode… so that way everyone is accessible to pull one? am i reading right?

I have not tried in Beta, but I believe you need to stay in your alliance during the Quest.
One thing is sure: If you are not in alliance, then you will not able to play any levels.

as i read the OP, this looks like the reward is just on opening the tier

There is chest, which looks like a chest in the Tower events at the end of each tiers, which you can open on completing that tier.
If you complete all tiers, then you will get 10 from these new coins in total.

Instead of instant Tier Completion Rewards you can open a chest after you open the Tier.

i read this and got confused…lol

Instead of the usual challenge event completion loot mechanism (where loot is automatically given upon completion), it seems like Ninja Tower and Tower of Magic. That is, you have to click on the chest to receive your reward.

To me it seems that the rewards are way smaller compared to even completing an ordinary challenge event, whereas the restrictions to stay in one alliance for 5 full days (I believe the event will start on Wednesday morning and end on Monday morning) are too big. That may not be true for the top alliances ofc, however for the smaller alliances and players…IMO not worth it. Also no Rare-3 stage to replay…also aethers color and type is once again random…seems like a big NO unless the rewards differ from Beta.

I may have missed it but I don’t see any mention of how frequent this quest will be. Is there any information regarding that? Is it a monthly thing?

Our Alliance counts 27 players but about 40% is active like myself and the rest is more occasionally which is fine by me. Because of that most dont have a lot of levelled 5* so i dont expect my Alliance to be able to get to Legendary mode in this event. I dont wanna kick them or leave my own Alliance for this reason but I do like to compete in this is event…

i read this and got confused…lol

Sorry, for the confusion.
I have rephrased that.
So after completing you will not automatically receive the reward. You need to open a chest.

This lets you to open the chest even if you can not unlock the next Tier.

A player can get about 1-1.2 million score by completing Rare + Epic.
So your alliance should able to unlock Legendary as 9-10 active players is enough to do it.

As we see now this will alternate with the Tower events.
How often will be this event ?
I am not sure.
I suspect another Quest like this later.
So maybe we will have each tower and alliance quest once in every 4 months (4 * 28 days = 112 days to be more precise)

But this is just a guess from me.

In the Quest you can see the ranking by alliance score, ranking by individual score, and you can also view what is the score of your alliance members

I do NOT like this, especially the bit about being able to view what is the score of your alliance members.
In alliances that are less kind than my own, this has the potential to cause some nastiness towards weaker or less active members!

Yeah, it can raise tension especially if the Alliance can not unlock Legendary so none of them member can compete in individual leaderboard.

I have raised this concern too in Beta.

Well I hope that the alliance I lead will be okay. I’m not too pushed about getting a high rank. Would be curious to see if we can manage to unlock legendary though.

Okay thanks for the info!