This thread is for discussing strategy related to Ludwig, as well as your thoughts on him. 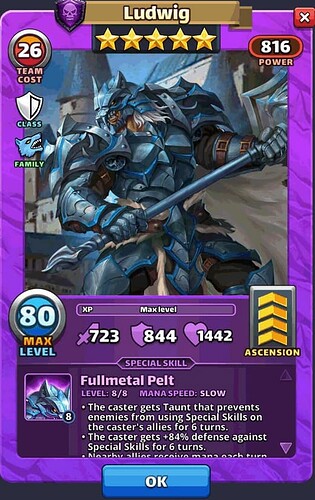 The new heroes form the “Wolf” family and have a family bonus for each unique hero in the team:

There appear to be no changes since Beta.

What do you think of Ludwig ?

This thread is for thoughts and discussion on Ludwig.

Based on preferences Forum members have expressed, please try to stick mainly to Ludwig and not wander off topic too much to other heroes.

*NOTE: Summon Results posted without any commentary/feedback at all should be flagged as Off Topic and removed, based on preferences expressed by the Forum community. Please include some comments about what you think of Ludwig when posting Summon Results. In addition to opinions about Ludwig, you are also encouraged to include how many Summons it took before receiving Ludwig (or how many Summons you’ve done without receiving Ludwig), so other players are presented with realistic experiences of the rarity of Legendary Event Hero.

Is Ludwig worth Summoning For?

How many copies of Ludwig would be useful to keep & Level?

What do you think Ludwig’s Primary Purpose is?

What do you think of Ludwig compared to other Heroes?

How does Ludwig’s Special Skill and Intended Purpose match Ludwig’s Base Stats?

Is Ludwig worth giving Paladin Emblems to?

In Defence, where do you think Ludwig is best used?

How do you think Ludwig is best used?

The most important question is though: Does Ludwig have a wig?

Up to this point they released OP heroes, now the power creep has surpassed that so they started releasing broken OP heroes now. Great. He is the new Telluria.

6 turn taunt with potentially a 50% chance it cannot be dispelled. Oh and everyone gets 100% mana during the taunt. Sounds like a blast to face. Instant death for hero with a special is the next logical step in future portals.

The only real counter to this one is buff preventer. Mist is the best, as she is also holy, albeit 4*. Thank god I have Onyx.

Just imagine this guy being flanked by Heimdall and a slow hard hitter, or even another healer, if you dont get the yellow tiles instantly you are dead because he keeps charging his flanks.

I think his hard counter would be Mist+Onatel, because Onatel could steal all the mana he gives.

Lepiota is a good counter, even though she is purple.

True. And let’s not forget about Hansel/Gretel/Peters/Tettukh/Merlin. Miki can be technically one but he’s slow, so harder to use. Alfrike is too slow. And all but Lepiota can be cleansed.

Cant wait to face a LB one with 20 emblems in a ‘very fast’ tourney or war.

I dont think he can be effective in vf. As he only gives the max amount of mana when the effect has ran its course.

Cant wait to face a LB one with 20 emblems in a ‘very fast’ tourney or war.

Flanked by Alfrike and Lady of the Lake.

Well, all surrounding heroes will get a super every 2 turns basically. Thats bonkers.

The whole hero is absolute bonkers. No yellow tiles and he can make slow and very slow heroes go apeshit on you.

. Oh and everyone gets 100% mana during the taunt.

This guarantees you that you can fire the nearby heroes 3 times without the need of charging mana outside what Ludwig gives.
So 100% mana in total gained so that you can fire your heroes in the 3rd turn, 5th turn, and the 6th turn.

That make sense if diamonds was 10 times cheaper !

I remember when I was writing that Black Knight being Barbarian makes no sense and people were replying that making him a paladin he’d be for sure overpowered and broken.

Let’s hope they are punking us and they release these heroes significantly toned down.

Peoples with Onatel will be happy to face him, others won’t.