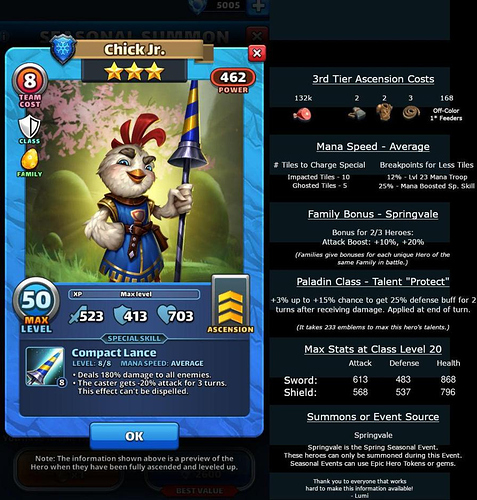 What do you think of Chick Jr.?

This thread is for thoughts and discussion on Chick Jr.

Based on preferences Forum members have expressed, please try to stick mainly to Chick Jr. and not wander off topic too much to other heroes.

*NOTE: Summon Results posted without any commentary/feedback at all should be flagged as Off Topic and removed, based on preferences expressed by the Forum community. Please include some comments about what you think of Chick Jr. when posting Summon Results. In addition to opinions about Chick Jr., you are also encouraged to include how many Summons it took before receiving Chick Jr. (or how many Summons you’ve done without receiving Chick Jr.), so other players are presented with realistic experiences of the rarity of Seasonal Event Heroes.

Is Chick Jr. worth Summoning For?

What do you think of Chick Jr. compared to other 3* Heroes?

How many copies of Chick Jr. is it worth keeping & levelling?

How does Chick Jr.'s Special Skill match his Base Stats?

What do you think Chick Jr.'s Primary Purpose is?

Is Chick Jr. worth giving Paladin Emblems to?

Where do you think Chick Jr. is best suited on defence (in a 3* arena)?

How do you think Chick Jr. will be best used?

I like the look of Chick Jr. but I’m kind of sceptical if it’s worth ascending him. Might be good together with Nordri. But don’t have him (yet).

He reminds me of Scrappy Doo from the Scooby Doo cartoons. No battle is too big for this little fella.

He is the only one of the new family members that I actually want. He would sit very nicely in my 3 star blue stack …

3* blue stack of karil ulmer nordri by any chance?

“He is delicious” - Frida said.

20 Cats (strange that his name is Gato (cat in Spanish and Portuguese) but is a lizard).

Stacking him with Nordri, Gato and Costumed Gunnar

Gotta be Gato to block that debuff, surely?

I honestly just pulled that combo outta my a**

It was just a light guess…

All i know about 3*:
Tank bane
Dont wing oberon
Belithe is better than hawkmoon
Use brienne on titans

LOL, i didn’t know you didn’t know I thought you we’re just sharing your combo you made or would make with him, and I was telling you what I’m going to do with mine lol @Rigs

Belith is better than Hawkmoon? Not with costume she isn’t. But this is about chicken jr.

In any case, with Chick for offense, you want to use Gato for the status block (so Chick doesn’t drop his attack after using the skill) and you’ll want Nordri and Druid Gunnar (or Ulmer) for that defense drop.

Chick is an insane 3* hero too – his damage is significantly better than all the 3*s who hit all enemies.

Last time I calculated it his damage was even better than Santa’s – and yes, Santa’s role isn’t to deal damage, but putting that on a 3* hero is nuts.

Welcome to the forum

I think he only got 1 advantage…mana speed average for hitting all. That’s it. Said this I really don’t need him.

Said this I really don’t need him.

But will I level him? When there’s nothing more interesting to plow blue feeders into, sure!

Ok just reading through this, and it did make me chuckle. But Just to clarify, I wanted the Chick JR to add to my blue stack team of Gato, Gato (2), Nordi and Gunnar costume.
But I didn’t get him so no idea which other 3 star blue to put in there - and I have all of them including Ulmer and Karil lol