This thread is for discussing strategy related to Costumed Master Lepus, as well as your thoughts on him. 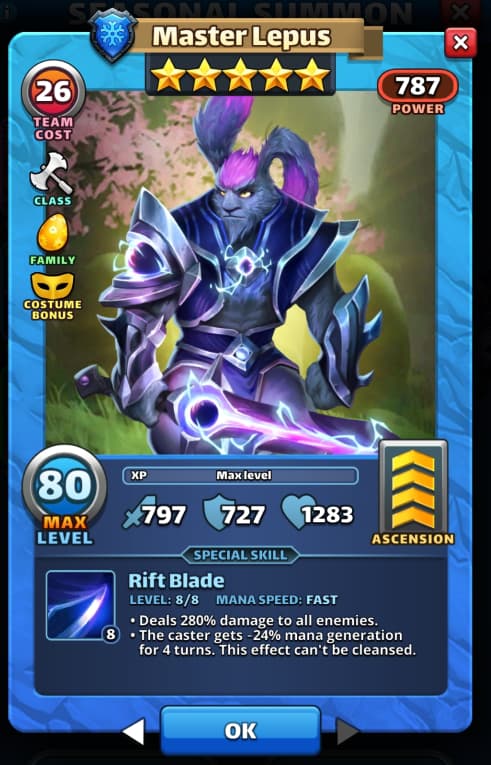 Heroes become stronger when teamed other unique Heroes of the same family.

This thread is for thoughts and discussion on Costumed Master Lepus.

What do you think of Costumed Master Lepus ?

This thread is for thoughts and discussion on Costumed Master Lepus.

Based on preferences Forum members have expressed, please try to stick mainly to Costumed Master Lepus and not wander off topic too much to other heroes.

Is Costumed Master Lepus worth Summoning For?

How many copies of Costumed Master Lepus would be useful to keep & Level?

What do you think of Costumed Master Lepus compared to other Heroes?

What do you think which version of Master Lepus is better ?

Is Costumed Master Lepus worth giving Druid Emblems to the original hero?

In Defence, where do you think Costumed Master Lepus is best used?

How do you think Costumed Master Lepus is best used?

He will hit almost as strong as Killhare, I really want to get him, mana debuff doesn’t matter if I use him with c.Kiril and Morel.

I don’t care for the Easter teams… The costumed versions don’t change my mind on that at all.

Or one of Debuff protectors, all of whom are faster (Emilio, Garnet, Grazul, Vanda). I definitely want him as well. Especially since I’ve seen his costume and it looks rad.

After months of 5* drought

Got lucky, I just finished LBing base Lepus and now I got his costume 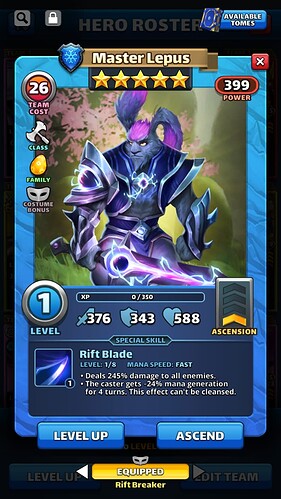 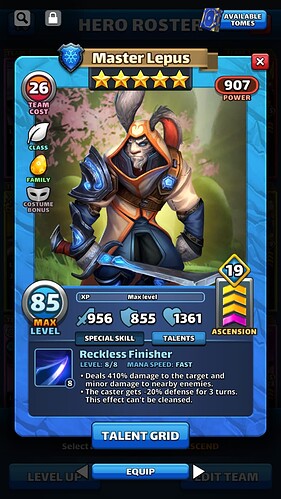 I mean…shxt… that artwork!!! TBH, I was looking to get only Killhare, but that artwork is insane.

While I don’t think it overwrites, it may not be replaced when Elizabeth’s applies her mana slow

negative mana gen for 4 turn is too long

He and Chameleon will be best friends. Although Lepus won’t get Chameleon’s attack buff, because Chameleon’s special will cleanse the uncleansable.

Ahh…right. I stand corrected. He cleanses the enemies’ status effects. Thank you for the correction.

What is that game ?

Didn’t think about gazelle and I have her. She is most welcomed because 4 turns speed penalty on a 280% damage hero is just inexcusable imo
Although his initial hit is faster than heroes like lewena who basically is a pure damage hitter