This thread is for discussing strategy related to Costumed Jack O’Hare, as well as your thoughts on him. 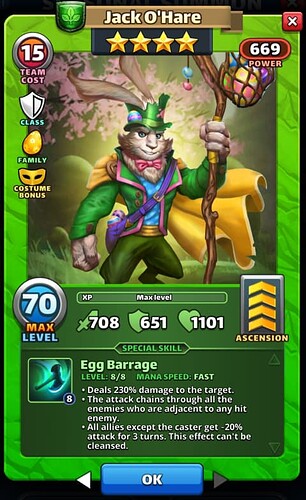 There appear to be no changes to Costumed Jack O’Hare from last-seen Beta stats, skill, and design.

What do you think of Costumed Jack O’Hare ?

This thread is for thoughts and discussion on Costumed Jack O’Hare.

Based on preferences Forum members have expressed, please try to stick mainly to Costumed Jack O’Hare and not wander off topic too much to other heroes.

Is Costumed Jack O’Hare worth Summoning For?

How many copies of Costumed Jack O’Hare would be useful to keep & Level?

What do you think of Costumed Jack O’Hare compared to other Heroes?

How does Costumed Jack O’Hare’s Special Skill and Intended Purpose match his Base Stats?

What do you think which version of Jack O’Hare is better ?

Is Costumed Jack O’Hare worth giving Ranger Emblems to the original hero?

In Defence, where do you think Costumed Jack O’Hare is best used?

How do you think Costumed Jack O’Hare is best used?

As much as people seem to despise the “chain” attacks, I think in Jacks case it won’t be as bad since he can fire fast and is thus more likely to actually chain 5 enemies multiple times in a battle before the chain becomes less effective.

Obviously if I pull him I won’t use him on Defense, but I will use him in a number of other places.

Problem is with the defense down to everyone else, he has to fire last. If the other heroes have killed and enemy, he’s not chaining them all. I don’t like the build of this one.

Fair point, the ailment to all reduces their effectiveness if he fires. Maybe run him on a healer heavy team? Not sure really.

I keep forgetting about the outdated mechanics of Springvale heroes

I’m just pretty meh about this one altogether. The new special is a copy over of a different hero in the event as opposed to making him diverse and interesting.

I have the original and have zero desire to get the costume. Sure the costume is better for a damage standpoint, but not so much so it is enticing me to throw saved EHTs at the portal for it.

For some of the new costumes I’d have preferred a difference in type of skill in same way Caedmon/Sonya giving either debuff or cleanse depending on version made getting the costume useful for smaller rosters so there is the choice without taking up an extra roster spot. If they’d made Jack’s costume something like a field medic or given it a debuff or cleanse, I would have been interested. This just bores me

The connection between chaining attack and attack down to all allies is very unfortunate. If he is used in green stack, firing his allies before him can accidentally kill an enemy, which will break chain, firing him first will decrease attack of allies.
You have to be very careful using him.

This costume is good for increasing regular Jack’s stats a bit. I see no other real use for it.

He went from a “I KILL ALL OF YOU!!” to shooting single soda cans off of a fence.

Even for me who mains jack hare for a very long time, this costume is just terrible. You get this costume for the costume bonus for regular jack hare

I wish they gave Springvale heroes more complex detrimental ailments instead of the bare minimum. Attack to all is truly a detriment because there is no way to turn attack down into an advantage unlike defence down.
Here is an example of how I would costume jack hare

Why taunt? It draws damage to him with no defensive support, which means he will die very easily. That should be enough of a detriment, with some offhand strategies when using him
Also it’s an offense taunter, something never heard of because taunters are mostly defensive oriented
Also 4 stars have no taunters yet, so why don’t we introduce taunt to the 4 star pool?

I don’t understand the polls.

I just pulled him and was quite underwhelmed. -20% attack for all allies?
He basically does the same thing as Wren, right? Or am I missunderstanding this costume?

The polls show more support for the customed hero and have 70% of people saying “he is absolutely worth summoning for”. Surely only for the custome bonus to the normal hero?

What am I not getting?

A large part of my reasoning comes from the drawback of -20% attack, maybe if it was -20% attack for him I would consider it. Definitely doesn’t make my team and I would rather have Wren

Wouldn’t firing off someone like Kiril after these Spring heroes fire reverse the detrimental attack/defense downs?

It’s uncleansable. It can only be blocked with ailment shielders

At first (earlier in the thread) I thought Costume Jack would be good but I had overlooked the ailment to all. As it is I now think Costume version is terrible, and will instead be running him in non-costumed form. I think with the boost to stats, his vanilla form is actually a pretty decent hero.

I just pulled him and just for fun I want to see if there is any hero who can turn his negative side-effect into something useful. The only hero I have and tested is Chakkoszrot that his passive of +24% mana generation got triggered. Are there any other heroes like that?