This thread is for discussing strategy related to Costumed Killhare, as well as your thoughts on him. 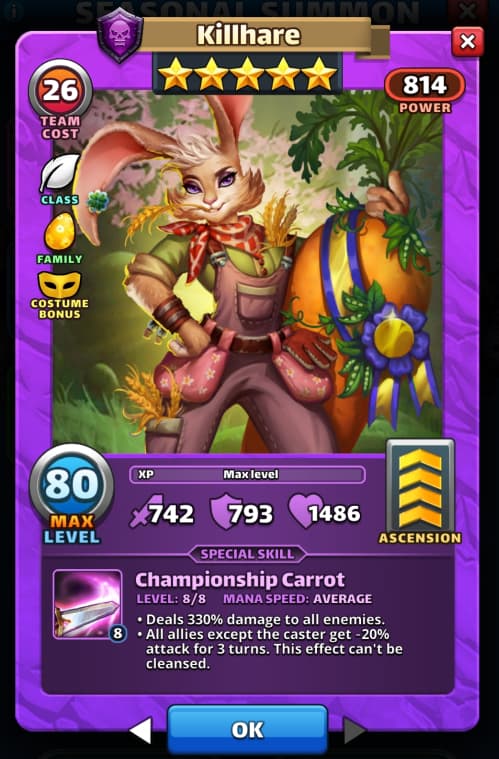 Heroes become stronger when teamed other unique Heroes of the same family.

There appear to be no changes to Costumed Killhare from last-seen Beta stats, skill, and design.

What do you think of Costumed Killhare ?

This thread is for thoughts and discussion on Costumed Killhare.

Based on preferences Forum members have expressed, please try to stick mainly to Costumed Killhare and not wander off topic too much to other heroes.

Is Costumed Killhare worth Summoning For?

How many copies of Costumed Killhare would be useful to keep & Level?

What do you think of Costumed Killhare compared to other Heroes?

What do you think which version of Killhare is better ?

Is Costumed Killhare worth giving Fighter Emblems to the original hero?

In Defence, where do you think Costumed Killhare is best used?

How do you think Costumed Killhare is best used?

Not 100% sure im sold on this one. JF can counter Killhare’s defense down and give a defense up, but, a bit more defense and hits a tad harder, for lower attack for everyone else? Not sure attack down is a good trade off, unless we have a special skill that turns attack down into an attack up. She seems more of an offensive hero rather than a defensive one in this case. Just my early thoughts on it.

She’ll pair well with c.Rigard’s +48% attack at a minimum.

Unfortunately, Costume Killhare overwrites Costume Rigard’s +48% attack and cannot be cleansed. So, if we have the Attack up version of JF’s skill, that attack down, cannot be overwritten, if i remember correctly.

Or two Zagrog and two Frida!

So what are the list of heroes that can resist negative attack made by killhare?

I would have assumed by reading that c.rigard just couldn’t cleanse the status ailment from allies

Yea, only ailment blockers can help.

With the regular one at least there is some synergies with certain heroes. Like JF and also any riposter who can increase their counterattack with KH’s defence down. But the costume has no proper synergy. It’s either you use ailment shields or a full attrition team as those heroes don’t use attack. She can only be used with 2 other springvale heroes to offset the attack down with their family bonus

I prefer the regular version!
I had high hopes for the costume version!
Grazul will help preventing that -%attack

If I manage to snag her, my Grazul will finally see some action.

I am not even sure if C-Killhare hits that harder that just Killhare with C-Bonus. C-Killhare has just an Atk point above regular Killhare, so Killhare with C-bonus will have higher attack, making it less of a difference. The attack reduction may be a problem, though it still can be guarded against by Vanda, Emilio, Garnet or Grazul. Most importantly, Fighter class is imho better than Druid, so regular Killhare is probably better option. And if used as tank that Def down won’t matter as much.

Got her ! I’ve Garnet and Nemo. She can block the ailment. On the other side Captain Nemo will profit from the ailment. What a dilemma ! 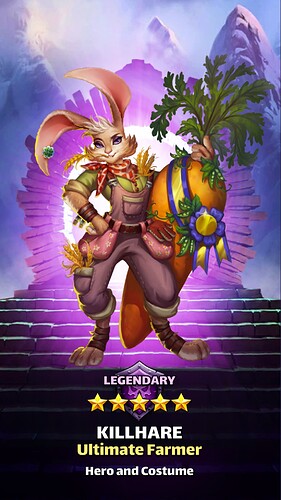 Only the regular one for nemo. The costumed one would just drop attack and hinder nemo’s damage

Last one of my 27 EHTs. Getting one EHT at starfall mattered. No zagrog though and certainly no silvaria for me cause I am done with this portal

Just pulled her, worth stripping emblems off panther for her?

Got the purple lady on my 4th pull, very happy to have an purple 5* to work on. Besides Roostley I have all Springvale heroes so no more pulls for me at this portal. Used up my luck as well

worth stripping emblems off panther for her?