This thread is for information and discussion on the Return to Morlovia (Halloween) 2021 Summon Portal, and sharing Summon Results. 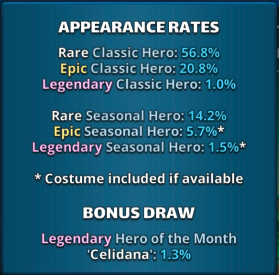 Epic Hero Tokens Can Be Used for Seasonal Summoning

Because of that, unlike Challenge Event Summons, the Summoning Portal for Seasonal Events allows using saved up Epic Hero Tokens that can otherwise normally only be used for Epic Hero Summons.

That makes Seasonal Events the only place you can currently use Epic Hero Tokens for a chance at non-Season 1 heroes.

You’ll also have the same chance at the HOTM as usual when using Epic Hero Tokens.

Please note that NO occurrence is ever actually 100%; the 100% entries in the table below indicate cumulative probabilities sufficiently close to 100% that they are expressed as such for simplicity. All other numbers are rounded to the nearest 0.1%.

Putting That in Perspective

Other 2022 Return to Morlovia Threads

Just curious, will all the 5* be featured or otherwise what’s the odds of pulling a non-featured 5* such as Francine, Victor etc. I know last year it was different as there were only 3 legendaries but now there are 6? Will the 1.6% odds be broken up?

Btw it’s weird this starts Tuesday. Except X-mas event, which always started 1st December, all other events always started on Monday for like last two years. Not that it particularly matters, just an observation.

It starts on Monday 3pm, my time. 3 October is Monday.

You sure? SGG Calendar shows it starts 4th October (Tuesday) and so does this:

Nooooooo…, the calendar was changed ? From the earlier info release.

Never mind, Tuesday it is then.

Hmmm, probably a typo on SGG’s side. The data I have clearly indicates that it should start on the 3rd Oct, until the 14th Nov.
@PlayForFun be ready to edit all your Return to Morlovia-related threads tomorrow

Ok because honestly it makes no sense. It’s not like this even would be over during Halloween if it started tomorrow. Though it is also marked so in calendar (though that is probably auto-generated from those dates). We’ll see.

Edit: Tis’ says it should start tomorrow. Take your pick since we have two different dates from official source.

3rd Oct all the way!

Yay! Ill be picking Alurcard and Miriam and Midnight in 30 pulls tomorrow then, not tuesday

I summoned with 26 EHTs and have 2 Goopys and a C Frank to show for it. the rest were mostly S1 3s and a few 4s, plus a dupe Vlad

ANABELL
the 3*green one
Valeria

A bit disappointed Valeria did not get a costume. Was hoping for Jack.

I’m glad to finally get my first Frank.