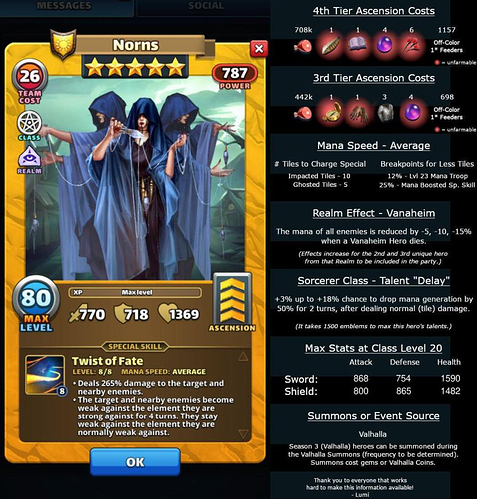 There appear to be no changes to Norns from the last-seen Beta stats, skill, and design.

Direct damage for The Hatter, Sargasso, Norns and Khagan has been increased to be better aligned with damage amounts of other special skills doing damage to similar targets

What do you think of Norns?

This thread is for thoughts and discussion on Norns.

Based on preferences Forum members have expressed, please try to stick mainly to Norns and not wander off topic too much to other heroes.

*NOTE: Summon Results posted without any commentary/feedback at all should be flagged as Off Topic and removed, based on preferences expressed by the Forum community. Please include some comments about what you think of Norns when posting Summon Results. In addition to opinions about Norns, you are also encouraged to include how many Summons it took before receiving Norns (or how many Summons you’ve done without receiving Norns), so other players are presented with realistic experiences of the rarity of Season 3 Heroes.

24 posts were split to a new topic: Sorry I stuffed the poll

Sorry everyone I muffed the poll up… Forgot to edit the “what do you think she’s best used as” question.

Is Norns worth Summoning For?

How many copies of Norns would be useful to keep & Level?

What do you think Norns’ Primary Purpose is?

What do you think of Norns compared to other Heroes?

How does Norns’ Special Skill and Intended Purpose match her/their Base Stats?

Is Norns worth giving Sorcerer Emblems to?

In Defence, where do you think Norns is best used?

How do you think Norns is best used?

still don’t have 5* yellow… so Norns worth for me. Joon always avoid me… hahaha

I swear I dated her in college …

Seems to me like the most useless hero since Margaret.

Against titans : useless, except for yellow tile damage. Who’s gonna go mono yellow against a yellow titan and pray for yellow tiles while her 4 turns effect is on?

Mono raid : useless 90% of the time. By the time your special is ready you’re out of yellow tiles, and then you got to pray you line up yellow tiles right against that yellow flank. Will happen once every full moon.

She would have to make the ennemies weak against both tiles AND special skills to start to be interesting, or her special effect would have to last 6 turns.

The niche presumably would be to break defences with dark tanks and two holy flanks - wipe the tank with tiles, fire, now you can unleash on the flanks.
Something like the horrible defence @Ender_BattleSchool had with BW tank and 3-2 layout (which I rerolled many times, no thanks!!)

In practice, she’s probably only useful if only a small number of players have her maxed - if/when there’s a lot of her, that kind of defence would surely become less common.

I certainly have no intention of pulling hard for her.

And sorcerers are rare so I have plenty of emblems

Thing is, to unleash against flanks you will need yellow tiles, (since her special doesn’t affect special skill damage) even after charging her average speed special. If you still have yellow tiles on the boards ready after charging her, it means you have such and awesome board you would have won anyhow with just about any yellow hero combo

Unless you go 3-2 yellow-purple against @Ender_BattleSchool style defense, and hope to charge her before the tank, and then all ennemies become weak against both yellow and purple tiles.

This would also be a tactic against that kind of defence…

Maybe Ender’s defence is so nasty the dev’s created a hero to counter him personally?

Even then. If at least she dispelled like Frida. She really is missing something, damage below average compared to other hero that hit 3 needs something way better as a side effect than this tile damage inversion thats super circumstantial and luck tied.

Seems to me like the most useless hero since Margaret.

Hey, that is not fair to Maregret. Geez, did I really say that?

Remember that the weak/strong color relationship only applies to normal damage (i.e. tile damage). I have a feeling she is meant for some weird purple/yellow titan team where you want to have a yellow / purple titan take maximum tile damage from both yellow and purple attackers. The weak/strong relationship does not carry over to SS damage.

What team could possibly make that worthwhile? Maybe a Gazelle based team going up against a yellow titan.

Outside of this niche use I can’t think of any practical way to exploit Norns ability. i put her into my rainbow auto-farming healer team to see if the weak/strong relationship could be exploited in auto-farming but I saw no significant improvement.

It’s only 5% less than Drake and we all agree he’s excellent and don’t generally complain that damage is too low…
Her attack stat at +0 is getting on for 50 higher, too, so that shrinks things.

Then again, he’s fast and blind is useful everywhere.
And actually deep down I do agree something isn’t quite there… Or at least, not for me to be desperately trying to pull and then prioritize!

What I mean by this is that we see hero’s coming out that are different and in some cases pretty niche… And they rule when used to their full potential (which may not be easy to extract) but may not always be overly special otherwise.
For example - Freya is amazing in a minion team (especially if you have PiBs to pop them all out at fast too!), but unless you already have that she’s pretty unspectacular…

In other words, hero’s that you’d ascend to fill their niches when you already have a deep and strong bench already… But not necessarily before earlier hero’s if you don’t yet have the ability to max a luxury/niche hero.

(The same goes for Grimble for example - he’s great at minion eating, but it’s definitely a niche and you wouldn’t ascend him first - and unless the meta changes maybe not even 4th or 5th dark!).

Her (their?) design is imho incredibly creepy. Otherwise I don’t know what to think of her. She might be useful in wars when you don’t have enough colors to stack against opponents, but otherwise it’s easier to do just that.

I was just thinking that… There’s potential in single colour tank wars, but it’s debatable how much so at average mana - if she was vfast with 100% damage maybe we’d see more interest?

Is she good for anything or jusr keep in roster

A post was merged into an existing topic: In Game Translations for Foreign Languages - Please add your suggestions