🐼 Diaochan – 5* Dark / Purple from War of the Three Kingdoms

New War of the Three Kingdoms hero is released: Diaochan

This thread is for discussing strategy related to Diaochan, as well as your thoughts on him. 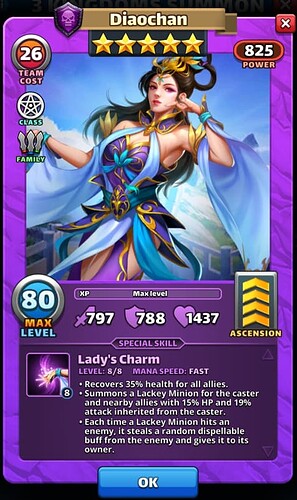 There appear to be no changes to Diaochan from last-seen Beta stats, skill, and design.

What do you think of Diaochan ?

This thread is for thoughts and discussion on Diaochan.

Based on preferences Forum members have expressed, please try to stick mainly to Diaochan and not wander off topic too much to other heroes.

*NOTE: Summon Results posted without any commentary/feedback at all should be flagged as Off Topic and removed, based on preferences expressed by the Forum community. Please include some comments about what you think of Diaochan when posting Summon Results. In addition to opinions about Diaochan, you are also encouraged to include how many Summons it took before receiving Diaochan (or how many Summons you’ve done without receiving Diaochan), so other players are presented with realistic experiences of the rarity of Legendary Event Hero.

Is Diaochan worth Summoning For?

How many copies of Diaochan would be useful to keep & Level?

What do you think Diaochan’s Primary Purpose is?

What do you think of Diaochan compared to other Heroes?

How does Diaochan’s Special Skill and Intended Purpose match Diaochan’s Base Stats?

Is Diaochan worth giving Sorcerer Emblems to?

In Defence, where do you think Diaochan is best used?

How do you think Diaochan is best used?

Could be a decent counter to Ludwig

This one is gone be mine first 10 pulls guaranteed.

The most coveted one in this portal. This hero is going to shift the buff heavy defence meta overnight

Not just against Ludwig, but against any OP buffers out there. C kad is completely helpless against her

This is the one I want the most…for sure.

C kad is completely helpless against her

There needs to be a test to see this actually. Because my understanding from this is the buff steal is from the minion, not from a special skill. So it can bypass the rules of these buffs like taunt and dodge.
My guess is that the minion is whatever element of the owner.
If it’s like what you mentioned, then it would be quite disappointing
And it’s actually not the end of the world even if c kad can dodge the buff steal. You’re deliberately forcing her to produce minions, and how many times can she dodge those attacks? If you have anti minion heroes, you can just profit from this

you forgot a few zeros!

Wow… I would love this one!

the art is fabulous…sexy, fearless and still strong. congratulations to all who manage to get her!

Where can I find the images, I’m lost? Thank you!

Thank you, didn’t realize they were in that sneak peek banner!

No, Wang Yumanji (4 star hero) is on the poster.

And I just realised she’s a sorcerer. Man, so many good sorcerers now. Time to reset zuri if I get her

Thanks …still love the artwork

Managed to pull her, so…. Recommendations on who would you limit break Lu Bu, Diaochan or Xnolphod??