New War of the Three Kingdoms hero is released: Li

This thread is for discussing strategy related to Li, as well as your thoughts on him. 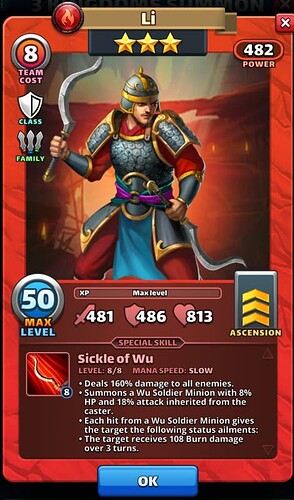 There appear to be no changes to Li from last-seen Beta stats, skill, and design.

What do you think of Li ?

This thread is for thoughts and discussion on Li.

Based on preferences Forum members have expressed, please try to stick mainly to Li and not wander off topic too much to other heroes.

*NOTE: Summon Results posted without any commentary/feedback at all should be flagged as Off Topic and removed, based on preferences expressed by the Forum community. Please include some comments about what you think of Li when posting Summon Results. In addition to opinions about Li, you are also encouraged to include how many Summons it took before receiving Li (or how many Summons you’ve done without receiving Li), so other players are presented with realistic experiences of the rarity of Rare Event Hero.

Is Li worth Summoning For?

What do you think of Li compared to other 3* Heroes?

How many copies of Li is it worth keeping & levelling?

How does Li’s Special Skill match Li’s Base Stats?

What do you think Li’s Primary Purpose is?

Is Li worth giving Paladin Emblems to?

Where do you think Li is best suited on defence (in a 3* arena)?

How do you think Li will be best used?

Hopefully, this one will be less disappointing than Vollermork. Should be fun for rush and bloody tournaments.

Jahangir with random burn DOT in a nutshell

I compared Li to other slow reds.

Jahangir with random burn DOT in a nutshell

This was the first comparison I made too. Jahangir has a higher base attack state, doesn’t have a minion, and can get down to 6 tiles in rush format. All of those have situational benefits. But a long lasting minion continually applying burn is pretty nice too.

I’m not sure if I’ll use Li for challenge events. The minion is a negative. I could go for a Jahangir for better tile damage. Or Surdri for a higher “max damage”.

I don’t use Jahangir and Surdri in non rush format, so I wouldn’t use Li either. In rush, the area I see Li being better is against a defensive team without a healer. Sometimes I go healer heavy and whittle them down over time. This is where Li can outperform his counterparts by bringing the “extra health” via minion. With Treevil being so prevelant, I don’t use this strategy as much anymore.

So I’m not sure where I would use Li as I have CB.Jahangir and Sudri. Li is my least favorite of the three new rare heroes.

I think he’s going to be like what kvasir would be. The soldier minions can be used as meatshields. But he’s probably only great for rush

The thread title is wrong. He’s a Fire/Red hero

Thanks for the breakdown @Ruskin505

As the sneakerheads would say… “Got 'em.”

he give minions just to him, need to be fixed info, is it me or he is one of worst 3*,seems dawa is better,

True, I have fixed the OP.

But sadly not the thread title… So many new heroes, so many details, I don’t envy you! Please regard the community’s proof reading as an attempt to help rather than criticise.

The title is fixed now too

The OP now refects the May balance updates.

Now the June balance updates are also added to the OP.

is he any good? im planning to level him and use in rush tourney