🐼 Sun Shangxiang – 4* Fire / Red from War of the Three Kingdoms

This thread is for discussing strategy related to Sun Shangxiang, as well as your thoughts on him. 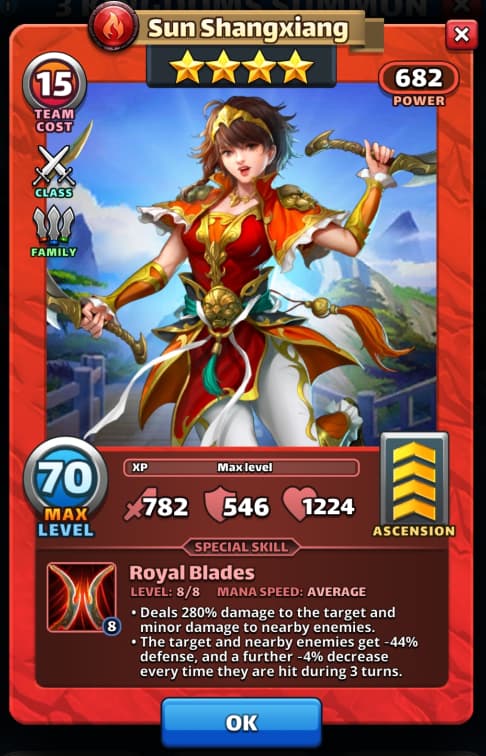 There appear to be no changes to Sun Shangxiang from last-seen Beta stats, skill, and design.

What do you think of Sun Shangxiang ?

This thread is for thoughts and discussion on Sun Shangxiang.

Based on preferences Forum members have expressed, please try to stick mainly to Sun Shangxiang and not wander off topic too much to other heroes.

Is Sun Shangxiang worth Summoning For?

How many copies of Sun Shangxiang would be useful to keep & Level?

What do you think Sun Shangxiang’s Primary Purpose is?

What do you think of Sun Shangxiang compared to other Heroes?

How does Sun Shangxiang’s Special Skill and Intended Purpose match his Base Stats?

Is Sun Shangxiang worth giving Fighter Emblems to?

In Defence, where do you think Sun Shangxiang is best used?

How do you think Sun Shangxiang is best used?

That is one broken defense stat. Average speed and a very fragile glass cannon. Will probably die before charging

I hope I can get her.

Me wanna. Even though def is on low side, so embleming is required. 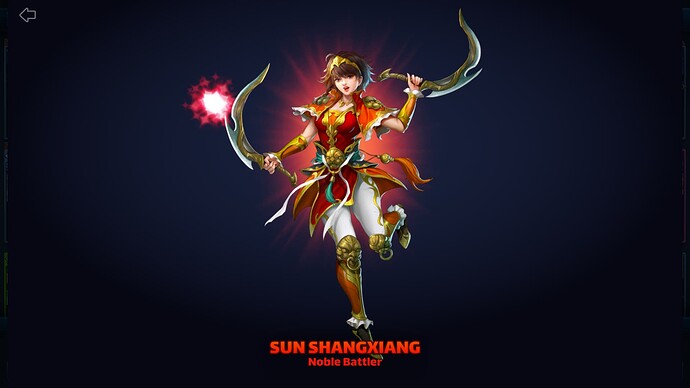 I’m curious about what the max defense reduction is if anyone can test.

Thanks, I had forgotten. So many heroes, it is hard to remember sometimes.

I think i saw your touches on this beauty also …

Got her, but I doubt that I will max her very soon. I prioritize maxing heroes for war and her defense is just too low for the enemies I face

I am curious if we are going to see this lady on challenge event teams. The defense down she can potentially get is bigger than (c)Santa or Wilbur. You still need to bring Wilbur for the shared damage so I’m not sure if slotting out Scarlett for epic or cColen for legendary for her is justified. What do you guys think?

Not the most important point ever made but these heroes were definitely designed by the same artist who did Clash of Knights, right? Shangxiang looks so much like Wren to me and I love the level of detail in both portals’ design!

She’s going to be a monster against titans. Want!

To answer your question yes and no

For this set of pictures from a year ago, my favorite is Sun Shangxiang (image design). After seeing that she is a four-star hero, I hope I can summon her then.
The most dissatisfied ones are Zhuge Liang, Zhou Yu, and Lu Bu, because the hands were full at that time, these three photos were taken away by others, and the overall styl

I believe somewhere in the forum I read that @BaiMingCG started some of the sketches and someone else finished them.

The Scarlett of 2022. She’ll destroy someone with ferant’s riposte

Yes, I did
The previous account can’t be used. I got a new one

She is a glass cannon but I am trying to emblem her along the Defense path, wherever the Defense Node is I go. Currently at 13 emblems, will have her done tomorrow or the next day.

So far I really like her, as said by others she is the 4* Athena. Also great art too @Bai_Ming