🐼 Jing – 3* Nature/ Green from War of the Three Kingdoms

New War of the Three Kingdoms hero is released: Jing

This thread is for discussing strategy related to Jing, as well as your thoughts on him. 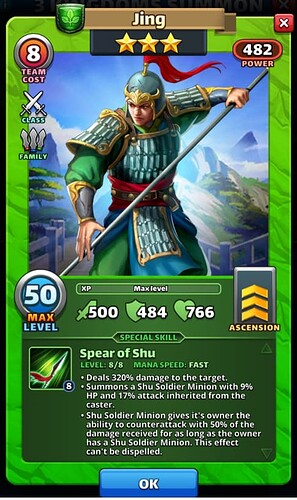 There appear to be no changes to Jing from last-seen Beta stats, skill, and design.

What do you think of Jing ?

This thread is for thoughts and discussion on Jing.

Based on preferences Forum members have expressed, please try to stick mainly to Jing and not wander off topic too much to other heroes.

*NOTE: Summon Results posted without any commentary/feedback at all should be flagged as Off Topic and removed, based on preferences expressed by the Forum community. Please include some comments about what you think of Jing when posting Summon Results. In addition to opinions about Jing, you are also encouraged to include how many Summons it took before receiving Jing (or how many Summons you’ve done without receiving Jing), so other players are presented with realistic experiences of the rarity of Rare Event Hero.

Is Jing worth Summoning For?

What do you think of Jing compared to other 3* Heroes?

How many copies of Jing is it worth keeping & levelling?

How does Jing’s Special Skill match Jing’s Base Stats?

What do you think Jing’s Primary Purpose is?

Is Jing worth giving Fighter Emblems to?

Where do you think Jing is best suited on defence (in a 3* arena)?

How do you think Jing will be best used?

There are a few Rare Nature Fast Snipers out there. When it comes to tile and special damage Jing isn’t anything too special (yes he does have good def/HP stats). Jing brings a new mechanic, but that isn’t universally better than his peers. All of these heroes can have their uses.

I wouldn’t feel the need to chase Jing, but he would be nice to have.

Summons a Shu Soldier Minion with 9% HP and 17% attack inherited from the caster.

Shouldn’t it be “Summons a Shu Soldier […] FOR ALL ALLIES”? I don’t have Jing and don’t know the English version of the card, however, according to the German version all allies get a Minion, not only the caster.

If this is correct, Jing seems pretty powerful and stronger than the other green snipers.

I’ve used a 10 pull, never got any new hero’s, then another, 6 individual pulls, never received any of the new hero’s

As usually all season 1 rubbish.

Its about times, E&P, removed, all season 1 hero’s from, these, new events

Come on power’s that be do something helpfull, for a change.

He only summons minion for self, not all Allie’s

All 3 star heroes are summoning a minion just to the caster. 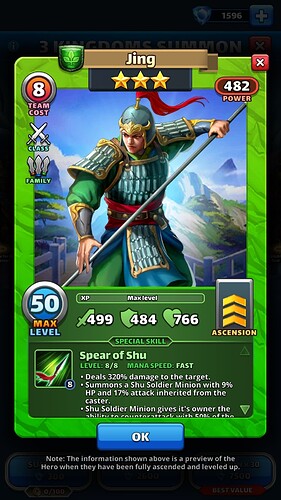 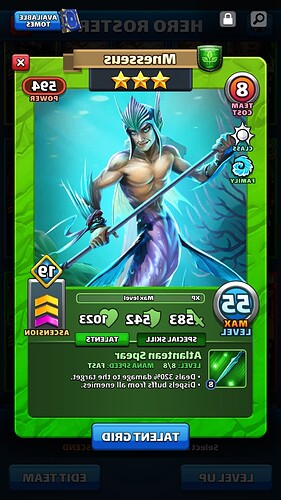 Both are 3* green, fast mana speed, deal equal 320% damage to 1 target and use spear as weapon. I am very sure he base on Mnesseus

Thanks for clarifying. Then the German translation for the green and blue 3* is wrong:

Actually, no. Frosty does it for all allies

I mean to write that it applies to all heroes of this current event .

If Jing is female, would she be the Mulan of Wo3K?

The OP is adjusted with May balance update.

The OP is adjusted further with the June balance updates.

Then my 3* Kvasir is special because he give minions to all… (:

Here I meant to write all 3 star heroes in the Kingdom family.
They are all summoning minions to only themselves.