This thread is to provide early insights and discussion on the Springvale costumes.

There are a total of 3 new Costumes being tested in v46 Beta 3 Testing Cycle.

NOTE: All numbers are presented INCLUDING the costume bonus.


NOTE: All numbers are presented INCLUDING the costume bonus.

Here we have difference costume bonus than the Summer Event Heroes.

The costumes are retaining their family bonus.
The normal and the costume version of a hero is counted as two unique heroes. 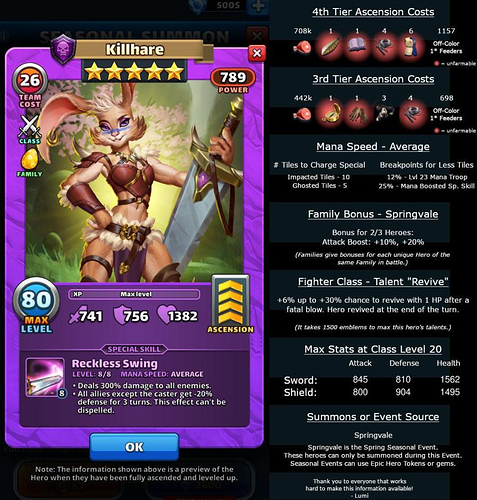 Exactly the same as the Hero, but every single stat better, 30% more special attack.
The only real change is the class, with druid being worse than fighter.

I mean the best costumes are those were both versions (base hero and costume) have value and you can face situations were both are useful.
Here I can’t really see that. The costumed version is just the same only better. Maybe on defense a few value fighter class more than better stats, but I can’t see me ever using the normal bunny again if I get the costume.

previous version of both Lepus and Killhare costumes we had seen

Linky link: 🧪 Early Information on ROUND 4 Costumes [Part of The Beta Beat v36]

Would’ve liked an costume for the sheep as well, maybe with an nice twist in the healing part. Anyways I got all Springvale Heroes except for Killhare, having these costumes ain’t gonna change my mind at not pulling at this portal. Maybe if new heroes were introduced I would have considered it.

Yes, onlly Master Lepus was adjusted. Killhare left as she was.

And a 4 star costume is added.

I remember when these were announced the first time there was massive outcry about how OP they were. Now, after aggressive money grabs and power surge by $G, nobody is even batting an eyelid at these low effort, cash grab costumes. Says it all really

In fairness, much of that outcry was over the precedent of adding costumes to Non-Season 1 heroes…

In fairness, much of that outcry was over the precedent of adding costumes to Non-Season 1 heroes…

Costumes were introduced to “balance” S1 heroes. In other words, making us pay for their buffs. Because they didn’t want to balance older heroes.

The greed toke over the situation and non S1 costumes are now being released in the avalanche of heroes. Mostly of them OP.

Problems are already happening like C. Krampus, who for sure didn’t needed a costume for balance and gaming reasons, but got one because of the greed.

Everything kinda lost its reasons to exist in this game. If you make a small analysis you’ll notice that every update is somehow based on profit. Sometimes they’re way lazy like in this Springvale update. They don’t have anything new to offer in the event, no gameplay, no new offers, no new anything. Everything is costumes now - or pulls.

The game basically hasn’t got anything new to offer for ages but OP heroes and costumes so you can bully your enemies.

Some events here and there were added (circus, knights, slayers) but they’re a copy paste from older events and are just another part of the hero spam. W3K that’s coming now is bringing some “new” mechanics (I’ll try to don’t say it’s just an alliance wars rip off) but also will spam more heroes.

We can soon expect more and more costumes to the 1000 releases and older heroes will fall more behind and that’s so on.

Sadly there’s nothing good to be said. And I’m not lying.

Huh, good to see it’s not just me, with the costume for Killhare? Gonna stick to the base one either way!

Now the Master Lepis & Jack O’Hare ones in fact interest me more… great to see Lepis get a nice costume, power creep was creeping 9heh) up on him abit, glass canon still-hits-like-a-truck type that he is.

And the Jack costume! Nice! Good to see that, I’ve reason to try and emblem him again now.

I’m surprised that Sir Roostley didn’t get a costume, and that there’s no new hero.
Springvale completes the one-year cycle of seasonal events, where Sand empire has 2 costumes over 3 legendaries, morlovia 3/3, Christmas 3/4 with Pengi addes this year, and now springvale with 2/3. Idk if then it’s worth saving ett for next springvale or morlovia

I thought that the laziness in making the costumes finished at Ursena, where they just changed one bullet point, or Seshat, where they changed the order of the bullets…

Naaaaah, where you think, that something cannot get worse - then the SGG Prince Charming comes along in all of its glory.

Adding +30% of attack for Killhare.

These costumes basically continue my opinion of all non S1 costumes so far. Nice, but not so much of an upgrade over the original that it’s worth hugely chasing

Based on this I can easily choose Killhare in Soul Exchange as there is nothing really great in her costume.

Exactly the same as the Hero, but every single stat better, 30% more special attack.
The only real change is the class, with druid being worse than fighter.

I mean the best costumes are those were both versions (base hero and costume) have value and you can face situations were both are useful.

Beyond paying 2 times for the same hero, this is what I HATE about (especially) non-s1 costumes. It is boring and lazy.

Every costume now is a tweak of %, a class change, and increased stats. Hero is a healer - costume HOT or overheal. Hero is sniper - costume sniper. Hero is taunter - costume taunt. Hero is rezzer - costume rezzer.

Why not make it interesting? Give the players double summoning the heroes more variety?

If we have to have costumes for every hero, make them interesting! Think outside the box and give them what may be non-traditional abilities.

^nice to see this

I’ve always semi avoided Springvale as the heroes don’t excite me (namely their downsides). Jack might change that. But at this point, I already have 50 4 stars. Do I need another?

Yes if you are able to pull him that is, it’s not that you’re gonna get the costume for free

No love for Rostley? I feel like he deserves a costume as well. Also we should have gotten at least 1 new heroso every event has 4 like Christmas. We could use a Ram that is slow mana speed that heals and applies multiple ailments from fiends to the enemies then applies and non-dispellable ailment to its self that is a DOT.