Credit to @BarryWuzHere for laying the groundwork for this. He theorized (and then we jointly verified) that the number of ascension materials and crafting materials that you get as part of your loot for beating a level on the map follows the same N-1 / N / N+1 distribution model as recruit drops do.

Well, now I’ve taken it a step further, and have confirmed the following loot drop rules (where the numbers below represent the “N” in the distribution model noted above):

It is actually not province but Season-Province.
I took a look at Province 4 in Season 1 and it is true (for total number of ingredients / asc. mats)
Good job!

I don’t know how much this really helps in terms of where to go for best farming. I do think it might help break ties when you’re deciding between a couple of spots, so hopefully some of you find it useful that way.

Some random related thoughts to keep in mind when making farming choices:

It is actually not province but Season-Province.

Oh, and one last thing: I’ve never tracked any data for S1 provinces 1, 2 or 3. Hopefully nobody’s using those for anything other than stalling a level-up while waiting for a titan to spawn.

It’s so funny to me what gets engagement on this forum. This is by FAR the most important contribution I’ve made to the community in general (imo), and it doesn’t even have double digit likes. Meanwhile, my snarky replies to some random recruitment thread a couple weeks ago go through the roof.

I just updated the OP on this post to include all provinces released to date. Hope some of y’all find it useful!

Many thanks @Zartanis for putting this in a more presentable format! 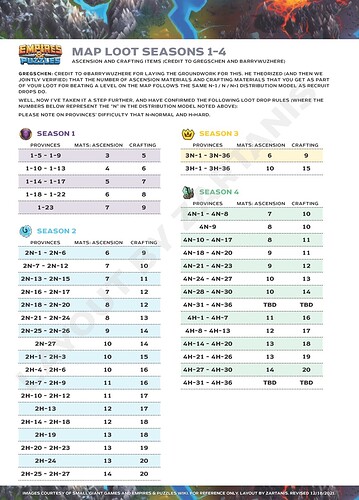 So as a next step in this awesome gathering of data do you it’s possible to break down a mats per WE?

I get AR, VF and whatever S4 becomes will become the most efficient but it’s interesting to which stages will be the best for mining in each of those and in the time inbetween them.

break down a mats per WE?

The original table did that

I could edit the table for you and add a per 1 WE column both ingredients, and ascension items

Edit
And I could add a Map Seasonal Monthly Event per WE column also ( MSME AKA AR, VF, UD, etc. )

It’s a pain with S1, since the WE cost changes in the middle of provinces. I can give a brief summary though:

I’ll note that S4-P8(H) is not far off, and is significantly better for ham farming… (although in general, I consider map farming for ham to be a fool’s errand, it can certainly be used as a good tie-breaker)

Is this also true for AR?

Just modify the WE by -3, and the #mats by 1.5. Although I don’t have the data for which way it gets rounded.

Thanks for putting in the work!