The Riddles of Wonderland Challenge Event is here! 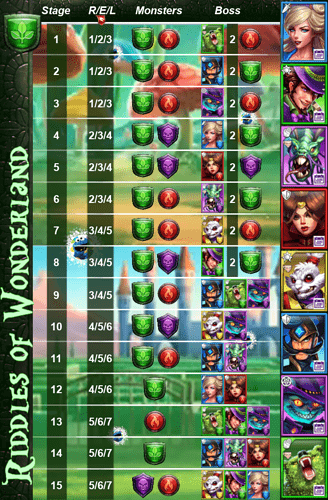 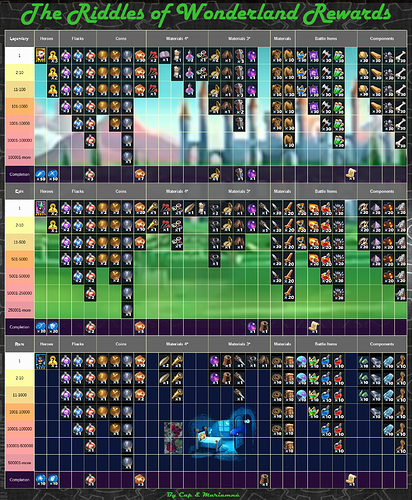 NOTE: Completion Rewards will be given even if the final stage is completed after the event ended, as long as it’s started before the event ends.

I highly recommend setting and sticking to a budget for Summoning to avoid overspending and frustration.

Please note that NO occurrence is ever actually 100%; the 100% entries in the table below indicate cumulative probabilities sufficiently close to 100% that they are expressed as such for simplicity. All other numbers are rounded to the nearest 0.1%.

Putting That In Perspective

Just to do the proofing thing, though I expect you’d get around to it in a bit, the Summoning Appearance Rates section needs updating from the last event. And what an important reminder to all that section is…

Always nice when people are excited enough for these threads that they read them before I’ve finished editing. I’ll update that part now.

Gonna go for an easy top 10,000, top 5000, top 1000 this time. Last month was a pretty big hit for my battle item and WE flask stocks. I hope to come out battle-item positive for this month.

To be fair, if I’d slowed down and noticed how recently you’d posted it, I’d have held off with the comment. Even you are not quite superhuman enough to do the whole thing instantaneously.

I’ll still go for Rare for Telescope #9, but I don’t really need Rings #20 from Epic 500 — especially with no 5* red on hand, and another set of Rings available in Path of Valor.

As for Legendary, I don’t really need Compass #28 nor Gloves #33 — so I’m not sure it’s worth extra Battle Items to get 3 EHT from there.

I might just go for Top 10000, which should be comparatively pretty easy.

Of course I’d love those Darts and Tonic from Legendary 100.

But I think it’d be too many Battle Items and too much work to get there.

On the plus side, reducing my targets should also let me farm Rare 3 a lot more, and set me up in great shape for future months.

On the plus side, reducing my targets should also let me farm Rare 3 a lot more, and set me up in great shape for future months.

Yeah, I was thinking the same, and hopefully get an extra pull or two’s worth of challenge coins in April/May/June (each) for a few extra pulls for Guardian Falcon… come on falcon!

I never completed Epic for Pirates, but have done for WOnderland. I think that’s due to having a stronger team now, but I did struggle at the bosses. I had to do it about 3 or 4 times . I got them down to no health and they’d destroy me. They would seem to target my Proteus first and kill him in one shot.

I struggled to do the final Bosses previously, so lets see how much better I can do this time and how many attempts. As always, I won’t be attempting leaderboard scores. I will redo any stages I know I can do better on. Otherwise first run through’s for me will be perfectly fine for the completion rewards.

I will most likely go for defensive on the bosses for this on Legendary, I am already thinking (I know purple monsters are on some stages but that’s fine):

Edit:
I pulled Alice + Chesire Cat last time, so lets see what I can get this time. I never had a Shrubber, I know he was always a desired one as a tank for 3* tourneys, right? My Alice is still untouched to this day haha.

I have a White Rabbit, but I would love to pull Alice or Jabber. They are two great heroes with fast mana and devastating hit. Not to mention about her beautiful dress…

What is everyone’s preferred colour choices for Wonderland?
I would assume Red… and… ?? Yellow?
I see from the graphics they vary a little. I have been working on 3* heroes to increase my 3* bench for events.

Just wondering where to focus my feeders for the next few days?
I have my Rudolph finally almost at max, he is one most use in these rare events right? I have never used him.

If you’re just going for completion, just do a rainbow team (obviously without green). Doesn’t really matter what you’re using.

I got Cheshire Cat last time and he’s been very useful for war clean ups.

I know the last time this event was on I was not even at the standard to beat the Rare tier but as I managed Pirates for the first time last month, I’m hopeful I can do so again here - hopefully without quite so many attempts.

I’m C2P on a strict monthly budget so I will only be able to draw as and when I earn the coins (and am currently on zero) so I’m not raising my hopes. Plenty of heroes to level atm though so I’m not going to focus mostly on beating the levels and earning a few useful items.

Rudolf is very useful. I put him into these events quite regularly. I don’t tend to stick to one team during these events. I usually keep an eye on the list of enemies and switch heroes in and out depending on what I’m facing.

My budget excludes POV so I won’t get most of that (just 100 gems at some point) I have to keep reminding myself that I really do have more than enough heroes to level up currently (except yellow. Keep hoping … )

Hello guys. I have included HP in my version. 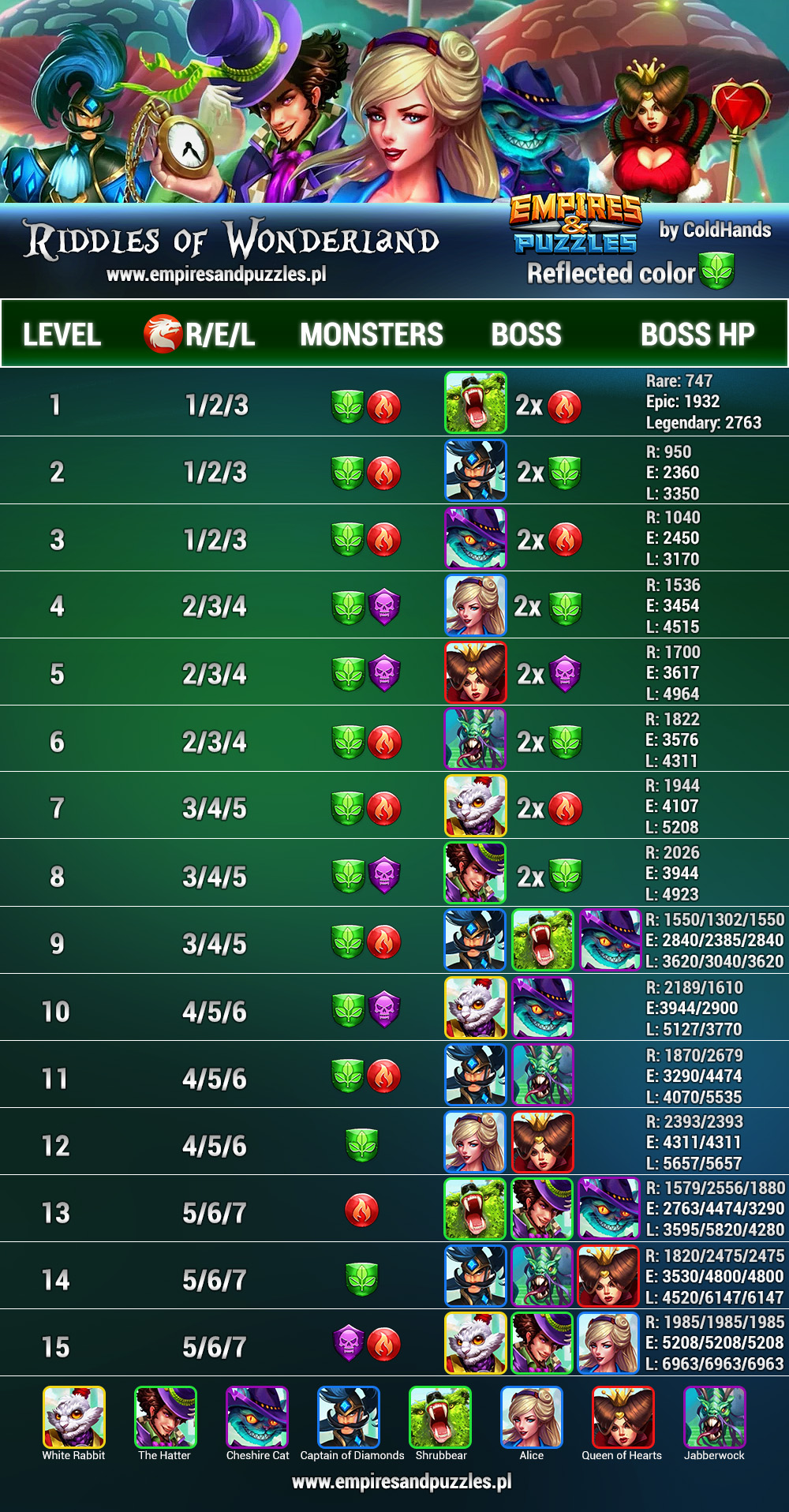 thanks! I’m more concerned with mob hp though, because knowing mob hp helps in deciding which items and how many to use on which stages.

Here is hoping I can get Shrubbear on my main. I only have him on my 2nd alt and he has been my tank ever since. I also want to get Gretel on my main too since I have Hansel already and I would like to complete the pair. I will be super shocked if I get Boss Wolf on a pull.

I want to try Sif in Legendary. She’ll be fully ascended with some feeder farming from Rare 3. In rare I will definitely try Kvasir then laugh about Queen of Hearts how she cannot summon that card of her.

Where do the event heroes for riddles rank?

Last guardians I pulled falcon and jackal but I’m not sure where to use the challenge coins now that I have two of the more attainable event heroes.