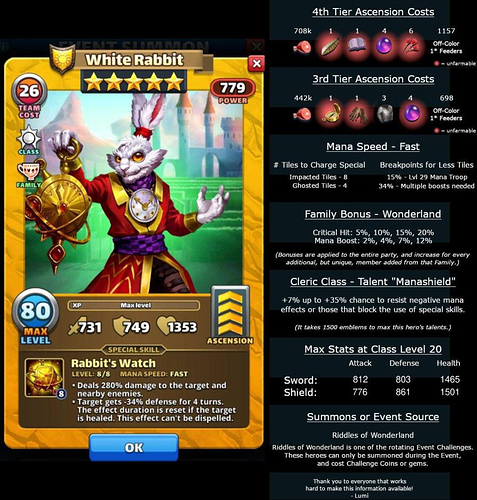 On average, in a 10-pull, you have a 2% chance of summoning White Rabbit.

Is White Rabbit worth Summoning For?

How many copies of White Rabbit would be useful to keep & Level?

What do you think White Rabbit’s Primary Purpose is?

What do you think of White Rabbit compared to other Heroes?

How does White Rabbit’s Special Skill and Intended Purpose match his Base Stats?

Is White Rabbit worth giving Cleric Emblems to?

In Defence, where do you think White Rabbit is best used?

How do you think White Rabbit is best used?

Curious to know if anyone has White Rabbit stats for his talent path. I’ve taken him down sword path the whole way, with defense secondary.

I’m currently stuck at node 8. Can’t decide if I should go with Attack Bonus 3% or Defense Bonus 3%. His defense is already higher than attack, so I’m leaning towards attack (HP would be next), but I’d like to see if anyone else can share their opinions. 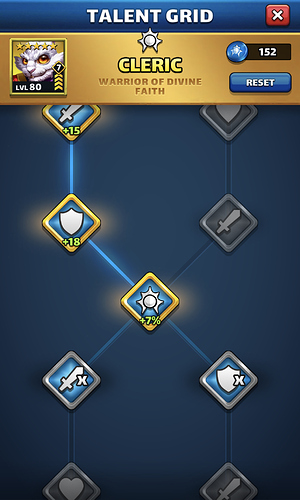 That’s just me though

Habe him only at +6 on attack over shield over heart path, and would stick to attack. However, my cleric emblems are going to rigard and dupes…
but rabbit is cool, if there would not be this conflict, he would get more emblems.

Attack 1st…have him on +8 (it was the beer,took the deff turn on 8)
Sober me…attack all the way

I went defence>attack all the way. He works very well in my defence team and is a top rate hero for me!

I would agree with @Warren500. If I have White Rabbit, the 8th node I’d choose would be the defense node since I want him to survive longer for his defense debuff to be inflicted against the enemy heroes. His skill design tells me that his main task is to debuff enemy defense. I would choose the attack node if the hero is a finisher like Kage or Lianna.

Thanks for all the input everyone! I’ll go for the defense boost, as I just remembered each defense point is worth about two health points. Let’s keep him alive a bit longer