Since there were many changes to the game I’m interested:

But let’s start with the main topic:

In the second quarter we have: 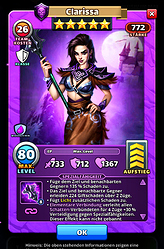 (only beta information, thank you @zephyr1 for sharing these Informations) :
Early Information on Raffaele

I would like to start with a comparison between first and second quarter:

Which quater has/had the better hero’s and why?

Which heros are your favorites until now ?

Which one do you got? And did you pull especially for them?

Did you summon just to get a HOTM? For which one?

Did you get what you wanted and how many summons were needed ?

I will put in more information as soon as they are released!!

If you’re interested you can read these topics about heroes of the month:
HOTM 2019

Atlantis impact on the hotm

I got Vela, Jean Francoise and Malosi, just by the way

but my favourite is Kingston from 2019 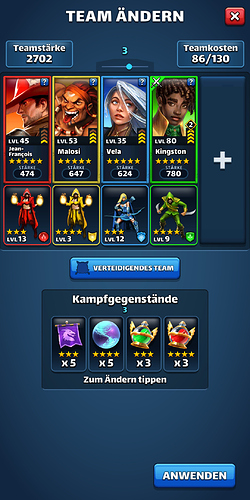 Here my HOTM . I put grimble because he was December .

@zephyr1 Which HOTM did you get and which ones are your favourite ?

These are my HOTMs i got my first one a year after i started to play. I never summon for a Hotm only but im pretty happy when i get one. I got Tellúria in the last hour haha

Well, i have only Telluria maxed, so i dont know which is the best yet. But im working on the other ones as well

@Lexxtarc I think Terullia is not as strong as she was at the beginning. so so it seems like Vela might be the best. Malosi is good, but not that strong, that I would say he’s better than Vela, but way better than Grimble

And Clarissa? i think she is really good though i havent seen her in the top teams of ranking

@Viktory2 That’s funny, because I also got every HOTM very short before the month was over

Kingston was my first one, and he’s the only one that I’ve completed, but I’m only playing since October

@Lexxtarc I have no idea about Clarissa

but her ability is looking good…

Yeah it’s been exactly like that with Vela, JF and Malosi

What I’m missing about the new heroes of the month, is the special ability to increase the Mana speed, like Kingston does…

You need a 3rd option: Pulled for it but all I got was this lousy Prisca

Ha! Votes for the first quarter being the best at 86%! I wonder which Hero they might be referring to…

For me, All 5 HoTM released so far this year would have been a worthy addition to my roster. Raffaele… I don’t know about him. So far, he looks to be the worse of the bunch but at least he is currently still in Beta, so things could change.

I also realised I seem to have much better luck pulling a HoTM when I’m not going for them than when I purposefully try. When I actually try, RNGesus is no where to be found.

@LogBomb damn now I can’t change it anymore, this would have been the option anyone could use lol

@Harlikwen yeah, seems to be the same for me… I never pulled for an HOTM I just got them by using event/Atlantis coins, if you pull especially for one, you won’t get it

My first and only Hotm until now is Grazul. I wish i can get another Hotm but it just too hard because mainly i can only do less than 10 single pull a month. Mainly from challange event, costumed portal, and valhalla

I do like Vela, awesome artwork and great against reds.

@zephyr1 Which HOTM did you get and which ones are your favourite ?

I got Malosi, and 2 of Clarissa (second one showed up today, and I also maxed the first one today).

I haven’t really had enough chance to play with Clarissa to see how I want to organize teams with her. She’s sort of an odd pairing for my usual purples, because of the overlapping Poison with Proteus and Sartana. I find myself a little reluctant to fire Special Skills and waste the DoT.

I’ll figure out where she fits in the coming days, now that I maxed her.

Malosi is useful and fun. He actually has fantastic synergy with my “nope squad” team, focused on Mana control and misdirection: 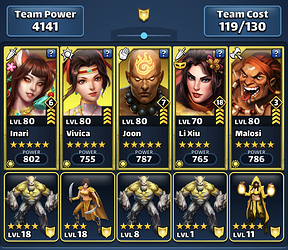