Is there anyone that’s more interested in past HOTMs than current/future ones?
Also at what point would you no longer do hero summons and solely focus on building existing depth and play style?

I’m planning on doing my next big summons when Zeline is all available then save up for the next time gravemaker comes around.

At this point I’m only interested in Alby, Zeline, Evelyn and Telluria.

I’m kinda interested in Hel, Kunchen, Alasie, and GM, but Jean Francois and Telluria have my attention now and I’ll be okay without the former 4.

As for summoning, I pretty much stopped that from June to October (Seshat took 2 coins and Kingston a 10 pull), but as I want no part of Perseus, Azlar, or Khagan I’ll be restarting my spending for a bit.

Yes. It seems that the past HOTMs include the great ones, and the more recent HOTMs, are less powerful. The recent ones may be interesting in a very specialized sense, but there are no Gravemakers, Kunchens, Hels, Zelines, Drake Fongs, or Albys among them.

This puts the new players at a significant disadvantage to those who play in 2017 and 2018.

Here is my desired list, the bold are the ones I’m chasing, the others I want but won’t be mad if I don’t get and the ones crossed out are the ones I got. Once I get all the bold heroes I’m done with summoning for the most part, will be doing free summons on tokens/coins only at that point. 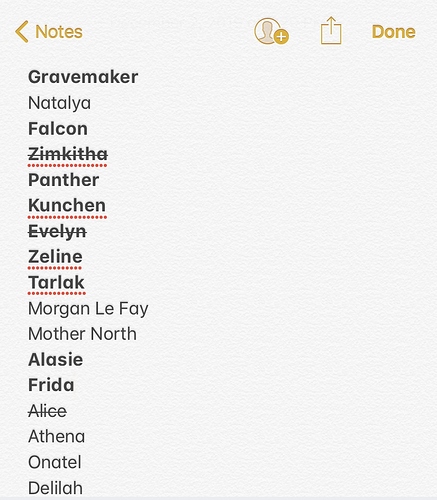 I really want Tarlak but I’m not really chasing him per se, because he’s available every Atlantis so I only pull for him when one of the HOTMs I’m chasing are also featured.

@Ashland I forgot about Hel, I’d like her too.

I don’t know who Tulleria is but Jean F did catch my attention. When pirates come back around I’d like to try for Finley.

As F2P I have Aeron and Gregorion.

Guin is not a HOTM. She’s a challenge event hero, so you have a much better chance at her than the others.

Ack you’re right. So Alby / Kunchen / Onatel / Hel. Two each from last year and this year.