For all related links, please see the guide thread below:

Really hoping it is a 3 star tourney! I want to take my Hawkmoon costume and Brienne costume into the tourney.

Got my food squad ready!!! 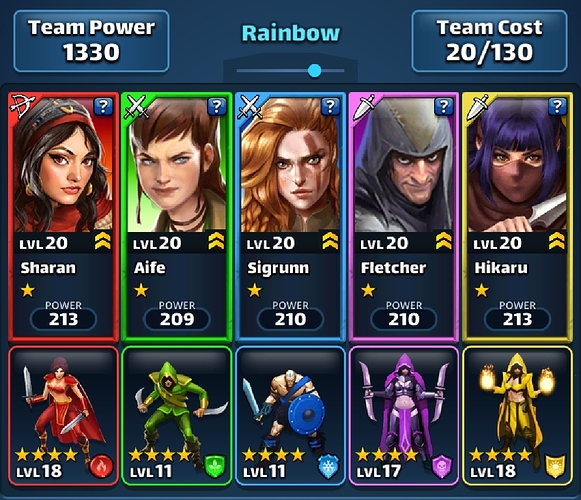 Well it is a 3 star very fast all elements. Here is who I am taking: 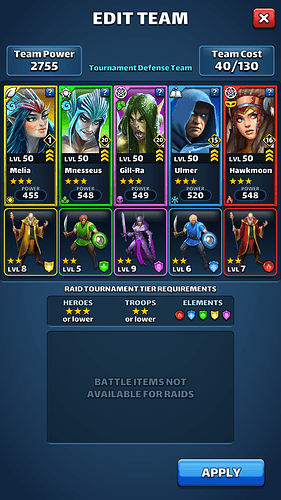 I think I’ll try this - 2 sorts of Mana control might be good? Or does it not work with very fast?

So not a 1* tournament (mega sad 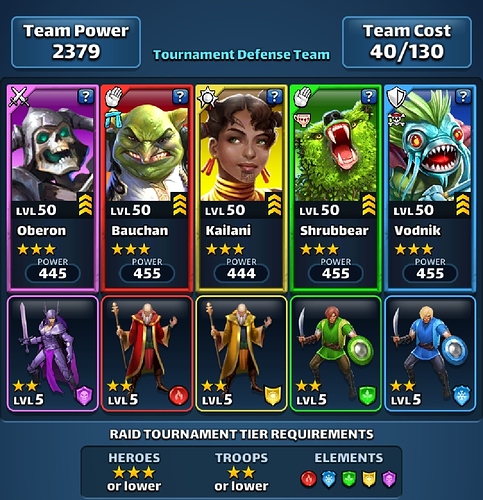 Slight edit. Now not running Gunnar as tank (cause I may want his costume in attack time)… Swapped in Kailani who does the same thing. Mainly there to soak up and hopefully fire off at least once.

Flanked by Bauchen and Shrubbear. Both at very fast will hopefully keep the enemy from firing specials (if they do, shrubbear will hold them off).

Wings are Vodnik and Oberon. Vodnik for the sniping damage. Oberon there for the big DoT.

I am going with this: 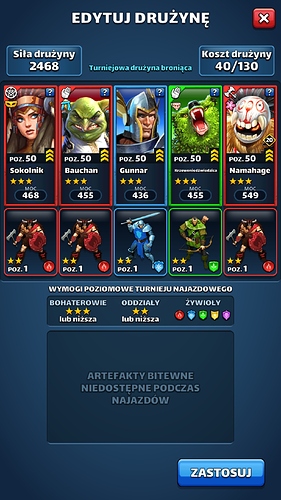 A lot of flaws there but some traps also. Blue stacks are attracted but they have no healer. Green stacks will be countered by the reds. I am not sure what to think about the Bear but maybe she’ll do well. If she’s in similar annoyance level to Black Knight. Rules are kind of generic, I also never do too well on 3 star tournaments. Beside the tournaments I never play or played with these heroes so I am lacking experience in this tier, and to be fair there’s no incentive to try too hard anyway (thanks for tall boots, grey tokens and 10 emblems for my 1% tier last week…).

@AngelOfDark666 good thinking. Or you just remembered what I said about rush attack all colours?

Yes, when all colours are allowed, the best defense doesn’t depend anymore of element. So, a defensive line-up with mana control heroes it is the best option to limit the offensive opportunities of the attacker. Also, let’s not forget the classes. We actually have a class which reduces the mana generation with 50%, don’t we? Though lasts only 2 turns, 50% is really brutal with this rule.

I actually managed to build a line-up with mana control only, skills and/or class: 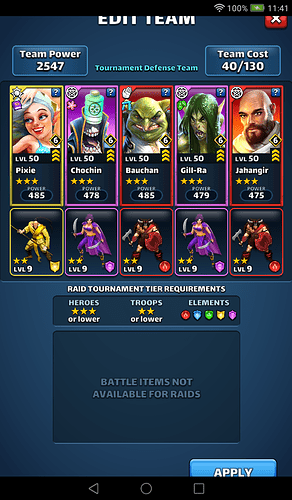 Pixie, Jahangir are still not maxed

so I think that is the best lineup I can bring. Ulmer’s def down could be nice. Maybe I switch Kailani and bring Gan Ju for mana cut, but I’m not sure.

This is what I am planning to use. Trying to utilize the family bonuses a little bit. Any suggestions are welcome. 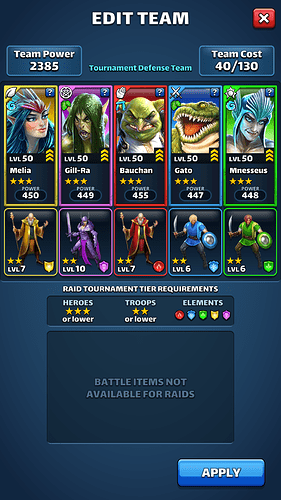 Pixie would have been nice. I always level the rare event hero once I pull it. Takes me few minutes anyway. Because like I said in many other occasions, TC 11 is for emergencies only. And I advised everyone to do the same, always to keep few hundreds feeders in there, no matter what. If you have the feeders, you should level Pixie. Her skill works even greater with rush attack, once the enemy is hit. Because the enemy hero will charge faster, therefore will die faster.

I don’t like Gan Ju. I think Kailani is better as flank. With this rule, with the tank delaying the opponent, she will likely fire and that buff could prove decisive.

Family bonus for 2 heroes is insignificant. Like in every rush attack, no matter the rank, AoE are also a priority. So heroes like Gato and Mnesseus are not efficient. I would set Ulmer as blue. And I wouldn’t set green at all (excepting the bear as tank).

Blue tank approach against all those deadly very fast Jahangirs. 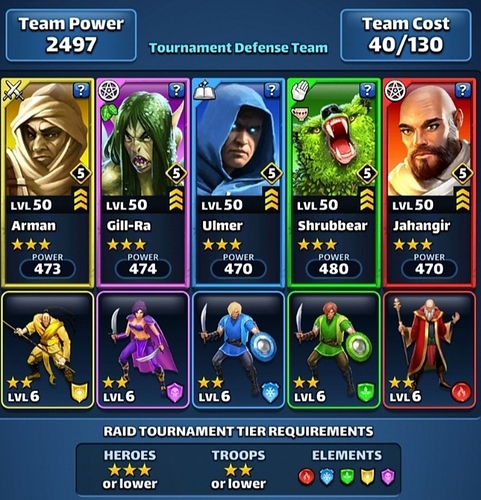 I will try with this,… 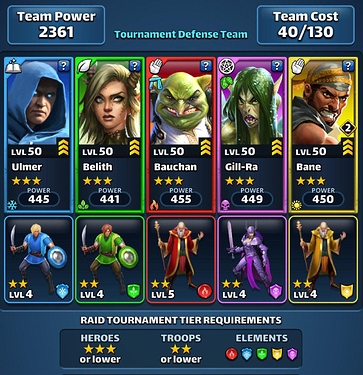 But I think Ulmer and Gill-Ra conflict each other. Maybe I should try to swicth Gill-Ra with Chochin.
Need advices anyone?
My bench:

But Chochin and Bauchan work against Pixie, she’s more deadly if Mana isn’t delayed or cut

I have this problem with my yellow 4*: Gretel with Chao, Li Xiu is suboptimal and only the slow Hu Tao doesn’t work against Gretel.

That’s why Pixie is wing, to not interfere with Bauchan. The tank will be likely dead anyway, when she will be ready. And she may target other hero than one targeted by Chochin.

I’m going to give the bear his first run out. 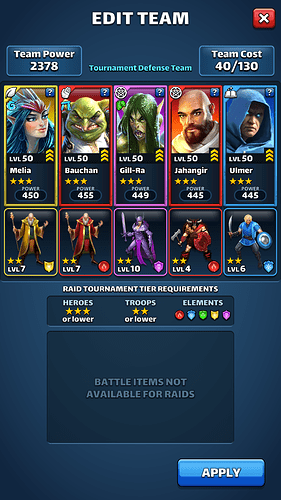 I don’t understand why everyone sets the bear flank, when is obviously tank. And Bauchan his flank. Protected by taunt, Bauchan actually may decimate the entire enemy line-up by himself.