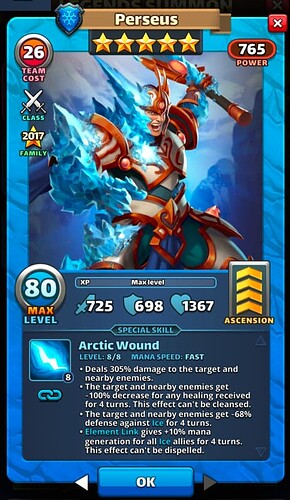 Beta Information: 🧪 Early Information on ROUND 2 of HoTM Costumes [Part of The Beta Beat v53]

What do you think of Costumed Perseus ?

This thread is for thoughts and discussion on Costumed Perseus.

Based on preferences Forum members have expressed, please try to stick mainly to Costumed Perseus and not wander off topic too much to other heroes.

Is Costumed Perseus worth Summoning For?

How many copies of Costumed Perseus would be useful to keep & Level?

What do you think Costumed Perseus’s Primary Purpose is?

What do you think of Costumed Perseus compared to other Heroes?

What do you think which version of Perseus is better ?

Is Costumed Perseus worth giving Paladin Emblems to the original hero?

In Defence, where do you think Costumed Perseus is best used?

How do you think Costumed Perseus is best used?

What do you think is Costumed Perseus worth Limit Breaking ?

If you would emblem Costumed Perseus then which Emblem Path would you select ?

I would use some pulls on him. He seems decent now. I like the high HP.

I have base Perseus at +15 and use him pretty regularly. This new version is essentially identical with now a massive EDD at fast speed. That percentage drop is so big I don’t see how he isn’t chased.

Factor in you can’t just heal unless you cleanse first and he can wreck your day.

Talk about from worst to first.

I’m gonna chase him. I need an blue EDD hero better than Nordri

I would like to have him to pair with Athena for the double hit 3 plus DD and EDD and the family bonus. Have yet to get a 5* from tavern, which is understandable with the abysmal chances. Maybe I’ll luck out with a few pulls here

Factor in you can’t just heal unless you cleanse first and he can wreck your day.

He’s even better. That heal blocking can’t be cleansed.

Ha, duh. In costume he goes from the only blue HotM hates more being Klaern to a prime hero.

@mogulemon it is +10% mana generation for 4 turns.
So it is not a direct mana gain like Xnolphod.

Aah now i understood, i thought it was immediate mana boost like xnol

Ha, duh. In costume he goes from the only blue HotM hates more being Klaern to a prime hero.

If it takes perseus 5 years to be good, klaern would take 10 years?

And he came after 29 pulls

got the cyber offer

On a side note, did SG made a mistake. That is a very generous offer.

Took me 14 pulls to get him, thnx to great cyber monday offer.
Great titan hero.

I see it’s still there, I am sure by now it would have been corrected just as it happened during springvale two years ago with the Ham. It is a nice offer, however not off the roof though, the 30 pulls offer on the last day of the event does not differ much in price.