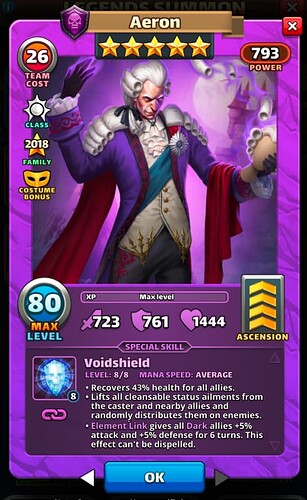 There appear to be no changes to Costumed Aeron from last-seen Beta stats, skill, and design.

Beta Information: 🧪 Early Information on ROUND 3 of HoTM Costumes [Part of The Beta Beat v54]

What do you think of Costumed Aeron ?

This thread is for thoughts and discussion on Costumed Aeron.

Based on preferences Forum members have expressed, please try to stick mainly to Costumed Aeron and not wander off topic too much to other heroes.

Is Costumed Aeron worth Summoning For?

How many copies of Costumed Aeron would be useful to keep & Level?

What do you think Costumed Aeron’s Primary Purpose is?

What do you think of Costumed Aeron compared to other Heroes?

What do you think which version of Aeron is better ?

Is Costumed Aeron worth giving Monk Emblems to the original hero?

In Defence, where do you think Costumed Aeron is best used?

How do you think Costumed Aeron is best used?

What do you think is Costumed Aeron worth Limit Breaking ?

If you would emblem Costumed Aeron then which Emblem Path would you select ?

Lift of ailments should go first, since he doesnt do anything else…
Remains subpar hero…

Please give him some love before release

I do have him. He is fully leveled, emblemed and LB.

He is pretty useful during very fast war, keeps Alrike’s mindless attack away. Also during buff busters, adding 3 or 4 buffs depends on if you have another 2018 HOTM.

Costume would be useless for very fast wars against Alfrike. It would still work for buff busters with reduced number of buffs.

If I receive him, I would level his costume because I already have the original form.

But otherwise I do not think, it is worth it. Unless you have no other choice.

I feel like he should be the healing version of lady Loki. Increase healing for each ailment reflected back

Kinda like him, unlike C-Aegir who seems to be terrible. Healing and debuff cleanse and distribution is handy and goes better than with damage (looking at you, Lady Loki). Still agree with @Cerevan_the_Omni that lift should come first, to get rid of heal reduction or Xiaotu’s heal block + dmg.

Wouldn’t mind him also doing something in plus, because C-Rigard is still better barring stats and he’s easier to ascend and limit break, and he has second costume coming to make stat difference even lower.

im not a fan of him oe ageir

one of the worst tavern events.
all 3 featured are not appealing.

sad they ignored the beta feedback to buff them as usual.

0 interest to do any pulls even with the free tokens

Maybe check the portal again in a couple hours. The specials could change.

No need to waste precious gems on this hero. In today’s meta, buff should affect all, not just nearby.

I think he is an okay hero, but I agree with all that he needs some better balancing. As @Noxyking said, he should lift the ailments from all especially considering that The Hatter pulls all buffs from all enemies and is also Average speed. Also as @Cerevan_the_Omni said the lifting of status ailments should come before the heal.

Currently Ana-Belle and Diaochan are still much better healers than C.Aeron. I will use him since I pulled him, but he does need a little love to really be a part of this meta.