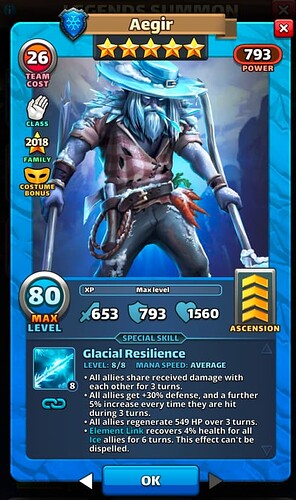 There appear to be no changes to Costumed Aegir from last-seen Beta stats, skill, and design.

Beta Information: 🧪 Early Information on ROUND 3 of HoTM Costumes [Part of The Beta Beat v54]

What do you think of Costumed Aegir ?

This thread is for thoughts and discussion on Costumed Aegir.

Based on preferences Forum members have expressed, please try to stick mainly to Costumed Aegir and not wander off topic too much to other heroes.

Is Costumed Aegir worth Summoning For?

How many copies of Costumed Aegir would be useful to keep & Level?

What do you think Costumed Aegir’s Primary Purpose is?

What do you think of Costumed Aegir compared to other Heroes?

What do you think which version of Aegir is better ?

Is Costumed Aegir worth giving Paladin Emblems to the original hero?

In Defence, where do you think Costumed Aegir is best used?

How do you think Costumed Aegir is best used?

What do you think is Costumed Aegir worth Limit Breaking ?

If you would emblem Costumed Aegir then which Emblem Path would you select ?

Only reason that I can think of that anyone would want cAegir that they would already have his original form leveled and emblemed. Even than he might not be worth it.

Additional healing is nice though.

FYI, I have him fully leveled, LB and emblemed.

I am sure you already guessed it, I am F2P

He will be the first buffer hero with average speed and 3 turns buff!
And he would be subpar or average in competing vs current buffers if he was 4 turns.

Had Aegir emblemed for years due to lack of other Paladins. If I remember correctly, the last time I used him anywhere was the first instances of a paladin emblem quest, so that my team has some kind of healing…

Stripped him now to give the emblems to Ludwig.

He needs a lot of buffing and this costume as well. Make him more dangerous, add to his special something like

This guy does three thing but any of them well:

Compare him to Zircon, who has at 2x charge (~Average speed), lower healing but actual boost, slightly higher defense, and shared damage replaced by dispel block, on top of having better stats, much better family bonus, and possibility to fire sooner when for example negation of defense down is needed. Also same color.

No reason to try to pull for this guy.

Not worth it. In some ways the classic is better healing.

Totally not worth pulling/ascending. And that’s great. We need more heroes like that, to preserve the very last pieces of sanity.

I’m genuinely gobsmacked by how bad the costume is.

The costume’s heal is so poor, especially in this day and age. It would have been decent in 2018.
At least make it boosted health.
Or add a small amount of mana.
Or increase mana gain.
Or do what Aeron’s new skill does and remove the negative status effects.
Or block new status effects

Killhare’ll be happy she’s got a carrot buddy though.

If it was even 30% damage reduction then it would be a gamechanger.
I dig the costume though, it’s one of the better designed costumes because it actually looks like what a costume for a hero should be
These are quite old HOTMs, they should have higher quality effects. If they can do it to c Perseus, why not him?

Might it be possible to adjust this poll as well as other polls with ‘hero design’ (awesome, refreshingly new, meh, fail,…)?

We used to go after heroes, collect them, loved them and tried to integrate them in a team.
Nowadays with the abundance of heroes, some of them never leave the bench because they are outdated, some of these are such gems you really have to admire them, keep them in your collection (and use them on easy Tavern-stages😋). The most evident example is Red Hood.

Therefore I think an additional question in your poll might be interesting in order to praise a hero for other reasons than gameplay.

Ok, I can adjust the poll of these new Tavern costumes with this question, and I will add this for any upcoming heroes.

I say c aegir’s design is refreshingly new. It’s a costume that is not within the theme of the hero. In this case c aegir is given a farmer theme which is in contrast with the blue icy stature he has. He gets out of his battle armor and dons on farmer-wear, loose clothing with farming equipment. And he legit looks like he’s wearing a pair of sneakers due to the snow covering part of his shoes and making it look like shoelaces. The hat looks a little bit off though. He’s like a farmer frozen by an arctic spell
I say there’s some thought put into the design of this costume. It’s really nice and one of the better costumes.

I prefer the original in an offensive off color stack. Use him with Ratatoskr and Tarlak and each tile heals for over 700+. Original copy definitely has its uses.

I’m using him on attack and he is great, like a big ice shield for everyone! But on def, that health needs to be boosted and definitely 4 turns.

Look at him and look at M&M… come on.