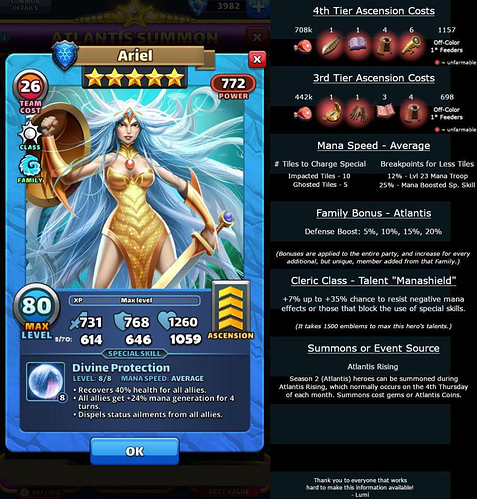 On average, in a 10-pull, you have a 3.2% chance of summoning a particular Featured Hero.

Is Ariel worth Summoning For?

How many copies of Ariel would be useful to keep & Level?

What do you think Ariel’s Primary Purpose is?

What do you think of Ariel compared to other Heroes?

How does Ariel’s Special Skill and Intended Purpose match her Base Stats?

Is Ariel worth giving Cleric Emblems to?

In Defence, where do you think Ariel is best used?

How do you think Ariel is best used?

Nothing to say about Ariel?

I finally pulled her this week-end. After a failed attempt last time she was featured (and got Mok-Arr instead…).

I started levelling her, but have already Vela on the way. After 9 months of playing, they are my 2 first 5* blue. Hopefully, by the time i have almost the mats to max both.

The goal is that she replaces Rigard in my team, but at +18 he is quite a beast… and I don’t even have his costume.

I pulled Ariel a year ago. She is my stellar hero, used everywhere. I love the mana boost.

Best healer in the game

This might sounds crazy but I need to be clear. Do the 24% mana generation means Arial speeds up your mana regeneration by 24%?

24% mana generation means that each tile is worth 1.24 rather than 1 unit.

I’m a bit embarrased to say I have three Ariels, one with 18 emblem levels. She is my favorite healer in the game, and on average mana very strong. She also cleanses which is also a vital skill. The mana generation plays right into the stack with Alby’s mana recuperation (the same is true with Khagan’s special, but he doesn’t see a lot of action). If I get both up and running with their special at the same time, I have a mana generating machine that speeds them up and all other heroes on top of their mana troops. Her cleric manashield is great too, because this will negate Telluria’s mana slowing effect in about 30% of the instances. I love to take her in a 3-2 formation in combination with either Frida, Arthur or Alasie, the other color strong on the tank. Her family bonus with Poseidon and Atomos is also very nice. Put a level 23 mana troop under her, and you are set…nothing bad I can think of, other than her non-emblemed health which is on the lower side with 1260, but still a nice defensive stat with 768. In essence she is a better, faster Vivica.

Give me one of yours!!

Trade her for: Miki, Finley or Jabberwocky?

I have none of those, would you like my horghall instead?

Hahaha! Sorry mate, already have him at 3.70…I truly have an obscene amount of 5* heroes (46 at 4/80 and another 11 at 3.70), so my wishlist has shrunk a bit… I think I have all the vanilla heroes except Elkanen, and a good amount of HOTM’s. Come to think of it, Zeline, Zimkatha or Athena would also be nice, I don’t have them either. And I wouldn’t mind having Ursena and/or Kageburado from Atlantis too…d@mn, I thought my list was shorter!

Elkanen! I can give you him. Just take him away

With or without costume?

Wait… this is an underground place where you can trade heroes…is this even legal?

Ariel for Jabberwocky and I’ll give you, 1o orbs, shields, hidden daggers, trap tools, gloves, compasses and warm capes…let’s do it

Wowsers! That’s one hell of a great roster to choose from!

I have 13, and three of those were maxed in the last week, including Ariel