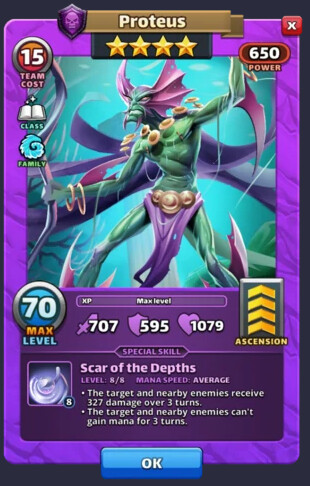 What do you think of Proteus ?

This thread is for thoughts and discussion on Proteus.

Based on preferences Forum members have expressed, please try to stick mainly to Proteus and not wander off topic too much to other heroes.

*NOTE: Summon Results posted without any commentary/feedback at all should be flagged as Off Topic and removed, based on preferences expressed by the Forum community. Please include some comments about what you think of Proteus when posting Summon Results. In addition to opinions about Proteus, you are also encouraged to include how many Summons it took before receiving Proteus (or how many Summons you’ve done without receiving Proteus), so other players are presented with realistic experiences of the rarity of Epic Event Hero.

Is Proteus worth Summoning For?

How many copies of Proteus would be useful to keep & Level?

What do you think Proteus’s Primary Purpose is?

What do you think of Proteus compared to other Heroes?

How does Proteus’s Special Skill and Intended Purpose match his Base Stats?

Is Proteus worth giving Wizard Emblems to?

In Defence, where do you think Proteus is best used?

How do you think Proteus is best used?

If you would emblem Proteus then which Emblem Path would you select ?

still a hero that stands the test of time, in my opinion

I was fortunate enough to get 2 of him, and use both every war.

I agree, I can’t say how many times I used Proteus trying to beat some difficult stages or quests. With +20 emblems and LB he’s still quite fragile, but he’s invaluable for me. I like mana controllers of all kinds.

Yeah still a great hero very handy for new folk trying to clear the map or events or trials …
Got 2 maxed only been given two … One +7 mainly use in 4* tournaments and VF war now.
but definitely worth maxing 2-3 of this hero.

He has done a great job of avoiding me. I have stock piled on Hansel, Gretel, Merlin, Little John, Chao (in and out of costume), Leonidas, Peters, (not so much Li Xiu), etc. On difficult things I bring multiple mana control heroes. If I had Proteus I could do what needed to be done with just 1 hero slot.

At this point if I do get him I would not use him out of personal spite: “Sure, NOW you show up…

”. Smart play would be using him though, I am just stubbornly unsmart

Proteus seems to be the go to - response for so many questions. “How can I do xx stage if I am underpowered”. The answer is often “Just bring Proteus”. A wildly popular four star - mana control is everything.

He was the second 4* I ever got… I was elated

I have since been lucky enough to get Hansel, Gretel and Merlin… but Proteus is still the mana controller of choice when there are 2 or more enemies.

The only S2 4* I couldn’t manage to get and probably never will. I really don‘t know why he refuses to pop out of this portal.

As I‘m not doing much S2 pulls theses days, it will not be easy to get him.

Proteus seems to be the go to - response for so many questions. “How can I do xx stage if I am underpowered”. The answer is often “Just bring Proteus”. A wildly popular four star - mana control is everything.

Yup. There’s a good reason for that. Who care if there are OP heroes if you can stop them from gaining mana so they don’t fire. There is an obvious snag against cleric and monk classes, but otherwise, once you can get him to fire in 9 tiles or less, it’s pretty much a win. That’s aside from challenge and events. That being said, some of the later season 4 maps have immunity to ailments, so he is useless there.

I got him yesterday after chasing him for months. I will insta max, emblem and LB him. Hopefully he will be one of my most used purple heroes.

When is proteus getting a costume?? He needs a buff of some sort so he’s not so squishy. Great hero but really needs a costume at this point for at least the costume bonus if nothing else.