This thread is for discussing strategy related to Peñolite, as well as your thoughts on him. 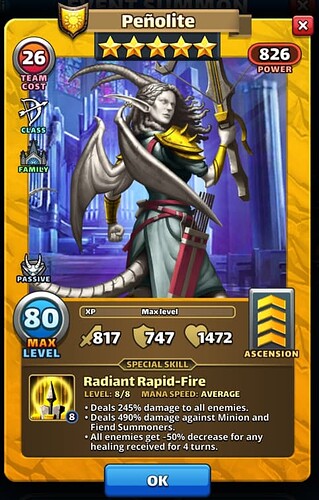 There appear to be no changes to Gaillard from last-seen Beta stats, skill, and design.

What do you think of Peñolite ?

This thread is for thoughts and discussion on Peñolite.

Based on preferences Forum members have expressed, please try to stick mainly to Peñolite and not wander off topic too much to other heroes.

*NOTE: Summon Results posted without any commentary/feedback at all should be flagged as Off Topic and removed, based on preferences expressed by the Forum community. Please include some comments about what you think of Peñolite when posting Summon Results. In addition to opinions about Peñolite, you are also encouraged to include how many Summons it took before receiving Peñolite (or how many Summons you’ve done without receiving Peñolite), so other players are presented with realistic experiences of the rarity of %%HERO_KIND%%.

7 Likes
:rock: [MASTER] Sanctuary of Gargolyes Challenge Event – Guides, Discussion & Summoning Results
Black Friday Summon?
HeroPlan.io - Tool for tracking your profile's progress, sharing it & to Plan your Hero Use for Class Trials, Challenge Events, Wars, Tavern of Legends Titans AND MORE!
Which 5* hero do you want the most from Sanctuary of Gargoyles?
PlayForFun November 22, 2021, 1:16pm #2

Is Peñolite worth Summoning For?

How many copies of Peñolite would be useful to keep & Level?
Note - this is roster space dependent & isn’t the same for everyone!

What do you think Peñolite’s Primary Purpose is?

What do you think of Peñolite compared to other Heroes?

How does Peñolite’s Special Skill and Intended Purpose match Peñolite’s Base Stats?

Is Peñolite worth giving Ranger Emblems to?

In Defence, where do you think Peñolite is best used?

How do you think Peñolite is best used?

Ohh I just love all the shiny new additions! Wish I had better luck in the portals. still, they are so nice to look at and dream about!

Op heroes like this are killing the game sadly.

If it was any faster it would be super ridiculous. And she’s already just plain ridiculous.

Average down to 9 tiles and she’s into autowin mode.

her special is just an auto win feature. come on? for average speed? lmao… no more words bc it´s not like my opinion would make any difference.

Oh no, there are so many Zulags, Glendas, Reubens, Bertillas and Ureauses shivering in dark corner because their shiffy [f → t] minions. And hey … all druids, cause they summon minions too xD

Any minion or fiend summoner is just wrecked in 9. 9 tiles can come quick. I’ve been ruining people with Hel in 9 tiles. And this lady is a leap ahead of Hel in power.

for the love of god :S

Does it work vs C kadilen? or Inari?

Useful for those who dont have a heavy bench. Otherwise with 9 tiles, you win already.

think no as its not direct minion summon, but if we go by text then yes. Can anyone from beta confirm it?

They went too far in hit all heroes. Soon we’ll have a 800% damage to all fast hero. This hero is just the epitome of the ridiculous. Not even 95% of slow hit all heroes can do that much damage neither have those stats. Jesus.

Does it work vs C kadilen? or Inari?

The answer should be “yes”. Puss-in-boots summons a minion for cKad, so I believe cKad is considered a minion summoner. Not sure about Inari, but it should be the same effect for Inari. Penolite is OP, IMO!

for the love of god :S

We have tested it and a fellow Beta Tester have also asked Staff about it in Beta area of the forum, and it will not work on Druids:

Druids are not considered as minion summoner

I have added clarification to the OP about this.

that ■■■■■■■ sux these heros are not the best heros already and now get worse?

make it fiend summoners only.

To be fair, this is a 0.1% hero, Myztero level pull chance. So she’s gonna be OP

Yes, this is rare. Terrible odds…
Just like most other 5*
Only they get featured from time to time.

However,
I’m unable to find the "Myztero is OP" debate