This thread is for discussing strategy related to Bellerive, as well as your thoughts on him. 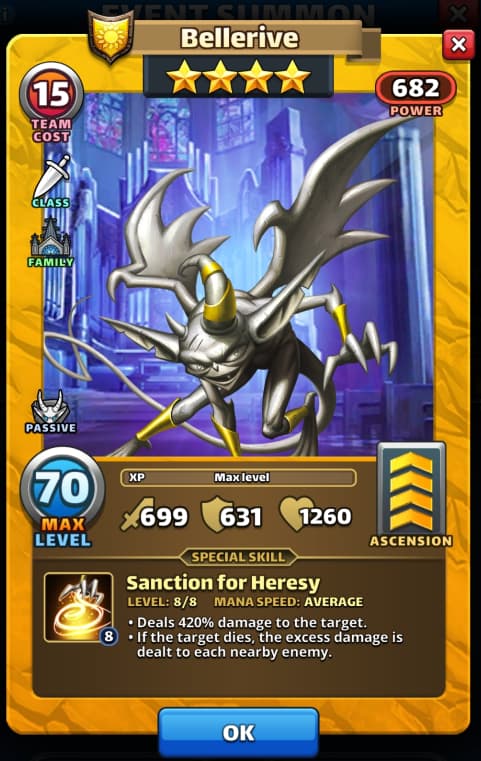 There appear to be no changes to Bellerive from last-seen Beta stats, skill, and design.

What do you think of Bellerive ?

This thread is for thoughts and discussion on Bellerive.

Based on preferences Forum members have expressed, please try to stick mainly to Bellerive and not wander off topic too much to other heroes.

*NOTE: Summon Results posted without any commentary/feedback at all should be flagged as Off Topic and removed, based on preferences expressed by the Forum community. Please include some comments about what you think of Bellerive when posting Summon Results. In addition to opinions about Bellerive, you are also encouraged to include how many Summons it took before receiving Bellerive (or how many Summons you’ve done without receiving Bellerive), so other players are presented with realistic experiences of the rarity of Epic Event Hero.

Is Bellerive worth Summoning For?

How many copies of Bellerive would be useful to keep & Level?

What do you think of Bellerive compared to other Heroes?

How does Bellerive’s Special Skill and Intended Purpose match his Base Stats?

Is Bellerive worth giving Rogue Emblems to?

In Defence, where do you think Bellerive is best used?

How do you think Bellerive is best used?

What do you think is Bellerive worth Limit Breaking ?

If you would emblem Bellerive then which Emblem Path would you select ?

Pulled im gonna max … I got ,© white rabbit so they could do some damage together… lvl 17 mana troop + rouge node is nine tiles …

If anyone has tried them two lettuce know …

They works well together but it’s the most basic of 1-2 hit combo.

That made me laugh “lettuce know” goes great with spring onions

Got him/her/it together with Arco in a ten-pull. Probably doing the 3-Kingdoms overheal-lady first, though. (Too many new heroes. Can’t keep the names straight.)

Got him… All of them are great. I will break him and give emblems.

Pulled Bellerive in a coin pull. Is he/she any good?

Is Bellerive worth Summoning For?

I had been through that before posting but not what I’m looking for. I would like to hear some personal opinions based on experience.
Quite frankly, I found him/her to be meh!

I got bell, but i won’t level for a while. I’m not impressed on The surface, but i did get 3 kalo’s… So I’ll probably pair them together in 4* raids tournaments.

I am not going to level Bellerive.
I do not spend anymore to satisfy Zynga/SG GREED. I stopped spending due to the incessant ‘grab’ tactics (releasing heroes & then nerfing them). C Krampus was the final nail in the coffin.
So, Bellerive is gonna warm the bench for quite some time

I got her just today, and could not test her properly yet. But I lack 4* yellow heavy hitter and she hits very hard for 4*, even if she’s average speed. If she kills her target the residual damage is done to her flanks (actually here I am not sure - wording implies that excess damage is done to each flanks, ie. it is essentially duplicated. I need to test this). She also resists Poison but that is not that essential, as there are really few heroes that spread poison (though with Rayne that can change). More importantly she gets 3 hits reduced to 1 after casting her special, which is one of instances where slower speed is better, as for +1-2 tiles you get +1 hit resisted when comparing Average Gargoyle with Fast.

TL;DR: So she deals a lot of damage, if it kills target does some damage to flanks. Also resists 3 hits after casting SS, meaning she can also tank damage. Resists Poison when not with other Gargoyles, which might be handy to break chain in poison spreading from Rayne.

I think I will ascend her just because her damage is never wasted unless she kills last target and has good tanking properties.

I think he pairs well with Grimm who hits the middle hard and minor to the sides with DD.

I’m needing to decide between her and Griffin for my next yellow. Who would you take?

I hurriedly leveled him for the war.
He has become one of my favorite heroes because my yellow roster is so weak and war opponents are very often purple tanks.
Gargoyle’s stone skin allows it to survive long enough in combat with LB 5*, and his class is rogue, which boosts survival.
When his skill is combined with DD and EDD, he deals about 800 damage to the target and nearby enemy.
If I get another one at the next Gargoyle event, I will probably level it too.

I love how nobody gave 2 craps about this hero

Makes sense that that’s one of the ones I pulled… lol.

Bellerive is awesome!
I combine it with Arco. The hits are very hard and the side-kick if the target dies is phenomenal. The extra damage is not split over the two neighbors, but both get the full package. And it’s a Gargoyle, the Stone Skin is simply great. I’m using this one over some 5* yellow hitters like Leo, Bai Yeong and even sometimes over Uraeus. His stats are quite similar to fully emblemed Uraeus… 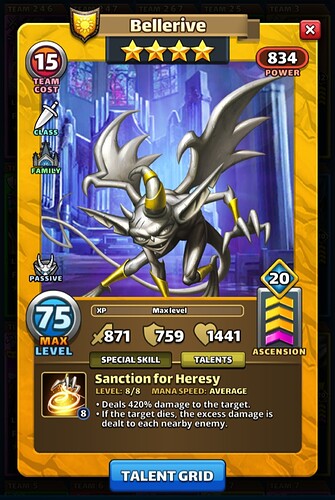 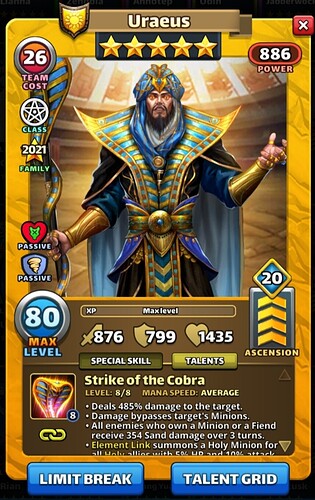 I pulled bellrive i should prob level above griff