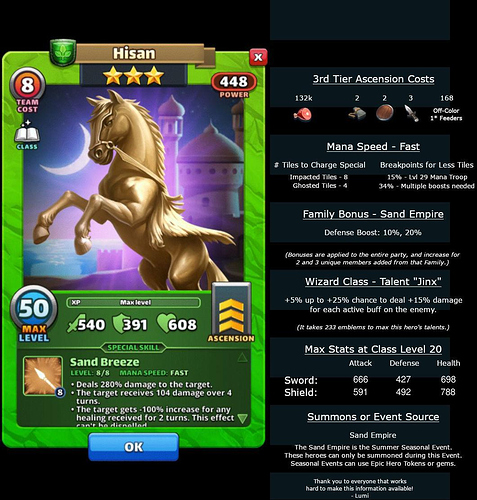 It’s important to remember that Seasonal Event Heroes have extremely low summoning odds. No amount of summoning will guarantee a Seasonal Hero.

On average, in a 10-pull, you have a 52% chance of summoning a particular Seasonal Rare Hero.

Is Hisan worth Summoning For?

What do you think of Hisan compared to other 3* Heroes?

How many copies of Hisan is it worth keeping & levelling?

How does Hisan’s Special Skill match his Base Stats?

What do you think Hisan’s Primary Purpose is?

Is Hisan worth giving Wizard Emblems to?

Where do you think Hisan is best suited on defence (in a 3* arena)?

How do you think Hisan will be best used?

How does his damage compare to Mnesseus?

Also comparing to Berden who is the other 3* green sniper:

Note damage is calculated against a 3* opponent.

I was thinking of making a mono green event team for Knights of Avalon now that there are several 3* defense down heroes like C.Isshtak, C.Berden, C.Brienne. Also Blue is reflected for Avalon so I wont be able to use my mono blue (C.Gunnar, Nordri, Gato, Gato, Karil+CB).

Currently I have C.Brienne, C. Isshtak, C.Berden, Mnesseus x3 (2 still need to be leveled) to choose from. I think C. Isshtak might be better than C. Brienne for defense down. Then I will probably replace Mnesseus with Hisan if I can pull some and use Hisan with Berden+CB.

The downside is that his SS is comparably slower in its animation.

That’s I good point. Mnesseus’ animation is also really slow tho. He goes “pew pew pew”. I’m not sure how it compares to Hisan’s.

What do you think about C.Isshtak over C.Brienne for defense down? C. Isshtak has higher attack and his SS also does dmg. There will also only ever be 3 enemies in a Challenge stage wave too so he will give defense down to all 3.

I have it but haven’t compared them. C-Brienne has the benefit of calling out at like -64% defence debuff which is pretty huge.

Sorry for off-topic but does C-Brienne’s additional -4% defense down every time enemy is hit include getting hit by battle items?

I’ve just pulled him and thanks to your analysis I’m gonna use him in Avalon rare challenge instead of Mnesseus.

I’ve just maxed Mnesseus and this horse shows up. Hisan and C Berden are both 1/1 and I want to use a green team in the Knight of Avalon.
So the team is Belith - Isshtak - By-Ulf - Mnesseus - Hisan/Berden/Brienne/Grevle.

In the fifth slot I go for extra sniper ( C Berden or Hisan ) or support ( Brienne or Grevle ) ?
I’m afraid i haven’t enough firepower in my green team.

Personally I would ditch By-ulf & use 2x snipers… KoA don’t really have any buffers (except for BK) so I don’t think you need Mnesseus for the debuff. Can probably use: Belith, Isshtak, Hisan, Berden, Brienne/grevle

Just pulled 4 of him from my saves EHTs. Only wanted roc or Rana but no luck unfortunately.

Anyway, how many of him are worth to keep?

Personally I kept 2 to use in Challenge events with Berden. But can easily get away with keeping just one of you’re pressed for space.

Just had a Blue chest, got 1x EHT and pulled this hero.
Seems good so I will keep and hopefully use.