All-in-one still under construction, will be added when available.

The new heroes form the “Starfall” family and have a family bonus for each unique hero in the team:

Faline recieved a boost to direct damage from 250% → 290% since final beta testing.

Is Faline worth Summoning For?

How many copies of Faline would be useful to keep & Level?

What do you think Faline’s Primary Purpose is?

What do you think of Faline compared to other heroes?

How does Faline’s Special Skill and Intended Purpose match her Base Stats?

Is Faline worth giving Wizard Emblems to?

In Defence, where do you think Faline is best used?

How do you think Faline is best used?

I got Faline from a single coin pull today!

I was tired from my office work today. I was only able to begin the Starfall Circus challenge a few hours ago. After doing the first four Rare stages, I checked the heroes from the summon portal. Since I just got the Challenge Coins from the Path of Valor recently, I thought, “Heck, I will try my luck with my two coin pulls. Not using any gems to pull from this one anyway.” … And well, surprise! With a single pull, I got Faline. I was happily shocked.

One thing about Faline which isn’t very clear is that if she hits three heroes with the same speed, all are slowed. The other Starfall heroes do the same thing but they only affect more than one hero in rare cases. Faline vs Bera Frigg Odin may be useful!

so her damage is buffed to %290 but her mana gen cut is cleansable now.

wow fast, 3 hard hitter. she will be annoying

friend, notice that the values you put are beta the hero has 784 attack / 751 defense and 1394 life look at this data to correct the post greetings 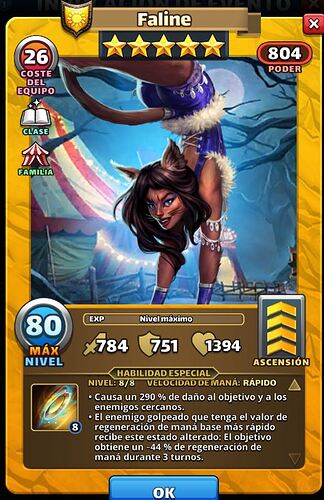 She is good when hitting 3 targets with same Mana Pool.
All of them got the effect. But if you hit one with Fast or V.Fast then that Hero will get that ailments alone

This was definitely intentional… as The Frigg, Bera, Odin core is highly prevalent. She’s a counter in the right color as well. Also will be quite good against all the double raid defenses because of her damage.

I assume if it was Frigg, Garnet, Odin… Only Garnet would get the ailment though.

She will be great against formations as well, hitting all in double and reverse double.

How does she work against ninjas? These cards do not have a mana speed description like fast or slow.

Ninja heroes’ charge mana speed is the fastest mana speed… (Faster than Very Fast)
So the mana speed decrease debuff should be applied on them if they are amoung the hit heroes.

I believe that current health is 1394. If I am not mistaken 1442 was the beta health. This paramenter changed since the start of the event.

@Forti
You are right, this is also changes as it can be seen on @ratabboypda 's screenshot:

@Guvnor it looks like this needs a fix too… 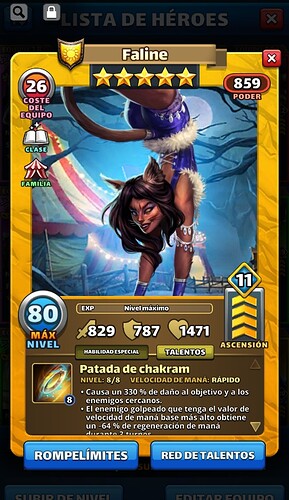 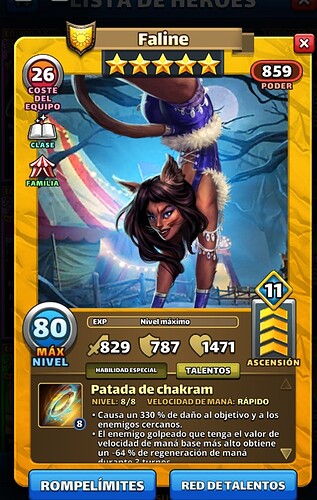 The upgraded Faline is a beast!
Very happy to pull her today.
330 Damage to 3 targets and mana reg cut for a fast hero is astonishing.
Happy Ravah

Yep…you might even say overpowered? Nah, give her ANOTHER buff SG!

Just pulled her today for the challenge fest. What does everyone think? Still relevant with all the super powered heroes that have come out? I have Wolfgang, Odin, Zuri, Motega, Akkorog maxed. I also just pulled drake fong + costume and have Horus to level. Anyone have thoughts if she should jump any of those heroes for leveling?