This thread is for discussing strategy related to Costumed Ameonna, as well as your thoughts on him. 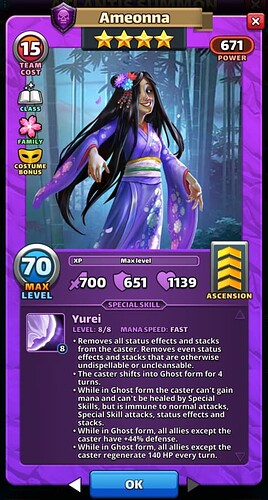 There appear to be no changes to Costumed Ameonna from last-seen Beta stats, skill, and design.

What do you think of Costumed Ameonna ?

This thread is for thoughts and discussion on Costumed Ameonna.

Based on preferences Forum members have expressed, please try to stick mainly to Costumed Ameonna and not wander off topic too much to other heroes.

3 Likes
HeroPlan.io - Tool for tracking your profile's progress, sharing it & to Plan your Hero Use for Class Trials, Challenge Events, Wars, Tavern of Legends Titans AND MORE!
PlayForFun April 30, 2022, 4:57pm #2

Is Costumed Ameonna worth Summoning For?

How many copies of Costumed Ameonna would be useful to keep & Level?

What do you think Costumed Ameonna’s Primary Purpose is?

What do you think of Costumed Ameonna compared to other Heroes?

How does Costumed Ameonna’s Special Skill and Intended Purpose match his Base Stats?

What do you think which version of Ameonna is better ?

Is Costumed Ameonna worth giving Sorcerer Emblems to the original hero?

In Defence, where do you think Costumed Ameonna is best used?

How do you think Costumed Ameonna is best used?

What do you think is Costumed Ameonna worth Limit Breaking ?

If you would emblem Costumed Ameonna then which Emblem Path would you select ?

I got her and have plenty of emblems. Will be extremely useful for buff tournies and 4 star events. Excited to test it out.

I see that nobody cares about this hero😃 . Don’t worth the food.

A fast healer that raises everyone’s defense? Sure go ahead and skip it.

If you have her consider that at Fast speed she will-

Heal over time for 560 health.

From the card it seems they cannot be dispelled as she is immune to special attacks while in ghost form.

I’m so glad I got her! I’m so desperate for a fast Dark Hero and have been for such a long time, that I plan to level, emblem and LB her.

Edit: With her costume, mind you. Not sure how good she is without.

Without she’s not useful much at all. Years ago when she came out she was good for tile damage on titans. I’m intrigued a lot with the costume. Would have had her maxed but I drew Khonshu. Whoops!!

I agree, absolutely! I´ve not used her at all without the costume. Maybe if one is fighting lower level titans, her tile damage and invisibility could be useful

And again , i have never so anybody uses her , but i am sure she is useful. Like somebody said , no body can use you if you are useless!

Standard version and other heroes with ghost form auto attack each turn.

This is incorrect. Only Stonecleave can attack while in ghost form because his skill description says that:
While in Dire Ghost form, the caster automatically deals 150% damage against a random enemy each turn.

I could maybe see her being useful in a tournament in offense but on defensive her special creates a space for ghosting tiles.

She´s still all I have, when it comes to fast Dark Heroes.

I´m trying to make the best of her, but I often find myself taking Sabina or Rigard instead, because I need dispell or cleanse. That being said, I´m sure Amoenna has her moments. It just often seems to hinder my gameplay with the other heroes needed, but it´s probably because I haven´t got any Dark Snipers etc. either.

And yes, she might not be fantastic on Defense because of the way she works. I do like that the buffs she gives to your team in her costumed version are undispellable at least. So there´s that.

I didn’t mean she’s bad. Just that probably better in offense than defence. I’m sure there are situations where she shines. I plan on working on her someday.

Enjoy! All ok - I have no regrets, she´s in my mono Dark team still - and some tournament teams

That being said, I´m sure Amoenna has her moments

I would love to have her costume for 4* buff booster tourneys. She gives two undispellable buffs, one is a hot, and can’t take damage for 4 turns? Sounds fantastic!

She´s still all I have, when it comes to fast Dark Heroes.

I´m trying to make the best of her, but I often find myself taking Sabina or Rigard instead, because I need dispell or cleanse. That being said, I´m sure Amoenna has her moments. It just often seems to hinder my gameplay with the other heroes needed, but it´s probably because I haven´t got any Dark Snipers etc. either.

I would like to get her costume. I’ve used her original form in wars and it comes in handy when she’s the last one standing and you fire her and watch the defenders miss with their specials.
But when it comes to healing, as you mention, Sabina or Rigard are more useful because of the cleanse or dispel. But if neither are required, I suspect Ameonna costume is useful. I still use her normal version in my titan team and if you are going mono, I imagine the purple tile damage can be impressive once you fire her. Keep in mind that there is a good chance that the defenders attack her when she is ghosted.