This thread is for discussing strategy related to Costumed Ursena, as well as your thoughts on him. 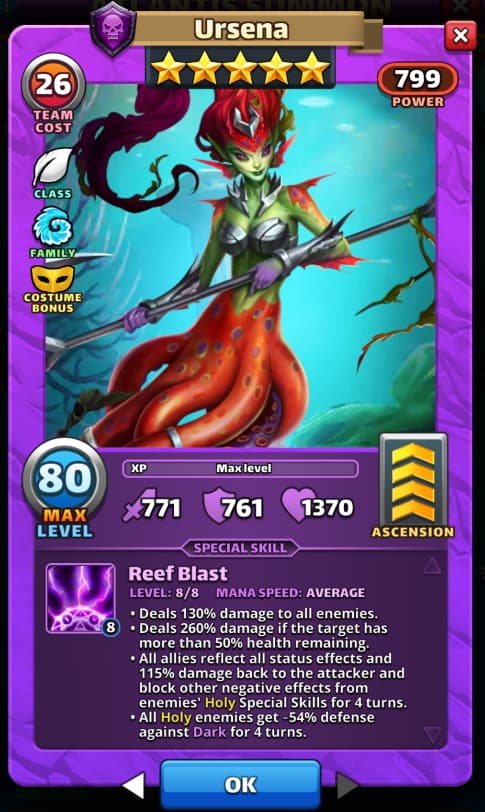 There appear to be no changes to Costumed Ursena from last-seen Beta stats, skill, and design.

What do you think of Costumed Ursena ?

This thread is for thoughts and discussion on Costumed Ursena.

Based on preferences Forum members have expressed, please try to stick mainly to Costumed Ursena and not wander off topic too much to other heroes.

Is Costumed Ursena worth Summoning For?

How many copies of Costumed Ursena would be useful to keep & Level?
Note - this is roster space dependent & isn’t the same for everyone!

What do you think Costumed Ursena’s Primary Purpose is?

What do you think of Costumed Ursena compared to other Heroes?

Is Costumed Ursena worth giving Sorcerer Emblems to the original hero ?

What do you think which version of Ursena is better ?

In Defence, where do you think Costumed Ursena is best used?

How do you think Costumed Ursena is best used?

Thanks for your time @PlayForFun. The first survey where I am in agreement with everyone else

Underwhelming. Her only change is that she now also does defense down against dark? But after she fires, so she needs to fire again to make use of it?

Her only niche would be against titans, yellow aether bosses, or against mono yellow teams. She still has no place in defense because 260% damage doesn’t cut it these days.

This was a miss. Worst of the Atlantis costumes IMO.

This is probably my most desired of all the Atlantis costumes they’ve brought out so far. I really need a elemental def down in dark. Panther is the teltoc holdout for me an I wasn’t successful getting Sergei either. Ursena would be immediate max for me, Costume side for killing titans or in attack teams and regular side on my defence ( especially in VF where I can use her instead of Quintus as tank, plus can reset all Quintus emblems over and make her +20 straight away

Finished S2 hard today, and got her at 6th summon, preety happy here

This was a miss. Worst of the Atlantis costumes IMO.

LOL…she’s the best one IMO! I don’t have Panther though. Combined with her reflect, she’s a Titan beast! Why do people put such a heavy emphasis on if they can be on defense?

The only change her costume adds is defense down for yellow heroes only. Great for titans, almost useless for anything else. All of the other S2 heroes got a good change in their costume that makes them more useful in general. Ursena’s change is very niche, hence my comment that she is the worst of these costumes.

Byzantine, a titan hero is never niche. We do 14* every day in our alliance and rely for them for 4* mats. Also, she hits everyone at average speed which makes her very powerful and useful.

Is non-c Ursena viable on offense?
Do i understand correctly that she hits yellows for x1.4?

I don’t have her nut I believe she’s very good on offense. The reflect is great against all holy heroes.

Got her from HA10. 2 years ago I would have freaked out, today she is an average hero.

Anyone use her and her costume ?

I think I can use her at titans and in raids and Events with a lot of yellow enemies.

i have the original and still use her, she is great

the costume is good for titans if you don’t have panther, you can use her costume against titans with sergei.

I get that her elemental defense down isn’t as good as G Panther because it is limited to holy enemies but that certainly does not justify the unhappiness.

If when attacking you can bring Costumed version if opponent is especially heavy on holy heroes that do no damage like C-Vivica, adds flexibility without making her universally perfect.

Big yes, great for Titans and a little extra usefulness in other arenas.

SG’s creative department didn’t strain themselves too badly but the result is satisfying.

Also as war tank, raid defense tank or if you wish to go double black flank, so enemy is inclined to bring yellow.

I have panthers costume. I have two actually. The first one is ran on offense and paired with killhare. Launch panther c then killhare and everyone dies. The fact panther is fast and killhare is average makes the pair that much more effective due to timing of panther going off first.

I am leveling my 2nd costume panther now and dont have another killhare so im leveling ursenas costume to run with panther c. The pair will be another massive 1-2 knockout punch that i will use in almost every war and on many raids. So long as an enemy isnt below 50% health(horrible idea btw)

If not for panther costume i would see no use at all for ursenas costume or ursena at all. Shes just completely underwhelming except against yellow titans.

You can play Ursena as a one punch dark hero in any setup to completely shut down enemy yellow(s).

Or any yellow mobs on challenge events for extra dmg