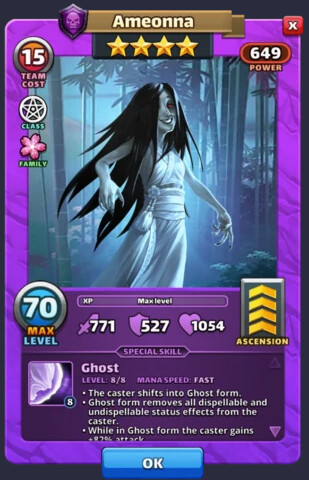 What do you think of Ameonna ?

This thread is for thoughts and discussion on Ameonna.

Based on preferences Forum members have expressed, please try to stick mainly to Ameonna and not wander off topic too much to other heroes.

*NOTE: Summon Results posted without any commentary/feedback at all should be flagged as Off Topic and removed, based on preferences expressed by the Forum community. Please include some comments about what you think of Ameonna when posting Summon Results. In addition to opinions about Ameonna, you are also encouraged to include how many Summons it took before receiving Ameonna (or how many Summons you’ve done without receiving Ameonna), so other players are presented with realistic experiences of the rarity of Epic Event Hero.

Is Ameonna worth Summoning For?

How many copies of Ameonna would be useful to keep & Level?

What do you think Ameonna’s Primary Purpose is?

What do you think of Ameonna compared to other Heroes?

How does Ameonna’s Special Skill and Intended Purpose match his Base Stats?

Is Ameonna worth giving Sorcerer Emblems to?

In Defence, where do you think Ameonna is best used?

How do you think Ameonna is best used?

If you would emblem Ameonna then which Emblem Path would you select ?

This was SG’s first attempt at ghost-type specials. She is one of only 2 4’s I pulled from Atlantis even though I beat all stages on all difficulties.

As always, before your deep on a bench she can be a good bench player. Her main benefit is his A value which, fortunately, you gain the benefit of even if (when) she dies. That makes her particularly suited to titan teams. She was in mine for a long time.

I had mine emblemed to +18 at one point as a pseudo titan specialist. For a long time she had the highest A value of any maxed 4* without emblems. I don’t know that that is still true, but I suspect not. Scarlett passed her on emblems because rogue has more A nodes than sorcerer.

She can service as a titan team player and could be worth maxing for that as 4* are fast and cheap. Sorcerer emblems can be freely used when first starting. Her main competition would be Sabina and Skittleskull. Sabina should probably go first, but I can see scenarios she should take priority over Skittleskull. Depends on the roster.

She certainly is relegated to niche uses, but is far from useless. One copy is likely enough though.

I had mine emblemed to +18 at one point as a pseudo titan specialist.

I still use my Ameonna in my titan team. I really don’t have anything better and her attack is really high. I can’t remember if used her anywhere else. I’m curious about her costume.

I have heard some people see ghost form as like a 20% dodge on your team, assuming all 5 heroes are still alive, because any attack on her does nothing.

While true, that always seemed like a bit of a stretch to me as a benefit to “plan for” rather than a coincidence that happens some times.

Her costume will be a superstar in 4* tourneys, especialli in the buff booster. She’s fast and she gives her allies the defense buffs and HoTs. The defsense buffs and HoTs must be undispellable if her skill is similar with Lughaidh of S4 5*, I guess.

Got two maxed one still +18 that attack is high for a 4* in ghost mode…
She helped me in raids early on as alot of teams had snipers back in the day… with ghost as @Muchacho mentioned can waste a special on yah.
Also in trials helped me clear the final stages, i found a use for her now there many other 4* dark that are out there …

Where she shines …She is great on titans with the attack in ghost sure it tile dependent …i may max a third for MT if i get another one as can keep in ghost as use scrols of alteration mega damge .

I got her last time Atlantis Rises was active, and I am honestly considering LBing her and maxing her out, though I lack the emblems to do so. Not sure where they have gone off to. I´m so desperate to get a Dark hero that is fast. I keep loosing matches vs. yellow tanks, because my Dark Heroes are all average or below that in speed. Highly frustrating.