This thread is for discussing strategy related to Scoratek, as well as your thoughts on him. 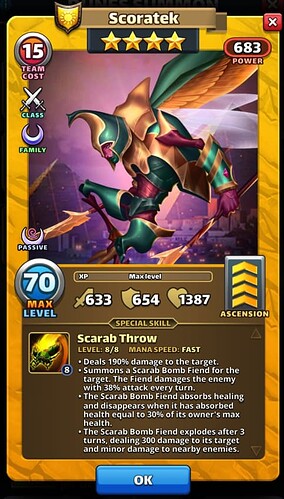 What do you think of Scoratek ?

This thread is for thoughts and discussion on Scoratek.

Based on preferences Forum members have expressed, please try to stick mainly to Scoratek and not wander off topic too much to other heroes.

*NOTE: Summon Results posted without any commentary/feedback at all should be flagged as Off Topic and removed, based on preferences expressed by the Forum community. Please include some comments about what you think of Scoratek when posting Summon Results. In addition to opinions about Scoratek, you are also encouraged to include how many Summons it took before receiving Scoratek (or how many Summons you’ve done without receiving Scoratek), so other players are presented with realistic experiences of the rarity of Epic Event Hero.

Is Scoratek worth Summoning For?

How many copies of Scoratek would be useful to keep & Level?

What do you think Scoratek’s Primary Purpose is?

What do you think of Scoratek compared to other Heroes?

How does Scoratek’s Special Skill and Intended Purpose match his Base Stats?

Is Scoratek worth giving Fighter Emblems to?

In Defence, where do you think Scoratek is best used?

How do you think Scoratek is best used?

What do you think is Scoratek worth Limit Breaking ?

If you would emblem Scoratek then which Emblem Path would you select ?

Ability: Effects on Special Skill
70% chance to perform the following actions when this character casts their Special Skill

I like this most, and it isn’t his main special. Mana slow at Fast mana? Yes please. Yep, I understand it is a 70% chance but ALL enemies!
Bonus is that he does damage to one and delayed damage to up to three.

I’m assuming the fiend doesn’t explode when the enemy is defeated, since the wording is different from Jack’s

Yes, as this is not an ailment it should be good for War Equaliser

He was the only 4* of the S5 heroes I pulled and also my very first fiend hero (well, I’ve had way too many Vollermorks). But only because of the passives I think he might be okay, won’t rush levelling him though. Unless I happen to see him in action, but fighter emblems are hard to come by, so not super excited.

For me, monk and druid emblems are hardest to come by. Ranger also.

I have two of him, but not done anything with him yet.
Is it worth the mats to level both?
I have lots of yellow 4* heroes

I have 3 and will max at least 1 and maybe even 2. The important skill is the passive which gives 50% chance of -24% mana generation to all. At fast speed, he fits well with Mist, Jackal, and Griffin.

Yeah, he looked really underwhelming to me when I first saw him. Something like a better Carroll but then I saw his passive and it kinda intrigued me to maybe level him one day. I have so many unfinished 4* I need to do before him. Mist, Woolerton, Wren, Merlin, Peters and quite a few 3* as well

Yet another one of these delayed bomb heroes that nobody ever liked or uses. If they’re going to keep making these crappy heroes why don’t they make one that actually excites us? The initial damage is not enough at all and the fact that it’s a fiend doesn’t really even help it at all when the heroes base damage is that low. It doesn’t even blow up if you kill the target like Jack’s and Carol’s bombs do, come on.

It’s a delayed bomb, but that bomb is a fiend. Much better than Carol or Jack, because it eats up any healing. Not the greatest, but it helps too kill your opponent.

I agree, he’s crappy but his passive is intriguing and the only good thing about him. 50% chance is pretty low, though

Experimental. If he works out they’ll bring out a legendary next, with proper fiendish fiends.

Does it still explode then? Or is the fiend just gone after healing? Because then they would be useless except in bloody tornaments. 30% healing happens quite fast in fast mana tournaments.
Gullinbursti his damage is done even if he is killed or if he is de-buffed. But as I read it, this is not the case here.

If the Fiend removed by healing or by Esme or other Fiend remover heroes, then it does not explode.

That’s unfortunate… and sucks! Then basically, this hero is only of use in bloody tournaments and in attack, if you can time his special.