From that point it is set to recur every 4 weeks, based on this thread: Event Cadence Update & Calendar of Events for April 2022

These are special items, which you can get during your progress in Season V map and they can help you during you further progress. You can read more here:

If you have any questions, please submit them below. 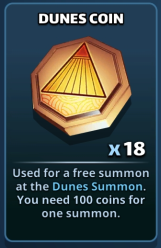 The first time a Stage is completed, a reward is given in Dunes Coins — which are just like Atlantis/ Valhalla/Underwild Coins, but for Season 5.

In Season 5 there are Stage Properties which applies to every second stage in Season 5 Map (so far).*

All enemies has got various passive abilities, which is specific to that enemy, and on a Stage or even a Wave there can be different enemies, which has got different passives.
The stage status effects are given every 5 turns to your heroes.

Stage effects are just like normal Status Effects which are mosly dispellable or cleansab;e. So they can be blocked by an Ailment Blocker (e.g. Grazul, Garnet or Vanda) and can be dispensed of by a cleanser (e.g. Rigard or Ariel).

There are two different families: Sun and Moon.
I have added the indication of the familiy to the hero topics titles too.

Is “Dynasty of Dunes” the official SGG name for season 5? When you enter the map you get a blurb about Kemyth, the Dominion of Eternal Dunes. Just wondering.

One of the people in my alliance can’t access Season 5.

They’ve told us they haven’t even started Season 4 (we were shocked, he’s level 85).

Does anybody know if that’s the reason why? Do they need to finish Season 4 on normal before Season 5 opens up for them?

Season 5 will unlock once players will reach Season 4 Province 5, SG announced in the sneak peak 2022.

Thanks for the info!!

These heroes look so goood ahhhh. I want those birds!

As I recall you need to reach Season 4 province 5 in order to unlock Season 5.

Thanks for your answer.

This is my first month with the season five map unlocked… Is there no discount during the Dynasty of Dunes event like there is for Valhalla/Atlantis/Underwild? Or is there a glitch today?

Discounts are only after the season is finished and there is a monthly recurring of past seasons.

Aha! So basically there’s no incentive to play Season 5 during the event unless you are in the mood? No special enemies that drop extra coins either, it seems? The only highlight is the portal being open?

Yes, it is how it works. Also, SG unlocks only 3 provinces at once, but as you just started you probably will not reach the end of the current unlocked provinces (Province 18).

Thank you, love the heroes, but I get so many Dune tokens from other parts of the game… and as a beginner, my WE maximum is so low… I’ll probably just play when I have extra WE to burn off after completing all the special quests/monster chests/etc.