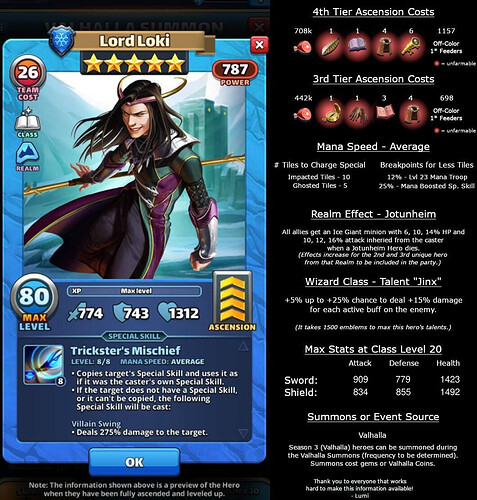 There appear to be no changes to Lord Loki from the last-seen Beta stats, skill, and design.

What do you think of Lord Loki?

This thread is for thoughts and discussion on Lord Loki.

Based on preferences Forum members have expressed, please try to stick mainly to Lord Loki and not wander off topic too much to other heroes.

*NOTE: Summon Results posted without any commentary/feedback at all should be flagged as Off Topic and removed, based on preferences expressed by the Forum community. Please include some comments about what you think of Lord Loki when posting Summon Results. In addition to opinions about Lord Loki, you are also encouraged to include how many Summons it took before receiving Lord Loki (or how many Summons you’ve done without receiving Lord Loki), so other players are presented with realistic experiences of the rarity of Season 3 Heroes.

Is Lord Loki worth Summoning For?

How many copies of Lord Loki would be useful to keep & Level?

What do you think of Lord Loki compared to other Heroes?

How does Lord Loki’s Special Skill and Intended Purpose match his Base Stats?

Is Lord Loki worth giving Wizard Emblems to?

In Defence, where do you think Lord Loki is best used?

How do you think Lord Loki is best used?

Owned both Lokis! At least I won’t feel bad not getting krampus now

He is basically Rumpelstiltskin 2.0 on defence because you don’t know what you’re casting. I can imagine a luck based team; him, rumplestiltskin and the new hotm malicna. All their skills randomised and heavy luck based

How does his special work?

You can select which special to copy but you can’t select the target to attack, is the casting random?

Unusable on defense, can be good on offense

It uses the skill on the target.

So if Lord Loki targets Lianna, he will copy Lianna’s skill & use it on Lianna.

If Lord Loki targets Isarnia, he will copy Isarnia’s skill but obviously the cast will be on all enemies.

A little bit of showcase of our forever favourite!

At first I thought the copying of skills is permanent, little bit of a bummer. But if it’s permanent he’s a little too OP I guess. He can’t really copy the skills of a sniper and then use it against anybody. So he can really only be used against aoe enemies and support enemies. Yes…I’m basically owning a black Knight on my team already

He is very good against slow AoE and slow healers like Kunchen.
And can replace healer in war (if opposing team have a healer).

His presence alone adds pressure on Def. Because you don’t know what skill he’s using. Rumple is said to be already terrifying to face on Def, imagine lord loki…

I thought featured heroes get higher chances of pulling… 0.3%? Come on

how does he copy ninjas?
my guess is always charge 1?
and obviously how would he copy himself XD? the same swing attack?

and against red titan, how would it be like? will he do the same burn or will it scale down to his attack stat?

One of best hero concepts in game. Definitely going to be fun to play.

Too bad I will probably never pull him and I don’t expect to face him on defense, so he might as well not exist

He is a deterant against slow powerful specials than.

But i think he might be to niche to be reliable.
the more heros die, the less choices he has to target

Not being able to target the hit him situational.

e. g. vs Hit 3 heros in the corner he wastes the special

Yup, there’s definitely downsides to him, I agree. But that doesn’t change what I said about him being fun to play.

I was trying to pull Drake Fong for years now and nada. Only got my butt kicked by hundreds of Drakes through the game. With Loki I could feed Drake his own medicine whenever I damn want. Same for Finleys, Friggs, Ursenas, White Rabbits and all the other monsters. Yea, he will be most effective against Owls and Alfrikes. But satisfying - I guess most of the time. I have Mitsuko, I have Lady Loki - seeing enemy die eating their own **** is almost like poetry.

he is not worth to chase. niche and useful at ofense. frigg is far better

Well, I think he can be really fun and useful in offense. His ability to copy slow and average skills from powerful heroes will be nice, I guess. That’s unique, and I love it.

On the otherside he will age well. Because the more heros are released the more good heros he can copy.

I see he has a decent attack stat which makes him a good damage dealer. Does he copy elemental links (also from other colors)?