This thread is for discussing whether Klaern is well-balanced, or whether you think he needs a buff or nerf.

This thread is NOT for general discussion of Strategy or Summons related to Klaern. For that, please see: Klaern – 5* Ice / Blue - July 2022 HOTM (Hero of the Month) -- Initial Release

In short, to neaten the forum and to give players and outlet for their thoughts on his balance without bogging down the rest of the forum or the other Klaern thread.

To be honest, he has a great passive but his main attack is weak. I mean, he is slow hero. Why did you not make him hit all with 300%. G. Kong who is averagw, even Lewena who is fast make more attack then him. I would suggest you to make him hit 300% all. Water damage is to low also. Make it at least 350 in 5 turns. He can be very good hero but really need a good buff

I think buffing this hero would take a complete overhaul of the hero. I honestly don’t know what to suggest outside of that. I would level and use Rueben, Quintus and Zulag before I even considered this guy in his current state.

To be fair, the only minor issue with Klaern is that he doesn’t have a special skill. It’s not as if it were some kind of big deal.

Klaern, the Mercyful, he will aways let the enemy have some more turns to win

Keep everything else the same.

He needs to deal more dmg, that’s it.

The 25% healing of DoT dealt effect is unique, and for being this unique I really do not think it is meant to be this garbage.

I think the intention of the design for him was dealing 200 DoT per turn, for 5 turns. And healing 25% of dmg dealt on top of it. Then we could consider it a balanced hero for slow speed (my average Rayne deals almost 400 dmg per turn if anyone thinks 200 is too much).

Dealing 200 divided for 5 turns is plain idiotic. It would be bad on a fast hero (even Vela’s DoT per turn is currently higher); on slow hero it just seems to be a bug.

Klearn, the bather of foes.

This hero it’s really awful, his special it’s for very fast speed but they decide to make him slow.

It makes me sad that summoning a rare thing such as a five star hero can result in frustration.

Just because it’s so poorly designed. It was voiced so many times over and over in the past weeks. Nothing changed.

Other heroes exist, such as Exeera (spelling…), and that blue fiend removal healer from Clash. Both relatively new heroes. Yet so underwhelming, that getting them results on such annoyance of ‘wasted’ luck.

If the developers behind this game would bother to talk with their customers instead of to them, it might be a different story and much easier to accept.

Hi! My name is Gwniver. Until just a few moments ago it’s been ‘insert random amount of days here’ - days since my last negative post. (Hiiiii Gwniver). At least it isn’t a PoV criteria.

He need buff… make him fast maybe? Or average + dispell all before hit
He is weak as S1 azlar…

If i get him… He will go on the soul exchange pile… Which means he has 9 months to get a decent buff before he is recycled.

I can’t get over the fact that they coded a brand new signature ailment for him, it’s such a waste of an ailment.
To buff him and not completely overhaul him, make his water damage stackable with other normal water DOT.

Before official release, people already told this guy had bad stats, but finally they still keep it. I cannot recall any HOTM got buff after released, so if he is useless, then he can become food in Soul Exchange. Only buffs for new event heroes are considered even when it is not needed, sadly!

I cannot recall any HOTM got buff after released

Lots of HOTMs have been buffed post release. But generally not for quite some time after release (span of a year or years)

At least he had become my forum avatar…

Together with Horghall, the worst lucky pull ever for eternity!

I agree. A flat increase to damage or water damage could make him usable, but I don’t think it would make him interesting.

If he ever gets a costume, I hope it juices his healing capabilities and spreads it to his whole team, or at least his neighbors.

It reminds me of Oliver Twist: 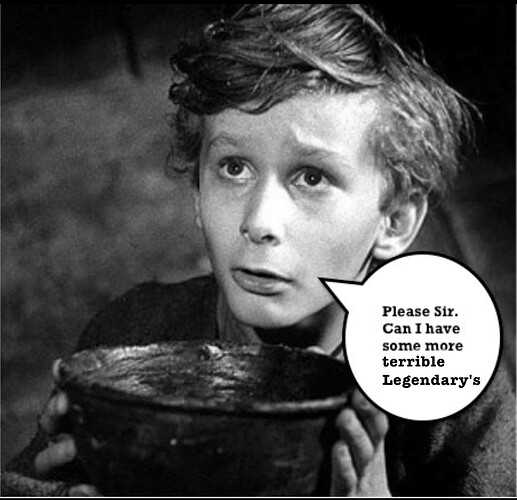 But I am envious of that avatar!
Well done Slobix and…
better luck next time

How much more buff can this Klaern guy get? His pecs are looking mighty immaculate, like one of those Korean boy toys. Any more muscle on his pecs and SG will have to censor it.