This thread is for discussing strategy related to Costumed Drake Fong, as well as your thoughts on him. 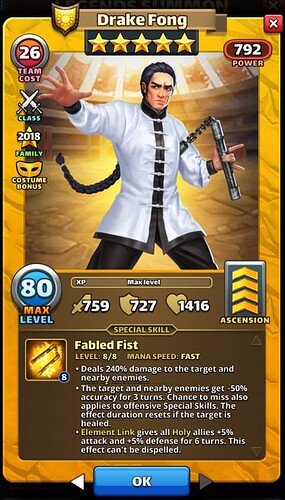 Beta Information: 🧪 Early Information on ROUND 1 of HoTM Costumes (Round 6 of costumes in general) [Part of The Beta Beat v42]

What do you think of Costumed Drake Fong ?

This thread is for thoughts and discussion on Costumed Drake Fong.

Based on preferences Forum members have expressed, please try to stick mainly to Costumed Drake Fong and not wander off topic too much to other heroes.

Is Costumed Drake Fong worth Summoning For?

How many copies of Costumed Drake Fong would be useful to keep & Level?
Note - this is roster space dependent & isn’t the same for everyone!

What do you think Costumed Drake Fong’s Primary Purpose is?

What do you think of Costumed Drake Fong compared to other Heroes?

What do you think which version of Drake Fong is better ?

Is Costumed Drake Fong worth giving Monk Emblems to the original hero ?

In Defence, where do you think Costumed Drake Fong is best used?

How do you think Costumed Drake Fong is best used?

HeroPlan.io - Tool for tracking your profile's progress, sharing it & to Plan your Hero Use for Class Trials, Challenge Events, Wars, Tavern of Legends Titans AND MORE!
Standyourground December 21, 2021, 11:50pm #3

I wish his damage was 250 instead of 240. Im not sold that his costume is better than regular because of this. The blind is much better obviously, and the fighter class is great, but when it comes to PVP play, the hit of 270 from the original version hits pretty decent. Enough to kill or almost kill a hero or 2. So the question is if the lower hit is offset enough by the increased blind and change to fighter class. Might be, but I am not sure.

I think the costume will be the superior defense team version whereas the regular outfit might be better suited for attack teams.

I would have preferred something new and cool, like:

Also if you compare original to costume then attack is beefed up so the damage difference is even less.

These costumes other than S1 heros is a slap on player base. The greed of SG speaks hear higher than anywhere else in all aspects of the game.

For those non S1 costumes.

Can you explain why? It gives some old heroes “new life” and also makes them better. You didn’t receive S1 costumes for free, you also had to pull them. There is no difference. I like this move and it also helps during Towers as you can use the second version of the hero separately.

Can you explain why? It gives some old heroes “new life” and also makes them better.

This explanation would make sense but only if pulling these costumes wasn’t at the same shi**y odds as pulling brand new OP heroes.

Costumed old HotM is still worse than new Penolites and Ludwigs. Yet cost of pulling one is literally the same. There’s no features like grinding for costumes which player base was asking for, there are no improved odds of pulling one if you already have the hero. If there were such things in place, I wouldn’t be so against these costumes. Still hoping that SG will deliver on that space. For now the only advantage for pulling at costumes vs new portals you get is if you already that old HotM and benched them, you do not need epic ascension mats to max them.

I did the math, the costume version attack stat is only 10 points higher than regular (with costume bonus also). I am not sure on how much difference that makes by the end of calculations as far as the difference between 240 and 270, but it surely seems significant. A kill is always better than even the best ailment. That being said, like I said originally, maybe the increased blind and better class (fighter) does make C-Drake edge out regular, but if so, cant be by much.
Edit After thinking about it more, I do agree the costume is probably better, but I still dont think it is by much.

A) would you guys take the mana node on whichever version (costume or non costume) you chose?

B) What troop would you pair him with, Crit, Ninja or mana (if the latter what level?)

If you have a mana troop to get the tile drop, then I’d go mana. I’d prefer not to use the emblem node if I don’t have to. And of course it depends on if someone else could use the mana troop.

Hey everyone! I initially developed this just for my alliance, but I think it might be helpful for everyone. I made a chart showing the useful mana bonus percentages for every mana speed! The mana bonuses shown will decrease the number of tiles it takes to charge hero special abilities. There are different percentages that are useful for offense and defense. [Optimal%20Mana%20Bonus] Update – a new mana speed has been added to the game since this chart was made: Charge. This speed is exclusi…

I see Drake Fong even less than Gravemaker on defenses. Is it because both of these have the tiny buff (element link) that El Naddaya attackers can punish? That needs to be sorted out.

Many of these heroes come with better stats, better family bonus, better passives. Blind isn’t the concern it once was.

Those who don’t spend have pretty low chance of having C.DF. Those who do spend, can spend for a better option. I think he’s a solid defensive option, but there are better ones.

Everyone in your list I don’t have, so would it still be worth using costume Drake Fong over the likes of costume Rana who I also have?

Or should I save the ascension materials? Rana is already maxed out.

My tank is Xenophlod. Have El Naddaya, Blue Rabbit costume and Asterius in my defense also.

I use Drake. While I have a number of yellows, the only real alternate I have is Onatel, but Drake is in the same family as Zimkitha, so I pair the two of them, meaning that everyone gets his elemental link.

Of course, I’ve got a fairly shallow pool and don’t have your heroes.

Thanks. Rana doesn’t have an elemental link so I think I’ll stick with her and save my ascension materials. Really don’t like giving away free damage to El Naddaya attackers for such a minor buff.

Really don’t like giving away free damage to El Naddaya attackers for such a minor buff.

Fair enough. I just figure I can’t control what attackers bring, so I don’t over think it. Of course, I don’t have anywhere close to the meta defense team so it’s not really much of a decision.

Edit: Just out of curiosity, do you see a lot of El Naddaya in your watchtower when it comes to attackers?