This thread is for discussing strategy related to Cillian, as well as your thoughts on him. 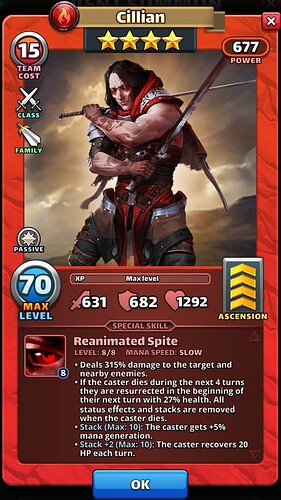 The new heroes form the “Slayers” family and have a family bonus for each unique hero in the team:
The amounts and percents in Family bonus varies for each rarity.

You do not need to cast the special skill for the family bonus to activate.

What do you think of Cillian ?

This thread is for thoughts and discussion on Cillian.

Based on preferences Forum members have expressed, please try to stick mainly to Cillian and not wander off topic too much to other heroes.

*NOTE: Summon Results posted without any commentary/feedback at all should be flagged as Off Topic and removed, based on preferences expressed by the Forum community. Please include some comments about what you think of Cillian when posting Summon Results. In addition to opinions about Cillian, you are also encouraged to include how many Summons it took before receiving Cillian (or how many Summons you’ve done without receiving Cillian ), so other players are presented with realistic experiences of the rarity of Event Epic heroes.

Is Cillian worth Summoning For?

How many copies of Cillian would be useful to keep & Level?

What do you think Cillian’s Primary Purpose is?

What do you think of Cillian compared to other Heroes?

How does Cillian’s Special Skill and Intended Purpose match his Base Stats?

Is Cillian worth giving Fighter Emblems to?

In Defence, where do you think Cillian is best used?

How do you think Cillian is best used?

Pulled him and tested him in S1 8.7. He is great, from one perspective even better than Tyr because he hits 3 with 315%. The revival is the same and he gets continous healing every turn from stacks. One thing to remember is that when he revives, the stacks reset and they start from 0 again

Maybe not in everyday pvp, but for rush format this guy will be just as annoying as Tyr but even more dangerous. 315% to 3 is the second highest in the game after Khagan (Marcel got dethroneed), and you better have a dispeller ready otherwise he’s gonna keep coming back again and again.

I think Gullinbursti-Cillian-Brynhild will be staples in my teams

I fully leveled him for the buff booster tournament. After seeing how well he was doing I gave him spare emblems up to +11. He’s been going strong, hasn’t died yet. Here are today battles if anyone is interested. 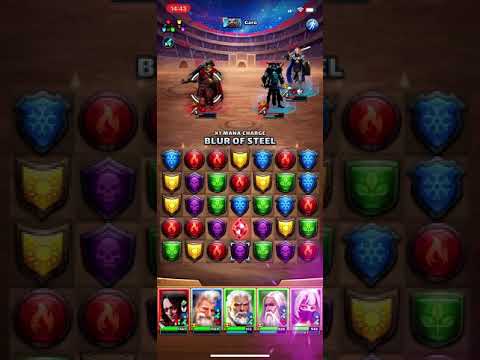 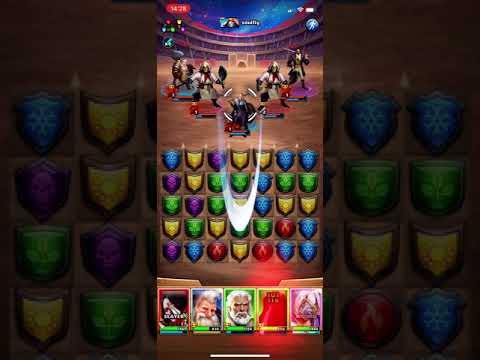 Do the stacks for Cillian count as individual buffs in buff booster?

Yes they count as individual buffs

Oh now I got it, thx, its just faster stacked. 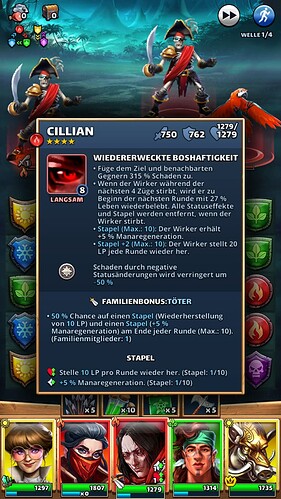 Hmm just tested, this does not seem to be true. First stack, just one 10HP. Seven stack is 70HP, also 6 or any other number I get, this would not work if it is always +20, right 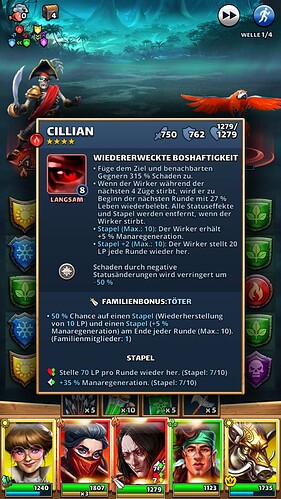 Again, my fault, didn’t fire the special, this stack is his passive. Now I really got it

The way it’s worded it’s very confusing, and it’s not just him.

The second stack is not only confusing because of the unclear “stack +2” but also because it states that whatever the “stack +2” is, each one of them recovers 20 HP each turn and you get up to 10 of those stacks.

Looking at reality, the second stack should clearly read “recovers 10 HP” and then let us figure out that +2 means you get an extra stack each time the special is fired, or the entire thing could be rephrased to:

I took a chance on him basing it off his stats when maxed. Then looked up his stats at +20 focusing on life and defense. Chose that path over attack to keep him alive longer…then limit broke…was not disappointed! 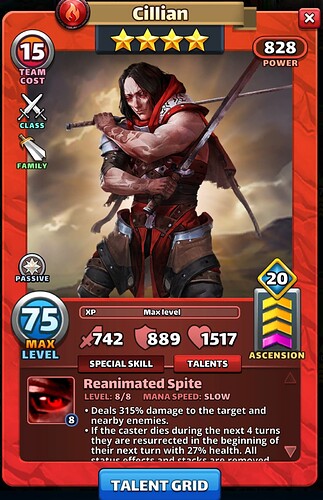 I just put limit breaker on him, really like what I’m seeing, think going to use him to replace Sumie on event team

Left…mana boost to make him just a smidge faster