Those stages which grants you new Amulets or increases your open Amulet Slot spot are marked with a special icon.
Those stages which are unlocking a new Amulet or an Amulet slot spot can not be replayed for the first time as after the Rewards screen is closed a new screen is opened, where you are notified about what have you unlocked.
The title of this screen is: New Amulets Unlocked or New Amulet Slot unlocked (or both under each other.)
And you can see the unlocked items icon, name and description here.

These Amulets are granted for you free once you completing specific Provincies.

There is a quick tutorial shown to you about Amulets after finishing Province 1 for the first time.

The Amulets are stoted in a special inventory, which is accessable from the Season V map: 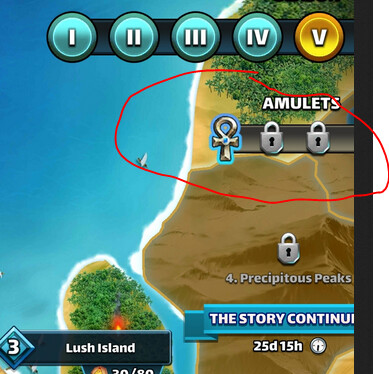 You can also see your currently selected Amulets and the available slot count on there too.

If you want, then you Battle without any Amulets. In order to do it you need to unequip all Amulets.

Before you enter a Season V Battle between your heroes and the battle items, you can see a small Amulet panel too, where you also access the Amulet Inventory Screen to change/equip Amulets if you want.

There are some special missions tied to Amulets, which you can read about here:

Checking selected Amulets during the battles

During the fight you can very which Amulet(s) are using by clicking on the Amulet related icon on the left.

If you click on it, then this message is shown:

There will be 9 types (based on the sized of the Amulet Inventory), but so far only 4 of them are arrived to Beta.

There maximum number of open Amulet slots is 3, and slots are unlocked during you progress on the Season V Map stages.

got my first amulet… it’s a nice buff to have!

so far, the province 2 enemies are easy enough… let’s see how I feel when we get to the later provinces

Are amulets permanent or do we need to get more?

Yes, once they are get it, then you will have them forever.

There will be 9 Amulets in total.

You will just be able to select which one (or later two or three) do you want to bring with yourself to the Season V map stages.

Sadly they seem limited to Season 5

I was hoping you could use them anywhere…

Are they limited to how many times you can use them?

No, there is no limit on usage of them

If there is no free slot, and you want to select another one instead of it, then need to unequip one first by click on the Amulet you want to unequip

Took me a few clicks to figure this out, especially with my fat fingers and the tiny amulets.

FYI, the Was Scepter is great for v.fast/fast heroes that hit multiple monsters. It’s made Gravemaker and Hannah, for example, hit like trucks.

The biggest improvement I’ve seen is to Baldur, though. The extra 80% appears to be applied every time Unbreakable Brawler triggers between turns.

yeam, am really loving the Scepter as well. My Lepus just one-shot the boss on 1-1 Normal, doing 2282 damage to that hippo.

Hi @PlayForFun @Petri , I wonder if this is an error. The amulet I received was Tjet for completing province 4 normal, but the next mission unlocked is for Udjat Eye… 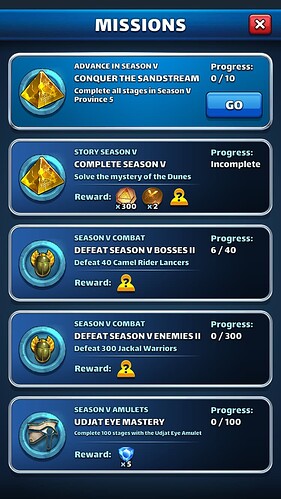 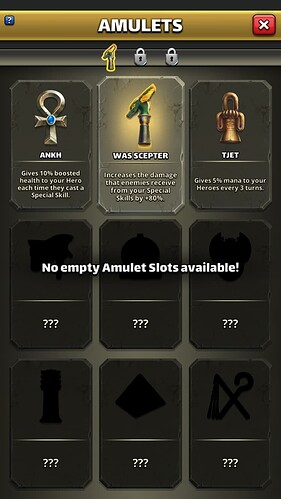 I have sent a message to Staff about this question.

Staff is checking it.

This bug is reported here:

thank you for your update!

The real sad thing for this Season is that the strong passives and the amulets seem like such a nice addition to make the game fun and interesting again, however, the difficulty level and the winning conditions still weren’t adjusted any tiny bit. So I can just ignore the passives, ignore the amulets, bring my uber-durable team and still win everything on autoplay

Like special tiles on Season 4, this feels like such a wasted opportunity for something that could be interesting and engaging.

Has this now been fixed?
My Mission now says Tjet.

Ok now it says Udjat in the Title but Tjet in the description.
However it did count the level I just completed using the Tjet Amulet 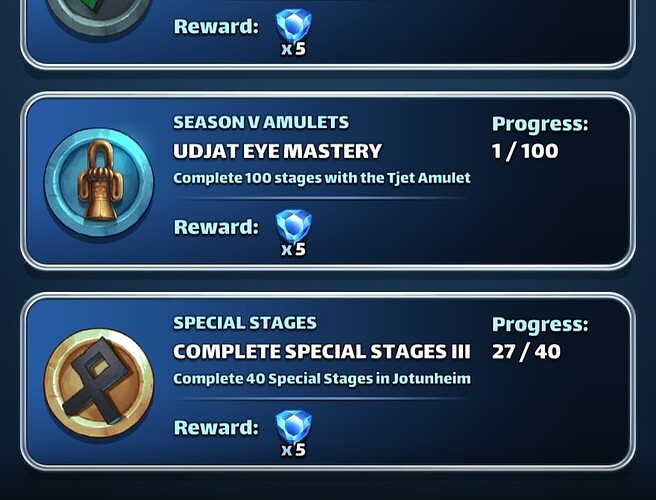 Yes, it is fixed by Staff:

The order has been fixed now and should be live in the game. I’ll mark this topic as solved.

it’s nice turning things back on the enemy!

I literally see no reason to use other amulet, it’s so powerful!

Agree @CL_Fire , it really makes things so much easier!