I ground out acolytes on 17-2 using autoplay with shen and was scepter. I found I finished acolytes with 15 amulet still reqd so going to do 5 more, leave the next 10 for 19N when it opens then farm elsewhere

I finished the Scarab amulet mission yesterday, and am really happy - now I can ditch the Scarab for the Was Scepter again

I find both the Shen and Was amulets quite useful, so it’ll be interesting to see which one pairs up the best with the new amulet. I used Shen with the scarab, it just generally made things easier for the farming stages. Do we know what the new one will be? is it in the beta beat somewhere?

@Sam-I-Am yup they have their own thread

Amulets The launch date for Season 5 and Amulets was 2022-04-21T06:00:00Z (UTC) Overview Unlocking Amulets Those stages which grants you new Amulets or increases your open Amulet Slot spot are marked with a special icon. Those stages which are unlocking a new Amulet or an Amulet slot spot can not be replayed for the first time as after the Rewards screen is closed a new screen is opened, where you are notified about what have you unlocked. The title of this s…

omg, the next one is even worse than the scarab! but i don’t think it will matter much as long as the enemies don’t get crazy hard.

the one after doesn’t seem so bad, except, well, you’ll be forced into rainbow for what, 175 stages? that will be… interesting, for sure. team selection will start to really matter.

Shen/Was probably the best combo, although what’s the last one? i guess we’ll find out soon enough!

Thx for the link.
I forgot to update the OP there with the V51 balance updates, which is now fixed

my pleasure @PlayForFun , you already do so much so glad it helped a bit!

@Sam-I-Am I agree, I am not so hot about an amulet that only has benefits when heroes die… as for the rainbow one, I guess I can live with it especially for autoplay purposes…

though not so hot about the riposte, especially if it does not stack with better riposte skills like Azmia’s or Ferant’s!

I agree, I am not so hot about an amulet that only has benefits when heroes die… as for the rainbow one, I guess I can live with it especially for autoplay purposes…

though not so hot about the riposte, especially if it does not stack with better riposte skills like Azmia’s or Ferant’s!

Thanks for the link … I didn’t realize we already knew the next two amulets. I guess I’ll be keeping Shen as my main constant with the second slot for whatever mission I’m on. The revive one seems a little useless, but I like the rainbow/atk up/riposte which will probably be my 2nd mainstay since I run a rainbow farm team, once I get it. That works well since we unlock the 3rd slot before the last amulet. I guess before I do the last amulet mission, I’d use the Tjet amulet for the 3rd slot in the interim as extra mana is always good.

I’d use the Tjet amulet for the 3rd slot in the interim as extra mana is always good.

yeah, my dream combo is Tjet for mana. Shen for ailment reflect, and probably Was for extra special skill damage

I think I’ll do rainbow team with Tjet, Shen and Crystal Benben.

I didn’t think i’d change from the hippo avatar for a while, but yesterday I switched to the acolyte avatar and got a couple of compliments on it. i thought about getting a background for it. the sand empire one in the shop today goes well:

almost like EnP goes to Tatooine. The yellow sunburst yesterday looked pretty good too. it matched the yellowish coloring of the avatar really well.

imo, the Dunes avatars are nicer than most of the Atlantis and Valhalla ones (with a couple notable exceptions) and pretty much all of the Underwild ones. curious to see what’s up next!

agree. Dunes was the first time I decided to change my avatar! (Corrupt Undead Maus)

Anybody know where that Green Zombie Dog
UNDEAD CORRUPT MAUS
is located in Season IV?

I want that Zombie Dog

They are located in Season V.A
You can found the list of stages here:

You can zoom in to the relevant section: 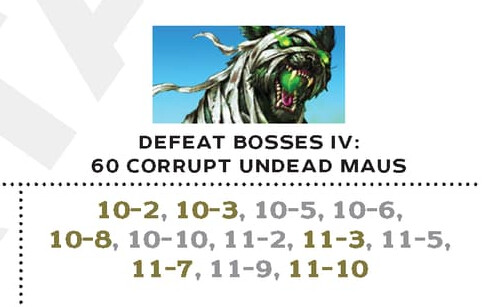 @Dudeious.Maximus should this be merged with

Wow!
Thank you very much!!! 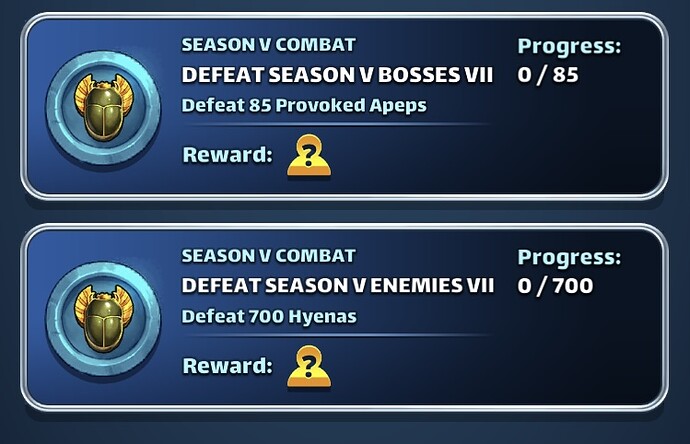