For all related links, please see the guide thread below:

Here is who I am taking into this next tournament on my main: 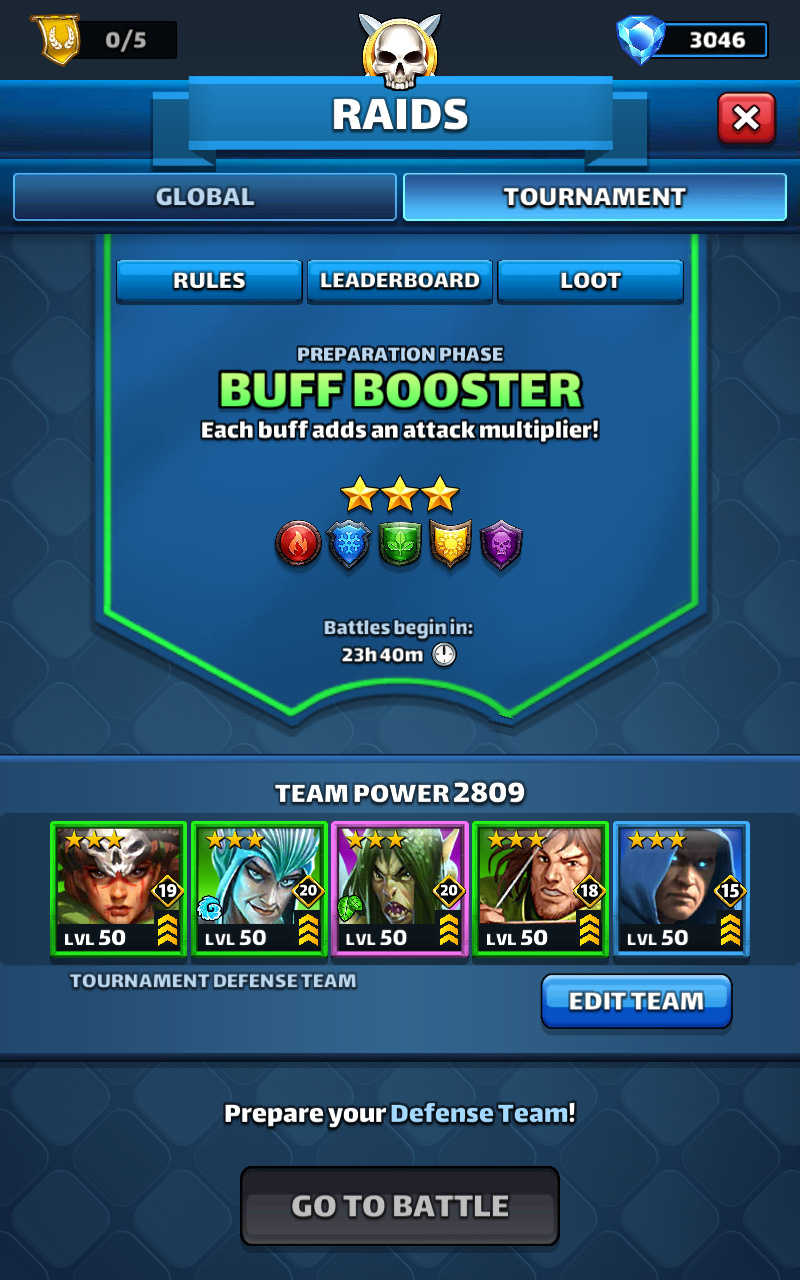 All my 3 star yellows have very little emblems or none at all. Expecting to see a lot of Briennes and Melias in this one. The protect talent on Pallys counts as a buff I am assuming?

I don’t have my Shrubbi maxed yet. But it will be interesting to see how well he does. Looking forward to seeing him in action

When it comes to Buff Booster, Gunnar is one of the best tanks IMO. I’ve had great success running him in the past.

Flanking with Melia, backed up by Mnesseus with a small defense boost. Mnesseus to dispel too since the attacker also benefits from attack boosted buffs.

This time I’ve put Chochin in place of Balthazar; I figured that having his wide area attack on flank will be valuable with the attack boosts provided to spread damage all over the enemy. Put Namahage as my other wing; he hits very hard even without a buff.

@DaveCozy I would put my Melia in but sadly she has no emblems rn. Your defense looks pretty solid. Good luck in the tournament.

@Merry_me I would think the bear would get a massive boost because of all the stuff that is active on him.

He might be great in a green stack. Him, Brienne and Mnesseus will wreck Gunnar tanks

Thanks! And btw yes, the paladin protect buff counts too

I love the 3* tournaments. Find them to be heaps of fun. My defence is below. Trying out Bauchen for the first time flanked by Gunnar and Brianne. Double Melia in the wing for the final element of Buff Boosting.

No idea how my defence will do, especially with a new tank in play.

Here what I would try to set my defense. 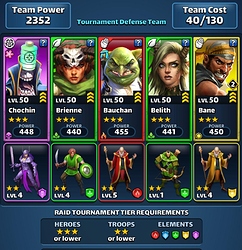 I’m also thinking of taking Gunnar as a tank. Don’t have shrubbeasr levelled. Others i have are more offense minded i think. 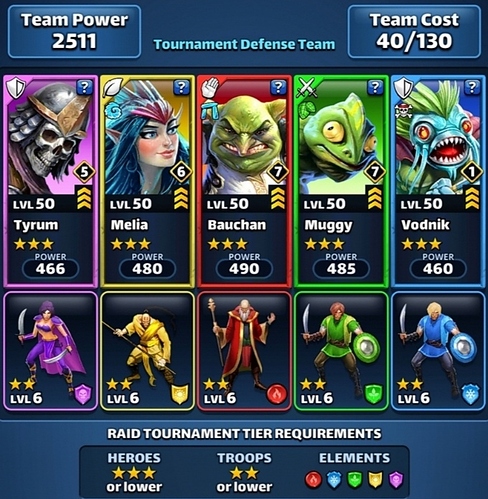 Too slow and green heavy. They’ll be almost dead, when Brienne will (if ever) cast. I’d suggest Brienne as tank with a blue flank.

Better go rainbow, even if it has less power.

I will set a grade A defense (I’m sure in proportion of 99%). Bauchan tank, flanked by two fast greens and 2 fast blues as wings. The greens will be Mnesseus and Hisan I think. Mnesseus is a must set, since my tank will attract a blue stack, therefore Gunnar. Of course, Belith may also be an option, but is average. Besides, I rarely set healers in defense at raid tournaments. And I use only these 3 colours because I wanna cancel the attacker advantage on yellow, especially. Melia is also a must have in any offensive line-up at this tournament. The main reason I don’t set any purple. I don’t set yellow either, because is the worst colour for a defense. Kailani is slow, Melia’s special is offensive.

Like I said many times before at buff boosters tournaments, it is not only about having buffs. It is more important to not let the enemy have them. This is why any defensive line-up should have a dispeller flank. And like the bloody battles, the speed is very important. Slow tanks/flanks will only result in heavy defeats. Gunnar may look good on paper, but green has 2 dispellers faster than him, so it’s hopeless. Gil-ra is a good tank, but shines only in rush attacks tournaments. At this tournament, not so good with Melia out there. Of course, no matter how we analyse, any colour has advantages and disadvantages. I always choose A > D (advantage > disadvantage). What a coincidence, because I always also choose A > D(attack > defense). “Attack is the secret of defense” - Sun Tzu. That’s why my defenses are always most fast and lethal, using healers only in AW.

Good luck everyone! Since all colours are allowed, we need a lot of it

I could set a few of the defenses in this thread, most seem pretty solid, tho sadly no Buchan to tank for me and mnesus isnt levelled yet. I’ve come up with this instead. Any reason it’s terrible? 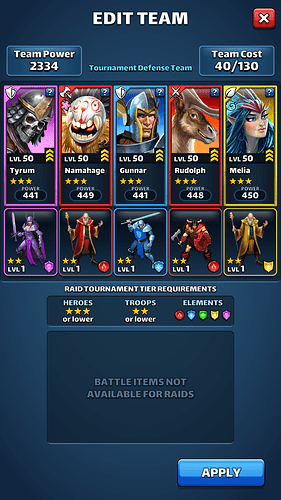 Nice argument @Scarecrow, so Belith is not best fo flank? No healer?

So based on what I have, can be like this?
Valen - Brienne - Bauchan - Mnesseus - Gato

Gato in wing is not efficience, because he can block ailment nearbly. 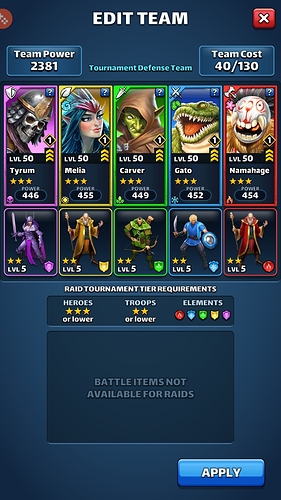 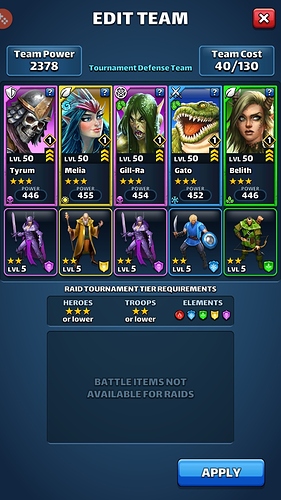 Not sure how effective Belith will be on the wing so I would go with the first.

Yeah, I use Vodnik, the best 3* wing in the game. As wing may be the only 3* hero one shot/one kill. The enemies will likely have a lot of mana when Vodnik fires.

Yeah, I use Vodnik

Well sadly I do not have Vodnik, I just doing 5xpull in pirate, the only I want is Valeria, and I get Valeria is enough for me. Next Pirate maybe he will come to my roster, I hope.

here is my current rosters: