This thread is for discussing strategy related to Grace, as well as your thoughts on Grace. 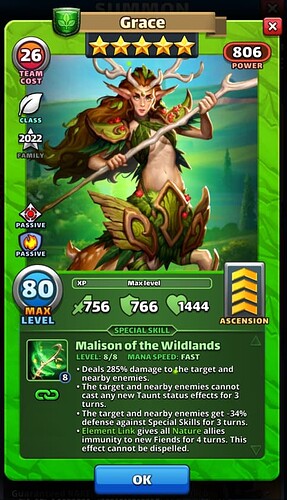 There appear to be no changes to Grace from last-seen Beta stats, skill, and design.

What do you think of Grace ?

This thread is for thoughts and discussion on Grace.

Based on preferences Forum members have expressed, please try to stick mainly to Grace and not wander off topic too much to other heroes.

*NOTE: Summon Results posted without any commentary/feedback at all should be flagged as Off Topic and removed, based on preferences expressed by the Forum community. Please include some comments about what you think of Grace when posting Summon Results. In addition to opinions about Grace, you are also encouraged to include how many Summons it took before receiving Grace (or how many Summons you’ve done without receiving Grace), so other players are presented with realistic experiences of the rarity of HOTM.

6 Likes
HeroPlan.io - Tool for tracking your profile's progress, sharing it & to Plan your Hero Use for Class Trials, Challenge Events, Wars, Tavern of Legends Titans AND MORE!
List of HOTM (Hero of the Month)
PlayForFun August 30, 2022, 6:54pm #2

Is Grace worth Summoning For?

How many copies of Grace would be useful to keep & Level?

What do you think Grace’s Primary Purpose is?

What do you think of Grace compared to other Heroes?

How does Grace’s Special Skill and Intended Purpose match Grace’s Base Stats?

Is Grace worth giving Druid Emblems to?

In Defence, where do you think Grace is best used?

How do you think Grace is best used?

What do you think is Grace worth Limit Breaking ?

If you would emblem Grace then which Emblem Path would you select ?

If I get her… Ok… But as presently constituted, she is ok… Just ok. Her special actually fights against her passive… But i get it… Though i hate that costume sabina is better as a debuff/buff preventer.

This hero isnt great compared to the OP green heroes that have been released recently, and I love how it is pretty good counter to Krampus, who was nerfed prior to releasing C-BK who is much better, and this HOTM is not an ideal counter to BK due to being green. More nonsense from SG.

Seems like a pretty good hitter for a Hotm? Can´t think of a better hit-3 Hotm anyway, definitely not in green. Plus some nice extras, so I am up for it, don´t have Quenell/Naddaha etc. She´d be top of my leveling queue for green 5 stars for sure, but I have to admit competition isn´t especially tough there…

Iris? 325% + minor to nearby + higher stats + increased dmg to fire + dispel-over-time.
for me she is at least comparable if not better. At least not limited to counter taunters, deals just as well with riposte.

Minor nearby as you said. I was talking about a stronger hit-3. Damage wise I´d say there is a lot more damage here than with Iris, but I do agree Iris extras are probably better.
Also Zagrog has a bigger hit (well and he´s only average), but it´s also minor nearby.
Now that I think of it how many other fast hit-3 Hotm are there at all?

You’re right, and even if we can disagree if she is #1 or #2, she is a really good HOTM.
And will make a good pair with Silvaria.

I thought almost the same thing. Her and Khufu will be good friends if I pull her. so far that taunt thing is the biggest hindrance I have when using him

Also, a nice pairing with Quenell. Imagine a 520% Quenell slamming down on an enemy with -34% damage from special skills. Maybe add a bit of Franz and/or Silvaria into the mix.

Devana is avg and hits much weaker, just like Elradir.
Fast Hit-3 HOTMs are:
Clarissa,
Gravemaker,
Drake Fong,
Evelyn,
Margaret,
Reuben,
Thoth-Amun
if counting “minor to nearby” we can add:
Musashi
Iris

Hear me out: if Legends 2022 is going to get the same bonus as the other HotM families next year (2+ heroes = link applies to all colors), then the synergy with Tahir (or another given 2022 HotM) is going to be massive. Grace alone will counter taunts (that are wildly prevalent) and ensure your entire team is immune to fiends (also wildly prevalent).

Everyone needs grace in their world!
Good luck in the portals …
may they show you a Grace

Zagrog also has a minor nearby hit

Anyways this hero can play well with what I have. silvaria will defense debuff 3, c. Francine hits 3 and debuffs ice, and Grace can hit 3… Really would make garjammal out of place on primary green team.

I think her special skill is Malison (archaic word for curse) and not Mailson (no definition I could find). The prelim card I have seen has the former. FYI. 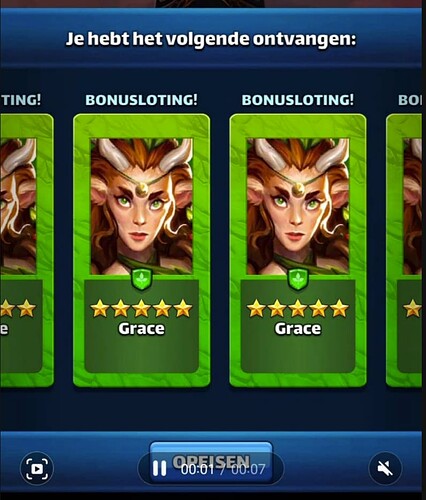 Congrats! Now you can have mono Grace team.

Could you please share her full artwork here? (so that everybody could see how ugly she is?)

The picture is from a teammember who did a 30-pull. He only got 5 HotM and no other 5* heroes. His goal was Sekhmet. Eventually he got her. I didn’t ask after how many pulls.