This thread is for discussing strategy related to Costumed Wilbur, as well as your thoughts on him. 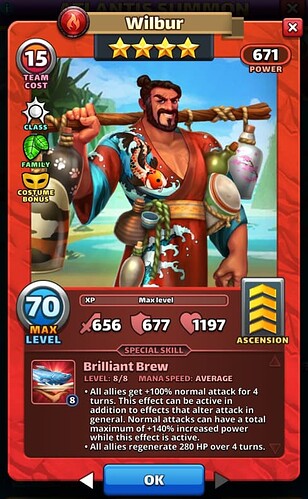 There appear to be no changes to Costumed Wilbur from last-seen Beta stats, skill, and design.

What do you think of Costumed Wilbur ?

This thread is for thoughts and discussion on Costumed Wilbur.

Based on preferences Forum members have expressed, please try to stick mainly to Costumed Wilbur and not wander off topic too much to other heroes.

8 Likes
HeroPlan.io - Tool for tracking your profile's progress, sharing it & to Plan your Hero Use for Class Trials, Challenge Events, Wars, Tavern of Legends Titans AND MORE!
PlayForFun April 30, 2022, 4:59pm #2

Is Costumed Wilbur worth Summoning For?

How many copies of Costumed Wilbur would be useful to keep & Level?

What do you think Costumed Wilbur’s Primary Purpose is?

What do you think of Costumed Wilbur compared to other Heroes?

How does Costumed Wilbur’s Special Skill and Intended Purpose match his Base Stats?

What do you think which version of Wilbur is better ?

Is Costumed Wilbur worth giving Monk Emblems to the original hero?

In Defence, where do you think Costumed Wilbur is best used?

How do you think Costumed Wilbur is best used?

What do you think is Costumed Wilbur worth Limit Breaking ?

If you would emblem Costumed Wilbur then which Emblem Path would you select ?

curious to see how he’ll fit into event teams. Also a good option since Oceanus won’t be in it

Imo, original version is much better, especially because there are already a lot of normal attack boosters. Red lacks one but not useful in event teams if you have only one copy of the hero

I see him more as a secondary booster on titan teams a la Franz since Franz is so hard to get. That is a big boost.

I see him more as a secondary booster on titan teams a la Franz since Franz is so hard to get. That is a big boost.

I have 3 Franz and no Wilbur. Tell my Wilbur he’s easier to get if you see him

I have neither after a long time. RNG is gonna RNG, but the odds are still better, as a non spender in my case, to get Wilbur than Franz.

If RNG says you don’t get him your screwed no matter what you spend.

Are you sure about the odds? It seems to me that on Atlantis portal are many more 4* than in CoK portal

True, but I can flask and grind like hell for coins and get multiple summons every month. CoK comes every other month and, depending on your alliance, if I beat every level I can get a single summon. If I am in alliance that can’t open legendary it can take me 4 months to make a single summon. That could be over 10 Atlantis summons in that same time not taking gems into account.

I see this being an extremely effective costume for titans, especially paired with boldtusk and any elemental defense down hero aka costume marjana.

As for odds, my personal experience has been pulling only 1 Wilbur in over 2 years and I have pulled about a dozen franz in that past couple CoC portals

Ah, Wilbur. One of those 4 *s that are more rare than 5 *s, it feels. So valuable, but so hard to get. Good luck on your renewed chase, all

He’s simply a 4* Tarlak now. Not a secondary but main booster. Will be sweet to be able to go mono red on titans in the future.

I may be the only one who hates regular Wilbur. I HATE shared damage I want to be able to kill the enemy one by one. But this costume is fantastic.

The only reason I see to cap him at 140% instead of 160% like Tarlak/Bertulf/Sergei is because they have Oceanus at 170% and a want bigger difference between the two. 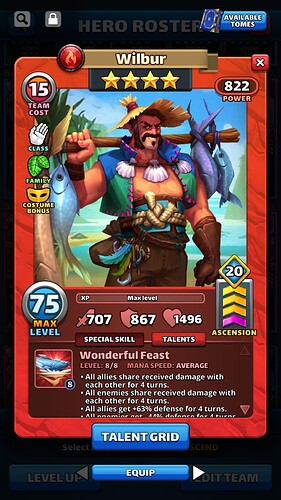 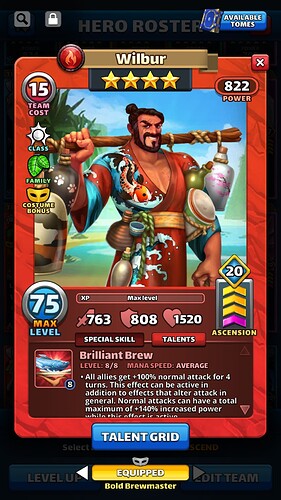 The only hero I really wanted from this new crop of Atlantis costumes. Used him on an 11 Star red titans & boosted my average score over 20K compared to Eu Kong. My new baby Tarlak is going to get some really good use.

It took me forever to get 1st copy of Wilbur, but I only needed 1 10x to get his costume. Quite lucky from the large pool of 4* heroes. That means green titan will be 3rd color I’ll be able to go mono on + I’m keeping 2nd Wilbur as I wanna run both regular and costume Wilbur on greens. Also got C Mnesseus, a rare 3* cleanser, I take it.

I really wanted Kara too… but already did 16 pulls since start of this month and she didn’t drop. Chasing is not worth it, so I better stop spending for a while (even though it would be better top stop spending in this game completely tbh).

I just got Wilbur a month ago which makes his costume releasing now a tad unlucky, but it does have me thinking: would there be a reason to use two Wilburs on a titan team (one costumed, one not)?

You’d probably be sacrificing too much damage out of your titan team, but it was an interesting thought nonetheless! Cheers to anyone who is able to pick this lad up.