I plan to do exactly that on green titan. I don’t think you’ll be sacrificing much damage. -44% regular def drop will make up for Wilbur’s lower attack stat + 100-140% normal attack of his C is good combo. I even plan to replace CB Boldtusk with Shadereave, as C Wilbur also heals. Shader might have lower attack than CB Boldtusk, but I like that 30% crit chance in combination with 30% attack.

Why is it that SGG knows how to make a bunch of great 4s but struggle with the 5s so much? C.Wilbur has upped my Titan game so much that I have started to bench Gazelle and create new Titan teams.

Costume Wilbur adds to an amazing list of 4*s: 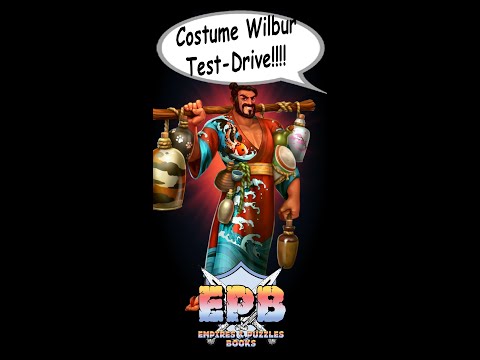 Amazing hits as usual. Personally I put Frantz on every titan team except rare greens, the better your team is, the better he performs.

Are you seriously complaining that the recent 5* heroes are not good enough???

The only problem with 5 star heroes is that normal people don´t ever get them. They are available to serious spenders only and apart from that the only “problem” people keep complaining about is how overpowered those new heroes are…

Apart from that I fully agree, there are amazing 4* heroes and they are fully sufficient to play this game without the need for the crazy 5* heroes

C Wilbur shines in the Fire Omega Quest. With another +100% attack added to the quest +50% attack the heroes hits like a truck. Really important because the enemy is immune to ailments.

Are you seriously misinterpreting my comment and twisting it into what you think I said based on a rather innocuous and vague statement of “great 4s but struggle with the 5s so much”?

well, what does it mean then?

Sorry Gargon, I was probably drinking when I made that post and was a bit snappy

Anyway my statement (which is vague to be honest) was meaning that the 4’s that SGG have released, especially lately are all mostly ideal and or very relevant heroes to use. Obviously LB’ing them helps a great deal here, but specifically most 4’s are worthwhile heroes to keep and use even going back to the earlier ones (Sonya, Li Xiu). In some cases they may be a bit niche, but largely 4’s in my eyes have consistently been good or even great.

The 5’s on the other hand are a mixed bag of usefulness IMO considerably worse than the 4’s, and the disparity in quality is often baffling. Take for instance the recently released Goseck versus the upcoming Klaern. One absolutely worth having for virtually all aspects of this game, the other (Klaern) a very poor hero that makes you wonder what SGG are thinking. Even from a niche standpoint a lot of 5’s have little to no value.

Relative to other 4’s, I would be hard pressed to call most any of them bad or not worthwhile, outside of some very obvious ones like coughShalecough. With 5’s though I could name a great many that are pointless and trash (assuming one had all the 5’s).

That was what I was getting at when I said …

Why is it that SGG knows how to make a bunch of great 4 s but struggle with the 5 s so much?

I guess one can easily find examples for bad 4 stars just like for 5 stars, take Season 5 for example: For both 4 and 5 stars I would say all but the yellow are really useful.
Gargoyles: All 4s and 5s can be useful, if anything the yellow 4 might be the least useful out of all of them.
W3K: Don´t remember all the 5s but I don´t remember a useless one. 4s, well no total busts, but the red minion sniper is rather low on my upgrade list, the healer is OK while Sun and Dun are top class.

For older heroes and heroes of the month I fully agree, but that is by design. Those are meant to be weak or average. Current hotm is an exception, but even she is much weaker than the other taunters.

Anyway I fully agree with your base statement that 4s heroes are awesome, I personally much prefer them over the tedious process of upgrading a 5er.
The only thing I would argue is that for heroes that came out in the last half year you´ll find many more useless 5ers than 4s. Especially since every new 5er that somewhat under-performs gets boosted to the moon (see Lewena, all Villains, all Wizards, all Circus, all I don´t remember who). BTW I would guess Papyros will be the next to get a boost, while the 4s Scarab dude gets ignored and Azmia is already getting a nerf. But I guess that may just be my personal feeling.

Seasonal heroes rarely get buffs. Exeera, everyone.
Papyros is twice the hero compared to her so no candy for him

I was going to take 1 pull and Wilbur costume it’s landing on my bench. Well I saw many people saying original version it’s better than costume version and Frantz it’s better than costume Wilbur. Well I desegree with all those comments because as I saw many people saying there’s many heroes who do boost power (yes) I’m agree with that but non of them are Average speed like Sergei who is a very good hero but he needs to be charged twice to boost power to 100%,then , it’s Miki but his slow speed and very unlikely to get him (I have Miki) lucky me but it’s very hard to get him and on the other side some comments are Frantz it’s better, well I definitely desegree with that,one on the hand and the most important thing it’s he it’s very slow and I have him too but never use him because I use Miki. Now in my opinion Wilbur costume it’s Best on the bench for so many people who doesn’t have any option and he it’s better than most heroes who boost’s attack with 100% except Tarlak who its better than Miki as well follow by Wilbur costume of course

It’s absolutely awesome Wilbur costume with Frantz. I never thought someone will be able to do such off good score

Can anyone help me understand why my Wilbur and his costume are only at partial bonus. The only thing I can think of is it’s tied to the emblems not at 20. Seems like a bug. 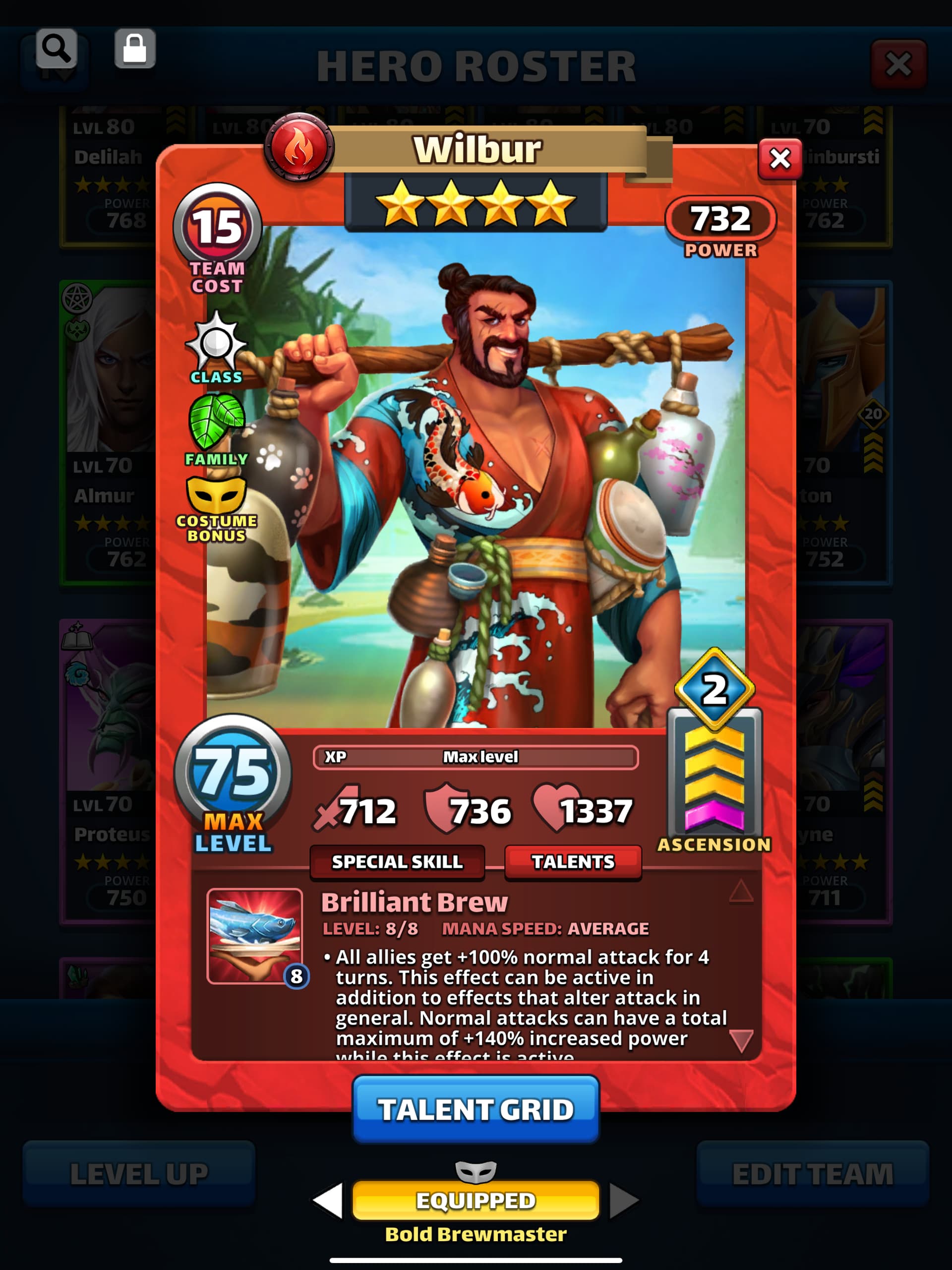 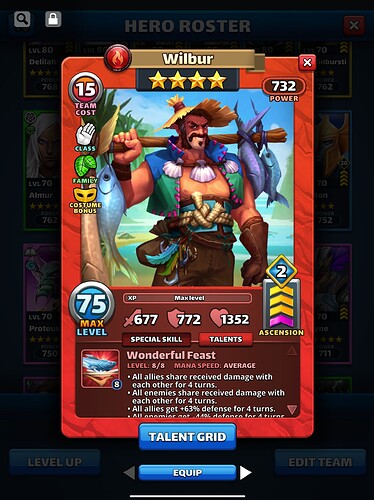 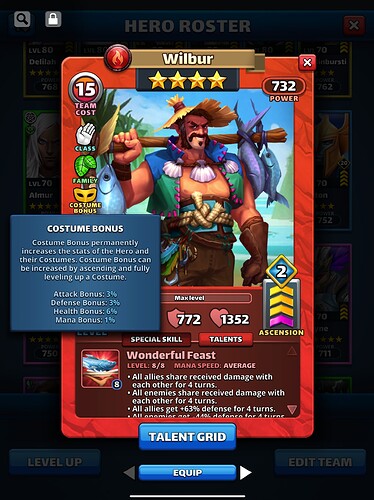 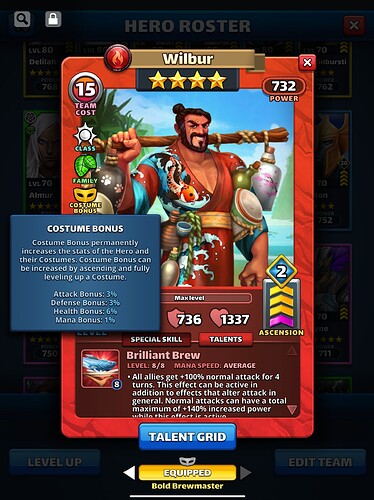 Huh, that´s rather peculiar. I´m not sure why that is - I just read somewhere that ‘newer’ costumes do not give us the bonus that ‘normal’ S1 costumes do, but I thought that was just related to S3 costumes?

I might be lost - there is so much new info and heroes and what not flying around these days, I could have missed something.

costume bonuses are different for different groups of heroes.

I believe those arethe correct bonuses for Season 2 heroes

Thanks @DBC, that clears up my concern. Too bad its not consistent but I’ll survive.

Until recently S1 costumes where the only heroes that had the largest stat increase (ex. the 5% mana +), with a few different possibilities among different groups of heroes as seen in the thread above. The old Challenge event heroes in the Challenge Festival were 1st switched to the larger increase recently and who knows, maybe all will eventually get this treatment after a certain period of time after release. Well, SGG might know if this is the plan. Though, I sure wish they were more clear about the intent and outlook of this related to costumes as a whole. I approach costumes assuming they will not have the highest stat increases and then read the info when released to see exactly what is done with them…as well as trying to stay up-to-date with balance changes. It really can be a lot on top of everything else that’s added