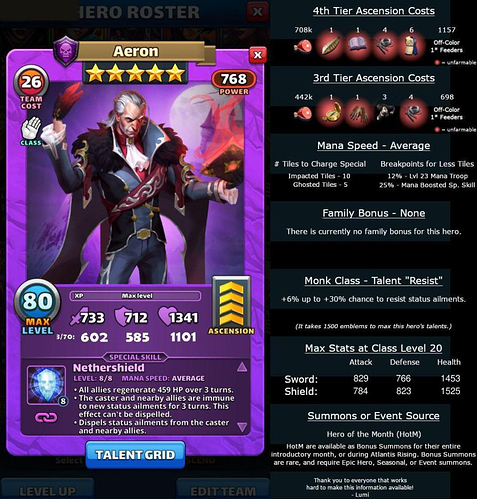 As Aeron has been released for >24 months, he can ONLY be summoned in the Tavern of Legends Portal.
He can also be “Trained” using the Hero Academy Level 10.

It’s important to remember that the Tavern of Legends Portal has the lowest odds for a specific hero of ANY portal… No amount of summoning will guarantee a Featured Hero.

You have a 0.25% chance of summoning a specific Featured Past HotM from the Tavern of Legends Portal (0.0125% for a specific Non-Featured).

Is Aeron worth Summoning For?

NOTE, you can currently only get Aeron from the Tavern of Legends Portal or HA10.

How many copies of Aeron would be useful to keep & Level?

What do you think Aeron’s Primary Purpose is?

What do you think of Aeron compared to other Heroes?

How does Aeron’s Special Skill and Intended Purpose match his Base Stats?

Is Aeron worth giving Monk Emblems to?

In Defence, where do you think Aeron is best used?

How do you think Aeron is best used?

Low heal for a 5* healer. He is now shadowed by costume rigard.
Aeron definitely needs a buff. At his time, there were very few 5* healers (vivca, alberich, delilah and ares) he was the only 5* purple healer and it was what made him used for me.

I always considered Aeron important primarily for the status shield. The healing was a nice bonus.

Makes sense, his heal over time is the same as my costumed Hawkmoon.

This hero needs 612 hp healing for all, and immunity for all.

I have pulled him this Atlantis Rise.
He wont be maxed and will be parked until

I’ve tossed and turned my Aeron over and over again and I cannot find a use for him. How do we get SGG’s attention to this? I do not know any another obsolete 5*. I mean most everyone has a costumed Rigard, or anyone who wants one, really, since he’s so easy to get. And everyone should want one and hit the closet until they got one. Then we have Zulag too who is a duplicate of Aeron. Grazul does pretty much the same too at her own pace. Incidentally I have all 4 aforementioned heroes. And then there is a host of other healers on top of those, and Aeron doesn’t really have a niche of his own, a reason to exist. You would have to have amazing luck to pull him coupled with a lousy luck not to pull anyone better so that you’d end up even using him. And nobody does. You really don’t see him around in defences. I’ve seen more Zulags and he just came out.

this hit me… I’ve been trying to summon for Rigard’s costume ever since it was released, but sadly nope!

I’ve been using Aeron mostly for the status shield, though Rigard normal is still my main healer of choice. Aeron comes in as a 2nd healer sometimes.

The exception is on the world map and quests, where I can use antidotes. Then I put Aeron beside my Springvale heroes (Lepus, Jack O’Hare) so they can abuse their specials without the drawbacks.

And on Titans, as I don’t have costume Rigard then Aeron becomes more useful for the element link.

So I just picked up Aeron from the Tavern summons. Not sure what to think of him. Dont see him much, has he just not aged well or is there something I am missing?

Had been going to do another Rigard while waiting on tabard for Khiona.

Is Aeron worth leapfrogging?

no.
he is usable but definitely not worth the materials.
low HoT and 3 turns only for average speed and the worst of it all is that he only cleanses nearby…

rigard costume is MUCH better in everything

I use Aeron on titans, but primarily because I also use Khiona and don’t want costume Rigard’s attack buff to overwrite hers. You’ll be in the same situation if you max Khiona, however you can just use non-costumed Rigard instead.

Kunchen is my primary purple healer, but I use costume Rigards in wars before Aeron. If you have the costume, you’ll get more value out of a second costume Rigard than a first Aeron.

Thanks guys. Guess I’ll add him to the when I run out of other options with Thoth then…

I’d forgotten about old Aeron in my roster. I pulled him 2 years ago, and he’s never received the tabards. Just now thought he could be a good hero in the back of the double formation. He becomes what he should be buffed to anyway - a cleanse all and protect all.

Has anyone had any success or joy using him there?

Can you add Legends 2018 to the family bonus instead of None ?

Costume Rigard made Aeron redundant. And cheaper to max and emblem.

I think redundant is a bit harsh.

I still use my Aeron from time to time. Fair enough, he doesn’t make my defence teams anymore, but c.Rigard never made my defence team at all. If I had to make the choice I would still use Aeron before c.Rigard in most situations but that’s my opinion

Maybe I should aeron the side of caution and qualify that a bit.