This thread is for discussing strategy related to Xiaotu, as well as your thoughts on Xiaotu. 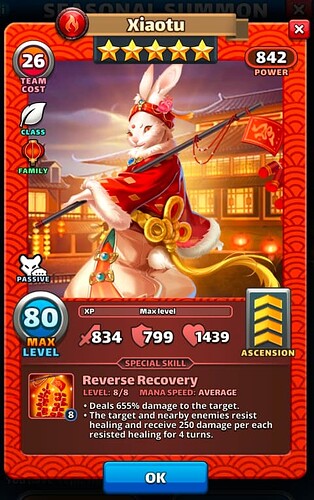 The Hero gives the following Lunar Year Rabbit bonus to the members of the Lunar Year family:

Event Hero Bonus:
The members of this family have additional perks in the Lunar New Year event.

What do you think of Xiaotu ?

This thread is for thoughts and discussion on Xiaotu.

Based on preferences Forum members have expressed, please try to stick mainly to Xiaotu and not wander off topic too much to other heroes.

*NOTE: Summon Results posted without any commentary/feedback at all should be flagged as Off Topic and removed, based on preferences expressed by the Forum community. Please include some comments about what you think of Xiaotu when posting Summon Results. In addition to opinions about Xiaotu, you are also encouraged to include how many Summons it took before receiving Xiaotu (or how many Summons you’ve done without receiving Xiaotu), so other players are presented with realistic experiences of the rarity of Legendary Event Hero.

Is Xiaotu worth Summoning For?

How many copies of Xiaotu would be useful to keep & Level?

What do you think Xiaotu’s Primary Purpose is?

What do you think of Xiaotu compared to other Heroes?

How does Xiaotu’s Special Skill and Intended Purpose match Xiaotu’s Base Stats?

Is Xiaotu worth giving Druid Emblems to?

In Defence, where do you think Xiaotu is best used?

How do you think Xiaotu is best used?

What do you think is Xiaotu worth Limit Breaking ?

If you would emblem Xiaotu then which Emblem Path would you select ?

It’s strange to have a bunny at average. Bunnies are usually fast.

Is this the highest percentage of damage we have seen so far? Or is there a hero that deals more than 655% damage?

It’s strange to have a bunny at average. Bunnies are usually fast.

Killhare would like to have a word with you

Is this the highest percentage of damage we have seen so far? Or is there a hero that deals more than 655% damage?

Killhare would like to have a word with you

That’s the thing. Killhare did. She is still upset that Lepus is Fast and she’s average. To her mind: all bunnies should be max Fast. With most at VF and some at VVF.

I think nobody really wants these heroes. These heroes are just the ones that hard counters waterpipe and M&M. Especially this rabbit that completely destroys M&M

Of course this bunny is wanted. I can picture the top 5 alliance members pacing and pacing to try for them. First choice is tiger cos he’s fast. Failing which bunny will do.

In all honestly, I really hate the passive. It’s a lazy, in your face way to say ‘look we solve the waterpipe/M&M problem. Just gotta pull in our 0.5% portal’

Agree. But that’s Zynga for you. Money in with minimal effort.

This makes me sad, I have mained xiahou dun for quite a while. The one dispeller that’s fun and interesting they just nerfed like that.

Not to mention that new hero Sorrow. Looks like the rabbit/tiger is their answer to those minion summoners
Be rich or get rekt

Zynga sets the meta going forward. They made a lot from minion summoners released to date.

Now they want players to spend on brand new heroes to counter the OP minion heroes to come.

Repeat Step 1 and 2, to keep money flowing in.

They should be releasing minion heroes with a passive that resist being silenced by Tiger & Bunny. That’s how they will continue to milk players who spend.

The shampoo method, rinse and repeat.

Well to be fair, this wouldn’t keep happening if the player base had zero tolerance for nonsense like this. There was a huge backlash when Telluria and Vela got nerfed into oblivion, but then a month or two later it was business as usual.

While not absolving SG of any blame, aren’t we the player base equally as much to blame for the current situation we find ourselves in?

While not absolving SG of any blame, aren’t we the player base equally as much to blame for the current situation we find ourselves in?

Getting a small sample of the player base motivated to do something meaningful is near impossible. Lowering our expectations is the only way to curb disappointment. Then again, if we are expecting this to happen over and over, why are we even playing?

My lawyer said don’t you dare to write what you’re thinking about this hero.

The special has been changed. Instead of 500 damage, it’s 250 now. @PlayForFun

I will say that the special skill animation for this hero is pretty awesome.