This thread is for information and discussion on the Lunar New Year 2023 Summon Portal, and sharing Summon Results. 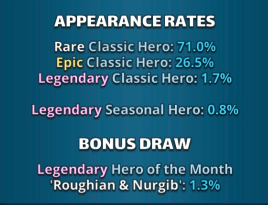 Epic Hero Tokens Can Be Used for Seasonal Summoning

Because of that, unlike Challenge Event Summons, the Summoning Portal for Seasonal Events allows using saved up Epic Hero Tokens that can otherwise normally only be used for Epic Hero Summons.

That makes Seasonal Events the only place you can currently use Epic Hero Tokens for a chance at non-Season 1 heroes.

You’ll also have the same chance at the HOTM as usual when using Epic Hero Tokens.

This portal is like the ■■■■ cherry on top of the ■■■■■■ sundae. 3 portals of nonsense from before and this is another whale portal. What more can they blunder? The two new heroes don’t exist because of another bug? That will be hilarious

With all the silence on SG side about the worst portal ever comments, I’m expecting a big surprise; A portal including a full set of seasonal heroes, 5-7 seasonal legendaries, 3-4 seasonal epics, 2-3 seasonal rares…

That was my suggestion in Beta about this portal, but I am not optimistic about that is implemented

I’m hoping they do a last-minute change and actually re patch a new version with updated heroes. Because this is by far the most pitiful one

true, I’m a little sarcastic and a little hopeful while writing this comment

Can it be a coincidence for a Lunar New Year portal ?

Well, I’m also hoping that they will change it…
I want R&N, so if I don’t pull them in other portals I will use my EHTs in LN portal. 0,5% for 2 new heroes is very discouraging.

agree on this, SG might get rid s1 and replace with s2 instead or some surprise like that. otherwise it will be silly to release a seasonal portal just similar like s1 portal with only 2 new heroes

@Elioty33 could u give us a hint what the portal heroes will gonna be?

After a very dismal Christmas portal and getting nothing better than Holley after many many EHT, I am not expecting much.

2023 + E&P = a very bad resolution.
Best thing i did is i deleted my credit card from my playstore , i feel relieved & less anxious.
I do not wait for the others to support the noSpend movement we all know some people can’t fight their gambling addiction but for me i’m done, E&P won’t get another dime from me.
Fool me once shame on you , fool me " so so many times " shame on me and s#crew me.

Maybe we will see a Hunters-like portal with two lunar heroes + 2 or 4 others from different portals…
For the moment this lunar portal is a joke and even though there will surely be interesting offers, I won’t spend gems for this too much rare rabbit and tiger.

Why not make it portal with ALL seasonal heroes in it, kind of like a mini Black friday portal, but with only Seasonal heroes. Would be nice to be able to pull heroes more than once a year.
I am sure a LOT more people would be spending money on this portal if they could get Alucard, M&M and all the others, than a portal where they get a near guarantee of nothing.
I mean for whales it doesn´t matter they´ll pull anyway, to get the 2 new ones, but everybody else really has no business pulling in such a garbage portal, where only 1 in 200 heroes is of any interest…
Even whales might (have to) pull more if the 2 new heroes are diluted by older heroes they already have…

Maybe they think it would devalue the other seasonal portals? But since they always add new heroes anyway each seasonal portal after this one would still be having interesting heroes (the old ones by themselves don´t often animate people to pull anyway)

Anyway seems to make sense to me, but who knows what makes sense to SG.

But that does not change anything for me, as a VC2P, without 3 and 4*, I am still going to save my gems and tokens.

Thanks for the reporting. I think, rather, I hope they make further changes…this just isn’t enough.

Considering that I have bad luck with 1% chance of event heroes in former NT, ToM, Styx and non-festival challenge event, even 0.8% is way too low for me for heroes that are powerful but probably obsolete in near future. And yes, not even event 3* or 4*, meaning in 99.2% you get nothing new (not counting HotM, which is actually worthvile this time). Pass still.

Thx, I have updated the OP.