Today we get to claim Mystic Rings and a Hidden Blade for completion of Mount Umber. These are necessary ascension mats for 4 and 5 star heroes.

To the new(er) players: complete as much as you can, it is okay if the last stage is too much.

To the advanced players: gets those mats!

Red enemies, so if you’re unsure bring a blue stack. Ulmer would probably be a good 3* hero to bring since he attacks everyone, Kiril and Boril would be good 4* heroes. Valen’s Chilling Slash would be good in the 3* level of heroes. In the later rounds, Triton’s Trident Throw not only deals a lot of damage but it boosts the healing you receive. Very good to have him. 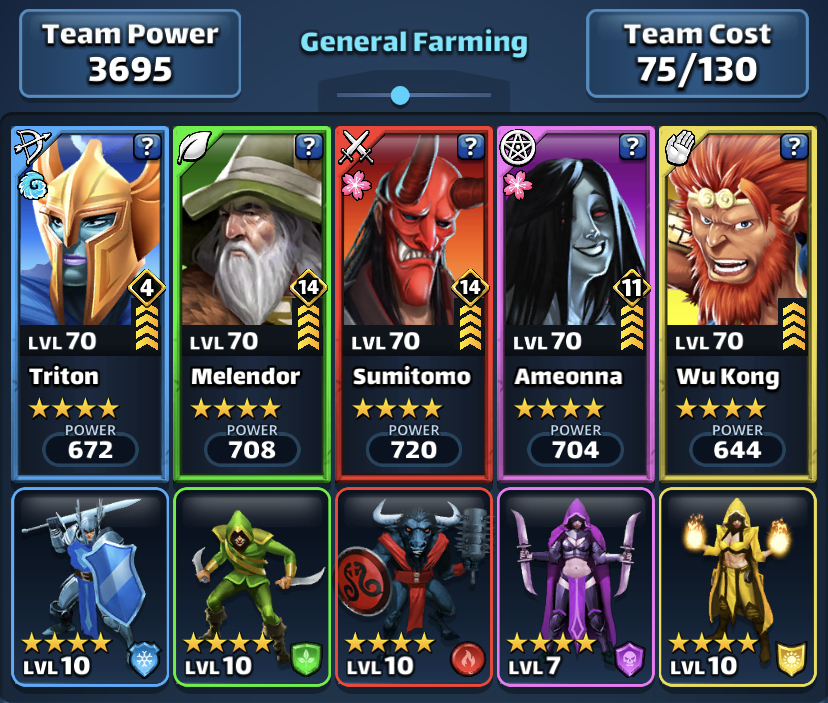 So far I’ve completed 4 of the 5 stages with this team.

FOR NEW PLAYERS:
Some may disagree with this advice but it helped me early on.

If you are on the boss level trying for the rings and you die, 75 gems is worth it to get the rings, you’ll never get a better exchange rate 75 gems is cheaper than the world energy refill (100 gems), and it is best to save that WE for farming.

100% agree, just make sure you won’t come back full health and die immediately either. Hopefully both Dragonian Knights are half health or lower or one is completely dead.

Just adding an information for the new players, I have really struggled in the beginning looking for those Ascension Materials, and Gunnar and Kailani have helped me a lot - Spirit Link and +63% defense all are really helpful. Remember to take mana and heath pots, and bombs/axes/arrows for the first and last stages, and always move from one wave to another with your heroes fully charged. Good Luck!

You can find more specific details about the quest here: 💫 Memento Rare Quests

Also, specific strategy for this quest - the bosses do not apply any debuffs or DOTs, so don’t waste a slot on antidotes. They also hit everyone with their specials, so riposte/counterattack heroes are great to bring, especially Boril, as @originaldaveo pointed out. I actually doubled up and brought both Boril and Cyprian and just breezed through the last level.

Well here is a story …
I had just started the final level to get the rings using Alasie-Seshat-Aegir-Sabina-Kiril (all maxed, most with emblems). Was going to be easy.

I had JUST started and the front doorbell rang, and I could tell it was something I needed to deal with.

To my surprise when I returned after half an hour it HAD completed, and the Rings were mine. I was amazed!

Maybe I’ll just try everything on Autoplay from now on - it seems to be as good as, or better, than me!

Thanks for the 75 gems advise. Probably need them in last stage.

I am waiting for recharge the WE. Thinking of crafung some axes and trying with Danza + 5. Grimm +1, Kashhrek 4.8 and 1 or 2 Ulmers If I go only 1 Hawkmoon would take place. I may be short of attack and I don’t play confortly without fast heroes.

Will finish it later only last level left! Need to fill my monster chest in a few hours! Hopefully get it done before I sleep!
Used amennoa grimm falco kirl jackal
Been no probs!

Finally done. I struggled at first being forced to spend 6/10 mana pots at first wave. Later when specials were casted and board was generous everything was easier. Loading maná and forming a good board when only a mob is left is key.

I had a brain fart and forgot to switch off of the last raiding team I used before I started this quest, so my team was:

Now I’m usually a two-healer kinda guy, so not only did I screw that up, I also brought double green… to a quest with exclusively red enemies. So I’m thinking I might have wasted 20 WE. But these bosses pale in comparison to some of the other rare quests. Compared to the blinding dragons in Shiloh and the hard-hitting vampires in Morlovia, these red dragons are cake. At no point did I feel in danger, even with a bad choice of hero colors (and I got several red tiles, with no red hero) and no mana controller. I realize that for newer players, it will still be difficult, but on reflection, this seems like one of the easier rare quests.

It’s funny you mention that comparison to Morlova and Shiloh. Those bosses hit so much harder and I underestimated that quest until they dropped me like a bad habit and I had to wait 3.5 more hours to try again with a more appropriate team lol. I was embarrassed at first but I’m glad it wasn’t just me.

Not at all. I was feeling all good about my team after maxing Poseidon (first maxed legendary) and heavily embleming some of my better four stars, so I waltzed into Morlovia a couple of iterations ago ready to claim my tabard. Got my butt handed to me by those stupid vampires. Went crawling back to Onatel 3^70 and apologized for forgetting how important her mana control was. She just got darts last Shiloh, and I will not take her for granted again!

Hello,
A couple months ago this quest was difficult for me.
Today, went through it like an axe on a cupcake.
Kiril, Wilbur, Triton, Jackal, Caedmon, all maxed+.
Cupcakes crumbs.

Thanks for this information and it’s what I did. I’m only at L31 and have several 5* heroes at 3.70 waiting on AMs like hidden blades and rings and this is a good way to obtain AMs that I need.

I have been completing Atlantis with these heroes (3 purple and 2 blue), so this played very well and perfectly for me with the enemies being Fire.

My Rigard was not maxed (he was about 4/64) and Kiril was a few levels lower too: 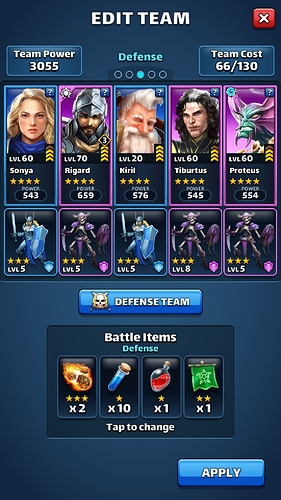 The items are not what I used and I didn’t need anything at all anyway. The above battle items are what I have equipped for Atlantis, not for this event

Mt. Umber with only 4* Heroes

Those rings are hard to come by, so if you dont try because you feel like you aren’t strong enough, watch the video and ask me any questions you think may have. Don’t let those rings slip away!

Check out some of my other videos and don’t forget to subscribe!